Home Techniques and Tips Community What’s the Most Important Lesson Your Father Taught You?

What’s the Most Important Lesson Your Father Taught You? 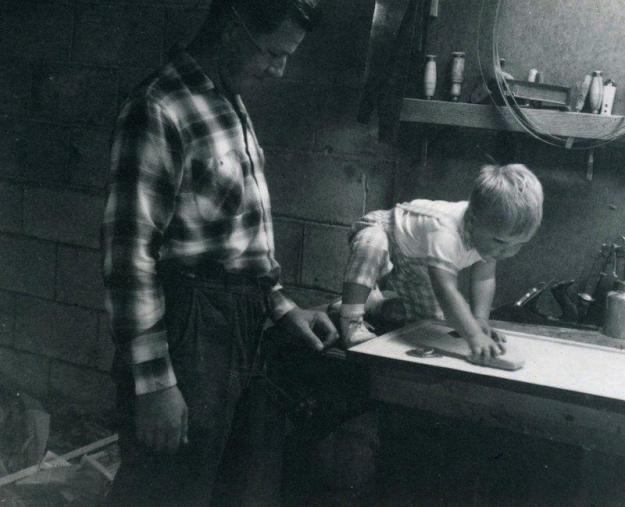 With Father’s Day just around the corner, we’re taking a look at the role fathers play in our lives, as well as the woodworking influence they had on us. Some of our regular magazine contributors and a number of forum members add their thoughts on the important role their dad had in their lives.

Though most woodworkers shy away from using nails, and therefore don’t have much use for a hammer, I look forward to reaching for one of mine. I have a small collection of interest­ing hammers, but my father made the one I usually use when he was in high school. It’s quite small, but does very well at most tasks around my workshop. A smile comes to my face as soon as I see it. I also have a number of hand tools that I inherited from my father’s father. It’s great for my soul to use all of these old tools.

It was watching my dad do small renovations around the house when I was young that got me interested in wood as a building material, and how things were built. That experience led me to a post-secondary education and a fulfilling career in woodworking. — Rob Brown

I never knew my dad, but I was fortunate to learn many years after I discovered my love for woodworking that my dad used to make knives for woodcarvers. I was told they were beautiful, well made and had lovely, comfortable wood handles. Knowing we had a shared passion made my heart sing. — Meredith Nicole

My dad, an auto-shop owner, taught me the most useful lesson sim­ply by exposing me to tools like hammers, chisels, and pliers at an early age. He taught me that I could make (or break) things with my own hands. — Charles Mak

My dad never did any woodworking, as he was too busy farming for a living. He did teach respect for a job well done. He often said, “If you want something that’s well made, and you can’t find it, learn how to build it and make it yourself.” — Mike Pousson

My grandfather used to walk into his woodworking shop and say, “Machines; machines; machines.” He loved machines, and actually invented the first machine to automate the wooden shoe-making process. He knew well enough the reality of mak­ing things purely by hand (that used to be the only way of doing things) and as times changed and technology evolved, he embraced any new idea that would help him produce more efficiently. My father would often say, “Furniture making is a wonderful hobby, but it’s one of the most difficult vocations to make a full-time living at.” — John Wiggers

One of the things my dad said to me was, “Everyone is born with something they’re good at, and something they love to do. Consider yourself blessed when both are the same thing.” — Kevin Wiggers

My father taught me that any fool can make a mistake, but it takes a good man to fix his mistake. — Ryan Inman

My father died this past winter. Since he grew up during the Depression, he was somewhere between frugal and a tight-fisted hoarder. I inherited his tendency to hang onto anything I might find a use for some time. In my shop, this means a big pile of wood that’s just a little too big or too nice to burn. About once a month I spend an hour digging through it to find a piece of wood that’s worth a maximum of $5 and more often about $1. I feel a sense of accomplishment and justification every time I do this. — Jamie Russell

Lately I’ve been thinking about my progression in wood­working. From starting out as a kid, being essentially forced to work in my father’s woodworking business since grade 8, to working summers when home from university and college, deciding to pursue the trade and work beside my father and eventually take over the family business. What bothers me now that I’m 43, and he’s 83, is that I don’t have the chance to work next to him and pick his brain. When I worked for him I was more interested in getting the work done and I was not willing to take the time to talk about all the design aspects of woodworking, and how he approached a job. I guess I thought I knew it all already, but that was a big mistake. Now that I live a few hours away, it’s pretty much impossible to have the chance to work beside my father. I can only hope that my skills and talents grow to the point where I can say, “that’s as good as something my father would have built.” — Andrew Coholic

My dad passed away when I was five. I got his tools and learned to use them. Screwdrivers and chisels were the same to me, so a few things didn’t last. Thirty-five years later, much of what I got has been replaced with newer and better, but I always smile when I see and use his stuff. Last year my father in-law passed away, and my five-year-old son got a full tool­box. Whenever we do something, he excitedly goes to get his tools. He then calls me as he can’t lift the box, but he knows what’s in it and what everything is called. He never wants his tools mixed with mine. — Mark Carruthers

I never met my grandfather; sadly he passed away before I was born. Those in my family say that I inherited his wood­working genes and the tradition continues. He made several pieces for my mother that I would see and touch everyday while I lived at home. While there were les­sons in joinery and design in those pieces, he did more than that. He inspired me to push my skills and reach for a higher level. — Steve Der Garabedian