Home Techniques and Tips Profiles Where Do Ideas Come From? - Stephen Hogbin's Canada

Where Do Ideas Come From? – Stephen Hogbin’s Canada 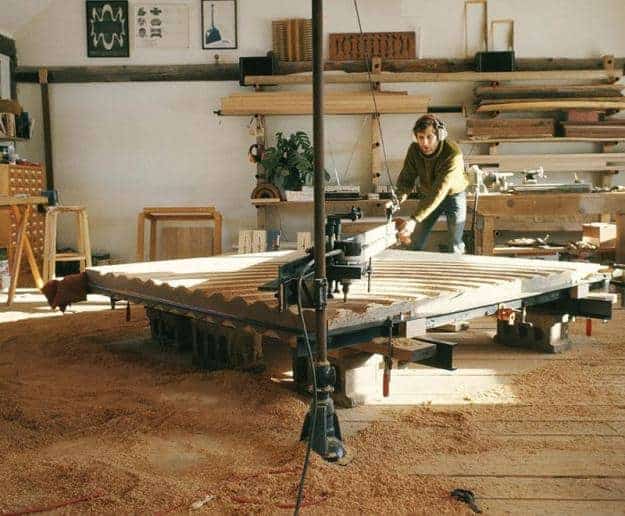 Stephen Hogbin is one of Canada’s most accomplished, skilled and celebrated woodworkers.

Raised and educated in England, Stephen was first exposed to Canada when vis­iting EXPO ’67 in Montreal and then travelling on to visit relatives in Grande Prairie, Alberta. “Blown away by the quality and energy of the fair”, the sheer size, diversity and contrast in cultures, landscape and pace was all very exciting for the young British tourist.

In his mid-twenties and back in England, a lust for new experiences urged him to travel the world. As a first step he applied for a teaching posi­tion in the Wood and Studio Furniture program beginning its second year at Sheridan College of Applied Arts and Technologies under the directorship of Donald Lloyd McKinley. He was accepted and his time there was rich and rewarding. “The influences were hair-raising … three Americans, one Canadian and myself teaching a brand new craft and design program”; one lan­guage, vastly diverse backgrounds and students from across North America thirsty for interactive knowledge all con­verged in one place and time.

His Canadian experience stopped Stephen in his tracks; he decided to stay in Canada. After two years of teaching, he set up a studio-workshop with furniture maker Stephen Harris to create an income drawing on his design background and the many notions he wished to develop within the vibrant com­munity of craftspeople he’d become a part of. Focusing on a creative process he’d developed at Sheridan College and on a small lathe owned by Harris, he blended theory and prac­tice to see how a living as a “maker” could be earned. He turned some pieces as large as the lathes capacity to prove and develop his notions. Not long after, realizing “size matters”, Stephen resolved to build what we now know as a monu­mental machine: his “Truck Axle Lathe”, developed over the course of a year with input from his father-in-law, Bud Thomas and a 3/4 ton truck axle.

Stephen’s training was as a modernist; past styles were to be considered but, rather than creating for the privileged few, designing remarkable, affordable, enjoyable work for pro­duction and a broader public was more important. Strongly influenced by Thonet furniture “as a single technology thor­oughly explored”, Stephen’s first explorations in production were at the lathe, where objects were born and finished on one machine. Some years later, responding to a commission to cre­ate a 176 foot long “screen” for the Toronto Public Library, his “variable arm milling machine” was born; the limitations of the lathe resolved by moving the machine rather than the material but still applying the “one technology” principal.

Larger Than Life
In 1975, on his truck-axle lathe, Hogbin turned this huge faceplate form, shown here being cut in two to create the headboard and footboard for a single bed. 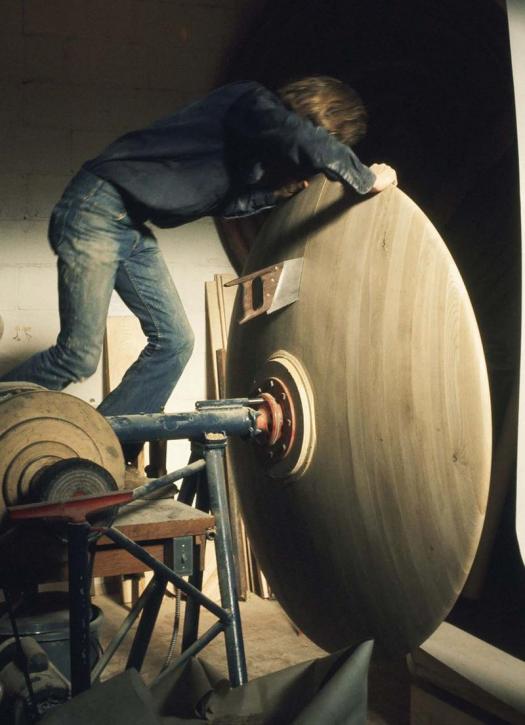 Serious Business
In 1978, Hogbin was experimenting with making large turned objects with his truck-axle lathe. This chunk of walnut became a set of stools. (Photo below by Rudi Christl) 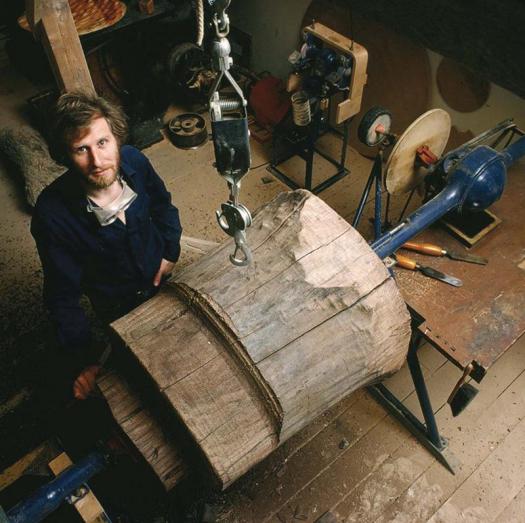 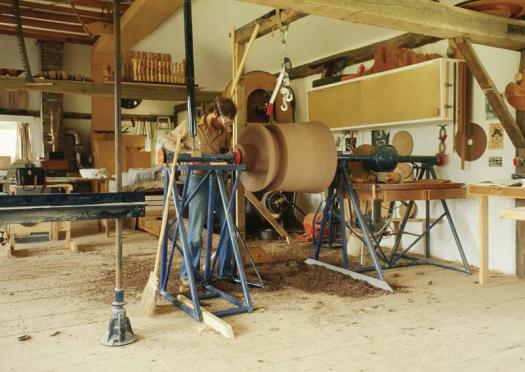 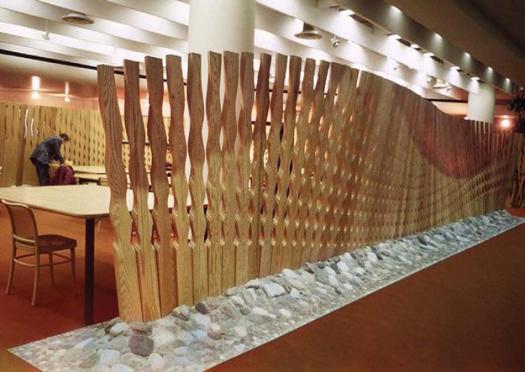 Connections and Transitions
These floor tiles are individually carved with a small milling machine using several round nose bits. The pattern progressed through the floor and the stair carpet. 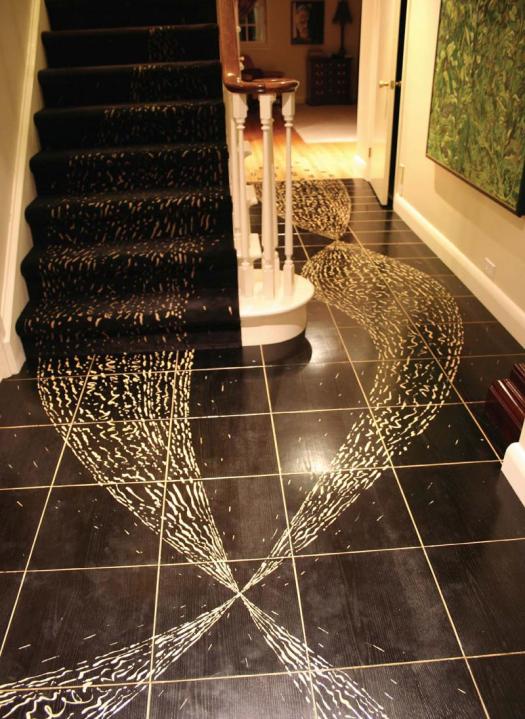 Nature’s Shapes
Always looking to nature for design inspiration, this split turned salad bowl made of huon pine was made in 1975. It was based on the natural form of a seed. 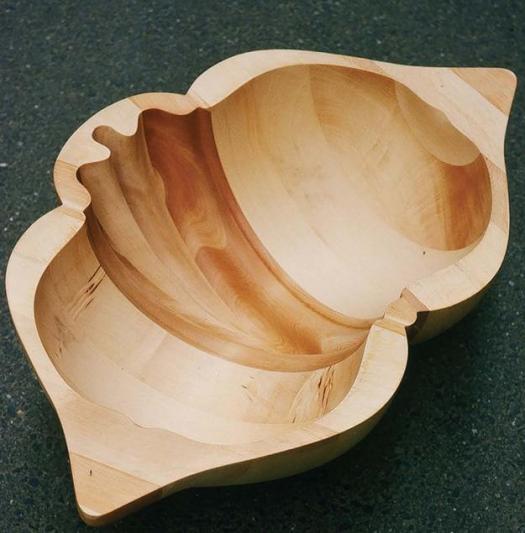 Conservation
“Boardwalk Surround” is from a 1996 series on conservation and is from the collection of the Tom Thompson Art Gallery. 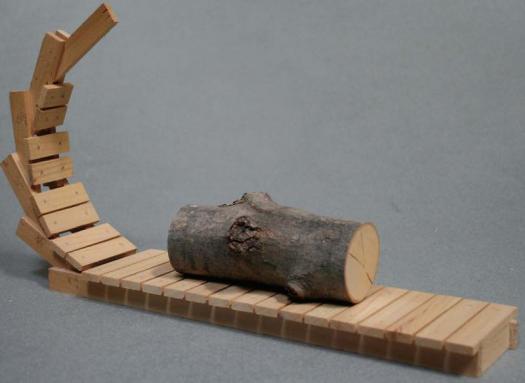 New Work
One of Hogbin’s pieces from 2011, this screen is a combination of turnings and CNC router profiling. 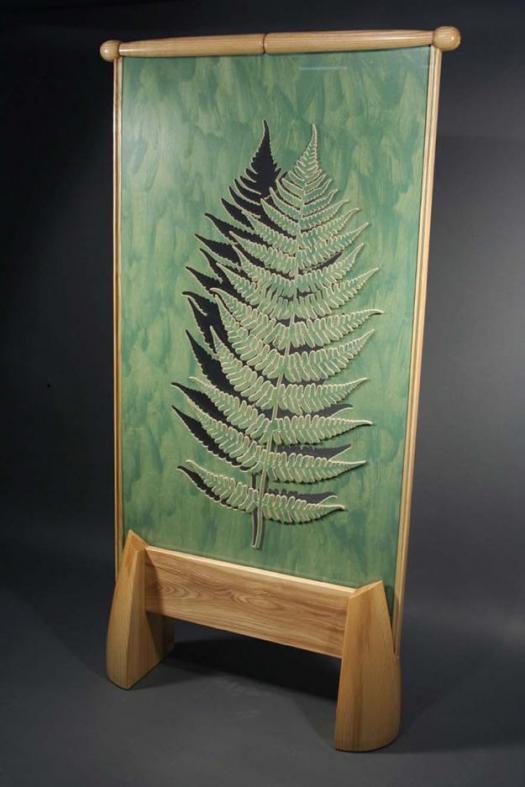 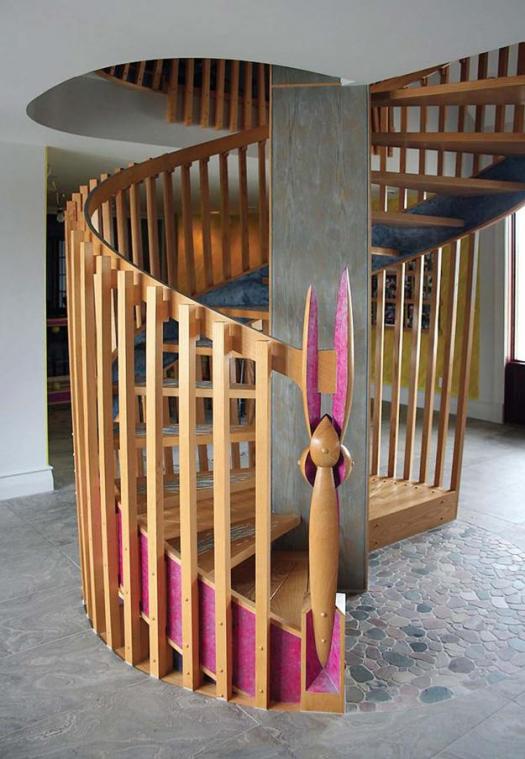 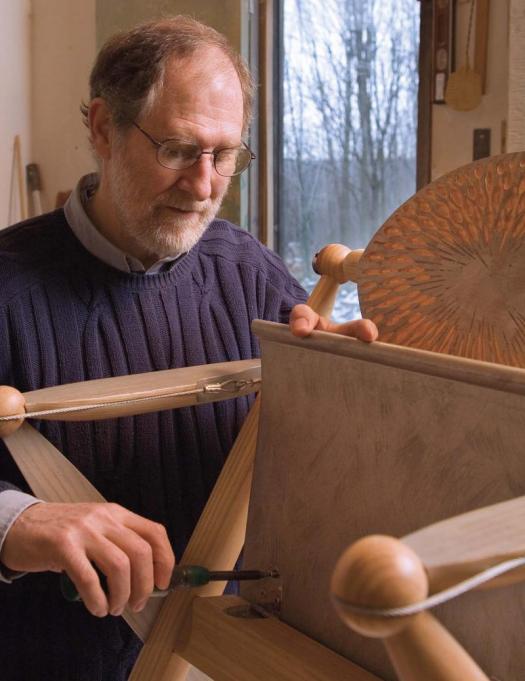 Always inventive, Stephen responds to opportunities that allow him to bring fresh solutions to the needs and circum­stances he’s presented with. Whether it’s responding to the energy and enthusiasm of eager students by developing new teaching methods, creating new machines and methods for expression and translation of fresh ideas or authoring books to expose others to his way of thinking, Stephen always provides novel approaches and clarity of thought for all who interact with his “product”.

“Everything is an influence if you’re looking for it,” he says. Constantly alert to the impact and influences of “new rela­tionships and connections”, Stephen’s playful mind seeks “the potential of all experiences”. Teaching caused him to pon­der the relationship between learning and creativity then how creativity might best be taught, leading to development of his “four-part quad diagram” method of learning.

Teaching has been a balancing act for Stephen; one side pro­viding methods, frameworks, guidance, encouragement and inspiration, and the other, privately, being a solution finder; a role he prefers. Stephen found his early years teaching and devel­oping programs at Sheridan College rich and rewarding. Later, at the University of Toronto, College of Education, he spent one day a week teaching teachers how to instruct at the high-school level. This was balanced with time in his studio-workshop pur­suing invigorating ideas with turned and cut forms, a lifestyle that offered “consistency and continuity for the creativity”. Years later, he spent a decade teaching at Haliburton School of the Arts; a month of one-week sessions delving into the relation­ships among art, craft, design and science.

“Ultimately, most things in education get reduced to words rather than screams of frustration or satisfied grunts in the stu­dio workshop.”

His reverence for nature plays heavily in his inventiveness. Revealing the patterns of growth, “the life force” within natu­ral objects fascinates Stephen; his thoughtful translations have been far more fanciful and dynamic than their origins. Witness his examinations of red cabbage, gourds, nuts, eggs, and even wood in almost all of his lathe-generated work, from salad tossers to furniture and architectural appointments.

In the ’80s and ’90s, Stephen also explored tree forms through several large outdoor installations and, as with his lathe work years earlier, created small explorations that later inspired larger “boardwalk”-themed works; in particular, a lengthy installation at Haystack Mountain School preceded by being shortlisted in a national sculpture competition in Saskatoon for a public “play” path to be enjoyed by young and old alike, symbolic of a journey culminating in a rock and a tree.

Surrounded by the water and trees of his Bruce Peninsula studio-workshop, these elemental influences have been “a recurring theme” in his work. Two decades after the instal­lation of his screen within the Toronto Library, Stephen was asked where a client might locate the panels needed to make a pressed tin ceiling; he offered to carve one from wood and his next interior installation began. With his variable-arm milling machine, he carved “surfaces with rhythmic texture reminiscent of the ripples in sand or the surface of water”.

Ceilings, stair treads and floors became canvasses for explor­ing these ideas. Then more lathe work: a staircase newel post and balustrade. Other commissions evolved, such as trans­forming an entire home interior over a three-year period, creating staircases, fireplaces and furniture. This was a “mind expanding” experience that enabled Stephen to make many objects from one material and explore any subject. Doing as he was taught, “to do one thing really well and then expand out”.

While so many of us have been influenced by Stephen’s pub­lic and private installations, the work he has created for retail sale and gallery exhibitions, many more have felt his influ­ence through his published work. From his instruction, design and creative experiences have come much valued books, most notably “Appearance and Reality: A Visual Handbook for Artists, Designers and Makers” (2000), which Stephen feels is the great­est contribution to education he has made here in Canada. Other titles, Wood Turning: the Purpose of the Object (1980) and Evaluating: The critique in the studio workshop (2008) were valu­able to Stephen as a means of self-exploration, while also offering much to his readers, allowing us to witness creat­ing in wood through his lens for our own evaluation and development.

Mentor – n. – a wise and trusted teacher or guide

Privately, mentoring has been very satisfying, both for Stephen and those fortunate enough to have been assistants in his work­shop for a few months or years. This is “where words, actions, objects and subjects really come together well”; where break-time chats, understanding the project at hand, and applying procedures effectively for a quality outcome culminate in a won­derful idea realized. Good times well shared.

Publicly, Stephen has greatly enriched our Canadian crafts com­munity, constantly contributing time and energy to numerous Provincial and National organizations, plus curating exhibitions and showing at far too many galleries and events to mention here; all acts of public mentorship.

Throughout, he has eagerly shared, exchanged, inspired and responded with vision, kindness and clarity. Offering fresh ways of seeing, challenging our thoughts and encouraging us to think about alternatives while offering strategies to develop our creativity. His lathe work has been hugely influential here in Canada and internationally, inspiring us to act on what might be created after the turning may be the plum.

For more on Stephen Hogbin, visit, intersectionsstudio.com. To see a timeline of his work, visit ccca.concordia.ca/artists and look him up under ‘H’. 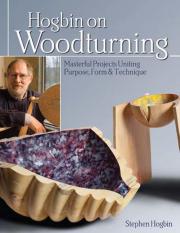 One of the many projects discussed in celebrated Canadian wood­worker Stephen Hogbin’s latest book is based on his piece entitled “Cornucopia”. Fittingly, this new book is a veritable “horn of plenty”, offering far more to the reader than first imagined or expected.

Refreshingly, “Hogbin on Woodturning” is not a traditional ‘how-to’ book. While exceptionally instructional, it’s written for an easy read, often autobiographically, but featuring a value-added text, each page rich with personal anecdotes and real-life lessons.

Presented in waves, inspiring background text and colourful imag­ery, followed by detailed visual instruction spiced with unexpected gems, then capped with enticing examples of alternative ways all readers might consider each project, this splendid book is hard to put down.

It will be welcomed by anyone interested in woodworking, especially turning. For the aspiring novice, Hogbin shows how wonderful things can come from humble beginnings with basic tools, materials and equipment. Creative turners or cabinet-makers also will appreciate how Hogbin broadens our creative points of view from first thoughts about any project through its purpose and ultimate delivery or gifting. No matter whether you’re looking for new projects to make, new dimensions to add to your work or an invigorating fresh perspective, at $24.99 “Hogbin on Woodturning” is bound to satisfy.

Editor’s Note: Stephen passed away peacefully on January 13, 2022. He will be fondly remembered by many in the woodworking community for his remarkable talent and seminal influence on woodturning in Canada and internationally. 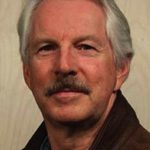 Whether it is joinery or turnery, Mark has enjoyed designing and making furniture, decorative and functional items and home remodeling ... anything to do with woodworking, for over 35 years. 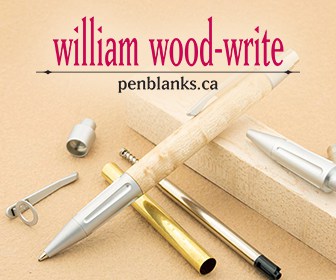