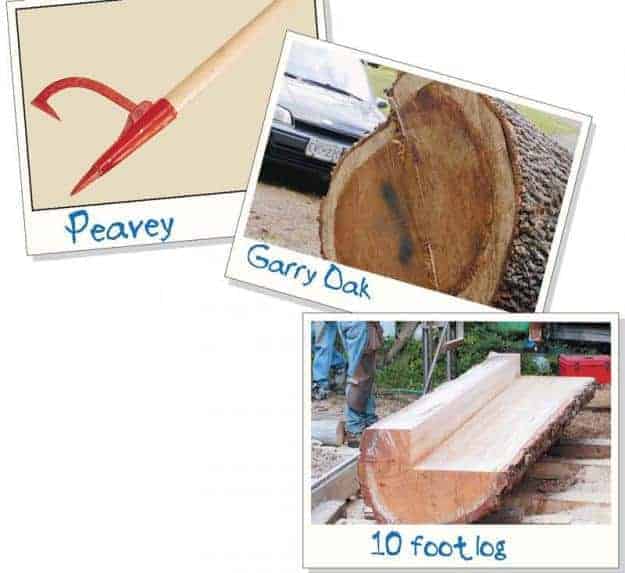 The Victoria Woodworking Guild, which has more than 100 members, organized what we call the “Wood Recovery Team”.

Of all our club activities, this is one of the most interesting, and beneficial. Several years ago our director, Doug Rhodes, established relationships with the arborists who control the community’s cutting permits, the municipal workers, and the private companies that do the takedowns. As a result, the Guild is now alerted when trees worth milling are about to be removed in our local municipalities and we salvage furniture-quality wood from the trees. Without our intervention, the wood would end up in fireplaces or landfills.

Much of the timber is comprised of indigenous species such as oak, arbutus (madrona), big leaf maple, yew, and all the softwoods. The early settlers in this region also planted a lot of imported varieties; so add to that mature English walnut, cherry, beech, birch, and others.

My first experience with the Wood Recovery Team occurred last November after a developer purchased one of the few remaining holly farms within the city limits. Before clearing the property, he offered the Guild all the wood we could remove. The necessary arrangements were made, and on a Saturday morning, after a commercial crew had cut down the hundreds of trees (the largest useable logs were about 6-8 feet long and 8-10” in diameter) about 20 of us went in to salvage them. By mid-afternoon, we had loaded about 400 pieces. They were then driven to an empty garage and stacked until a sale could be organized.

A huge Douglas fir also had to be taken down, and was ours for the taking. The log was about 30 feet long and 4 feet in diameter at the base. As a transplanted easterner, I couldn’t imagine how we might take such a weighty tree away. The team, however, had no difficulty. After a brief conversation, two 14 foot sections were cut out of the log. Each was still large, awkward, and heavy, but soon one of the men returned from his truck with several odd looking tools called Peaveys.

Peaveys are heavy ash poles ending in sharp steel tips. Poised above the tip is a hinged steel hook at the end of a curved tine – much like half of an old ice tong.

Two of the men stuck Peavey tips into one of the logs, pushed the hooks into the bark, and pulled on the handles to set them. With a couple of people pushing each of the Peaveys in opposite directions, the leverage and grip enabled them to roll and turn the log, and then roll it to one of the heavy duty trailers. A come-along was then hauled out. A ramp was built, the cable hooked around the log, and one of our crew started to work the comealong. With a bit of pushing and shoving (to keep the log straight) it was drawn up and secured on the trailer. The second piece soon followed, and they were taken to a property about 30 minutes away for later milling. 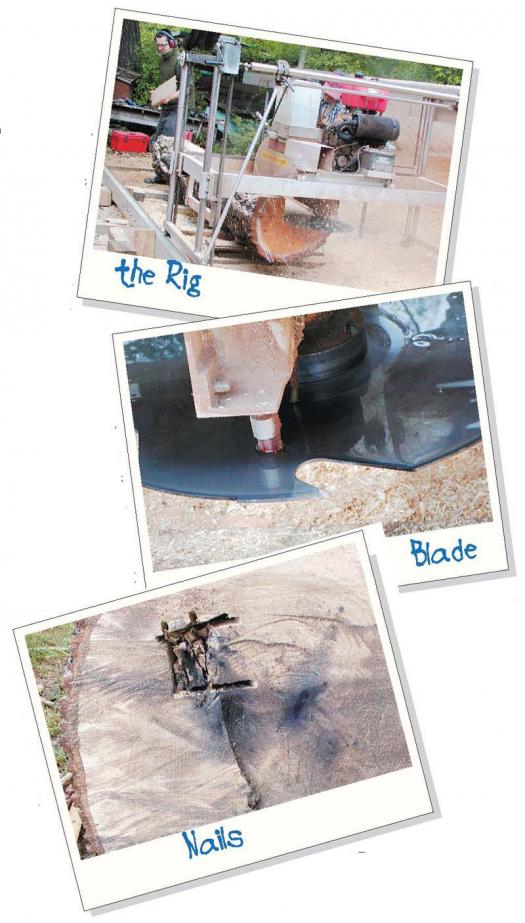 The following weekend, wood recovery volunteers showed up at the holly storage site for first pick of the pile. On the weekend after that, other members of the Guild were able to purchase what they wanted. There was more than enough for all, at a price of “a Looney a lump”. 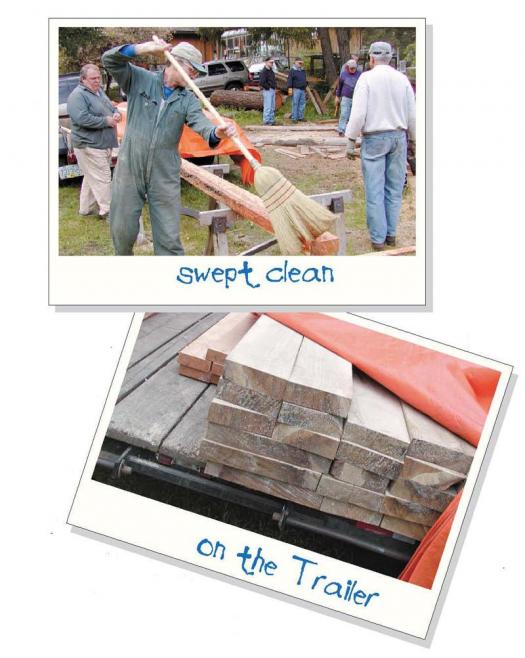 A couple of months later, the team reconvened at the home of one of the members who had constructed a 1,200 board foot drying kiln under his back porch. It was time to remove a huge stash of arbutus and beech. With considerable care to avoid contaminating the surfaces with any grit, that could damage planer and jointer knives, the wood was stacked and a couple of graders measured and marked both the board footage and the quality. The kiln was then reloaded with another 1,200 feet of beech and arbutus. With the dried wood ready for sale, the volunteers again got first pick. The other Guild members were able to purchase what remained. Pricing is based on recovering the cost of milling and kiln-drying (plus a small premium which is donated by the Guild to local charities).

The Guild’s most sophisticated wood recovery operation to date was when we had volunteer crews operating in two different locations simultaneously.

Team One was at the suburban home of the sawyer, where the smaller logs had been delivered earlier. The diameters of the oaks there ranged from about 2’ to 4’. This Garry Oak was about 30”. The objective was to produce quarter sawn furniture quality wood using a nifty circular saw mill. With chains around the ends of the 10’ logs, a front-end loader was used to lift, carry, and place them between the saw’s rails. Muscle and wedges put them in the proper horizontal and vertical planes and kept them there. 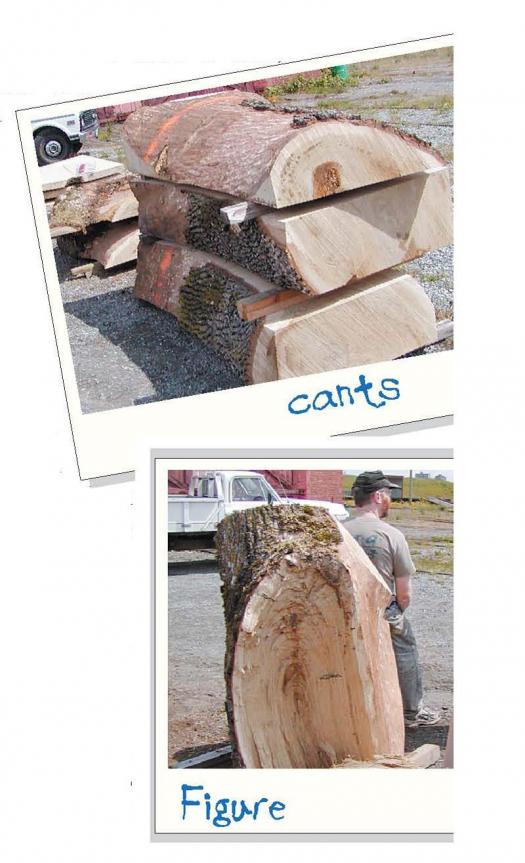 Here you see one of the small fir logs being sawn. The rig is simple, but impressive. The blade is attached to the arbor with countersunk screws, ensuring that the outside face is dead flat. When the horizontal pass is complete, the saw rotates 90º and positions itself exactly 8” in from the previous edge. With this set up any size lumber up to 16”x16” can be produced by sawing in from both sides.

The carbide tipped blade is water cooled and driven by a gasoline engine.

A major challenge associated with city wood is nails, and other assorted bits of metal. At least with the oaks, the tannin reacts with iron and produces a black stain to provide a clue to their presence.

In this log, the nails had obviously been driven in about 30 years ago. We later determined that they were originally used to secure rungs to a treehouse (or something similar) as they were at regular intervals all the way up. These nails ruined my saw chain, but the carbide headsaw cut through them with relative ease. Also, because it only has 6 teeth (unlike a bandsaw mill) it isn’t prohibitively expensive to repair even if teeth are damaged.

The sawing process is actually low tech and, as the cut is completed, the volunteers manually remove the plank to a pair of sawhorses where it is swept clean. After that it is stacked on the trailer for transport to a temporary storage area until the sale. (Note: Garry Oak is a fairly rare species, unique to the west coast, that tends to crack if put in a kiln, so the buyers will air-dry it themselves.) Here’s some of the early morning production of beautiful 3”x8” material which will be re-sawn by purchasers. The tarp protects it from drying out too quickly in the direct sun.

Team Two was at an old industrial site in the city where the really big oaks had been taken. They were 5+ feet in diameter and it was hoped that they would yield figure. Because the bandsaw miller had to leave early, the team decided to use an Alaskan chainsaw mill to produce large cants for later re-sawing. Moving multi-ton chunks of wood around is much easier when you have the right equipment. We had a bit of misfortune when one of the frame pieces on the mill cracked about mid-day. Without it, it was impossible to finish everything, although some very large slabs were produced for later re-sawing. Note the metal detector lying on the pile of crotch slabs. Some of the cants were quite large. One piece will yield some lovely figure. 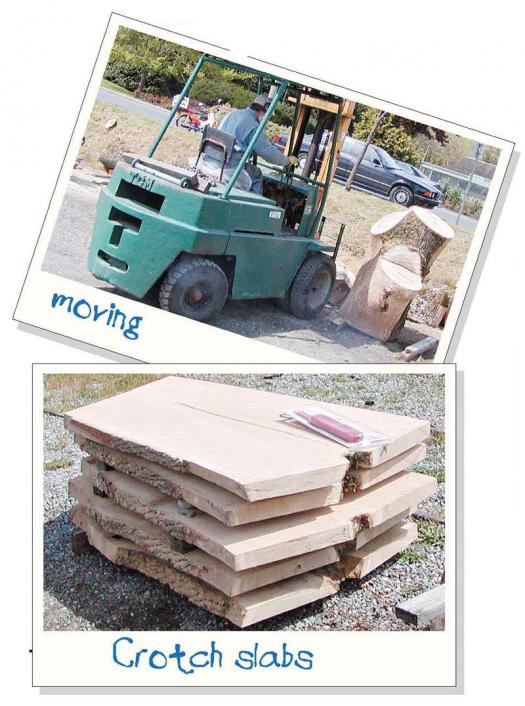 During that one day, I’d guess that Team One produced more than 1,000 board feet of finished quarter-sawn oak in 3”x8” and a few pieces of 3”x16” (plus about 200 board feet(BF) of furniture grade fir in 3”x8”). About 15 oak turning blanks also came out of the pile. Team Two, despite bad luck with the mill, produced a couple of hundred BF of crotch figured oak, about 1,200 BF of cants to be re-sawn, and a residual pile of smaller pieces with potential for veneer and turning. Some of this lumber will be donated to the local Community College woodworking program (who provide space for our guild to meet). Because no cost was incurred for a kiln, the price to members was about a buck a board foot. Not bad for premium quarter-sawn oak.

The key to a successful wood recovery program is having the right leader. It’s a tall order, because they need the inclination, time, and personality to build and maintain relationships with local tree cutters. They also have to organize the equipment and people to do the work. As the text and photos show, it is a considerable challenge, requiring access to an extensive range of resources. Any organization that decides to take on such a task, should start with modest expectations, build slowly, never take on more than can be achieved without fail, and grow into the larger projects. When a tree is to be taken down in a city, the logs must be picked up to meet the cutters’ schedule and removed to a location where they can remain until it is feasible to saw them. Failure to pick up logs on time will quickly put an end to your clubs credibility and your wood recovery program.

On the other hand, in addition to being ecologically friendly, logging the urban forest offers tangible rewards. Not only access to cheap furniture-quality hardwoods, but pleasure. Team members work hard, but always have a great day. The best indication of that is that there are always more volunteers than necessary. If your group can marshal the necessary equipment, it’s an all-too rare “win-win-win” arrangement.