Home Techniques and Tips Wood Chuckle A bird, a daughter & a garbage can

A bird, a daughter & a garbage can 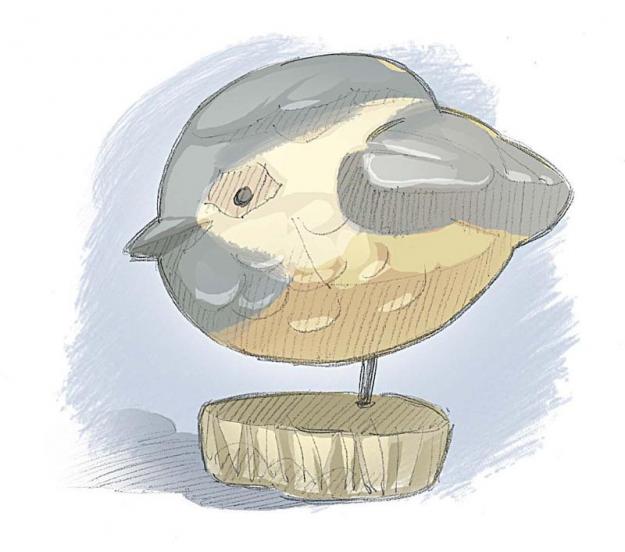 Welcome back to the ongoing saga of how I became a woodcarver.

Like most carvers, I have gone through a number of phases in my carving career. Admittedly, my totem pole calling only lasted for a single project but other aspects have con­tinued long enough to fill box loads, the occasional woodstove load, and every closet, shelf and cabinet in the house and shop with ducks, songbirds, whales, people and a large number of objects that can only be described as ‘objects.’

And an elephant! Thankfully, not full size.

To be truthful, each new phase pro­duced a large number of unidentifiable objects until I became proficient at carving whatever it was I was attempt­ing. Like many carvers, I began carving ducks and geese, primarily because there are more books about duck carving than any other subject known to man.

My worst flaw (as a carver, I mean) is that I don’t like to start with the begin­ners’ projects like normal people, but with the most intricate carvings at the end of the books. You know the ones I mean, the carvings that take ‘Best of Show’ or ‘Best Woodcarving Ever in the Whole World Including Anything Ever Done By Michelangelo.’

Those are the carvings I strive to emu­late. And then fail miserably and get mad and start at the beginning where I should have gone in the first place.

A few years ago, I sorted through 25 years of those failed carvings and heaps of woodworking stuff that seems to accu­mulate. It all needed sorting, packing or discarding in preparation for a move to a new house. Heck, it was a move to a whole new world (those who have lived in Western Canada and then moved to Ontario will know what I mean).

Deep in a box beneath years of dust, shavings and woodchips was a carving of the first chickadee I had ever carved. Admittedly not a great carving, this little guy looked enough like a chickadee that almost anyone could tell what it was if giv­en a broad enough hint. Something along the lines of, “It’s a chickadee, dummy!”

The little bird was the right size and shape but appeared to suffer from some horrible lumpy disease; something like the mumps but all over his body. I held that little carving in my hands and turned it over and over, trying to fig­ure out what I had been striving for. Nowadays, I have a hard enough time figuring out why I’m climbing into bed let alone why I did something 25 years ago, so after a short ponder I tossed the bird into the garbage where he belonged, never to be seen again.

Unfortunately, I hadn’t counted on Dyana, my Emergency Backup Daughter, or her penchant for rescuing anything she deems to be sad and/or lonely. This can include ugly wooden birds or the last piece of paper in a notepad. Her heart is good, her taste is bad, and her common sense is non-existent!

Try as I might, I could not convince her that the little chickadee did not feel hurt and abandoned just because I had thrown it away. Nor would it be sad and lonely in the garbage can. (I almost made the mis­take of telling her all the other carvings in the garbage bin would keep it company but she would have cried her little heart out at my cruelty. And then she’d sneak back and rescue them all).

I finally agreed to let her keep the little bird, thinking I could always throw it away once she had forgotten about it.

Eighteen years later and she still has that stupid, ugly little misfit of a chicka­dee. Today, she lives in Africa and if her last e-mail is any indication, she’s busy collecting herself a new husband. Hopefully he’s not as lumpy and ugly as that stupid little bird.