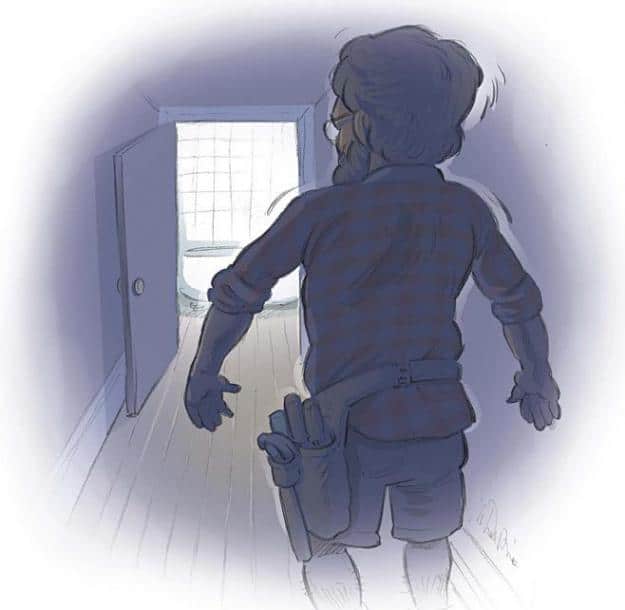 Since moving to B.C. last year, my situation has changed some­what from the happy-go-lucky woodworker I used to be. I’m a slumlord now!

Since moving to B.C. last year, my situation has changed some­what from the happy-go-lucky woodworker I used to be. I’m a slumlord now! My wife and I bought a duplex in a lumber town about a two-hour drive away from where we live in B.C. We bought the building so that we wouldn’t have to work any more. The rentals pay for the mortgage on the duplex, as well as on our house. Sweet deal! I highly recommend it. The only problem we’ve noticed is that the rents don’t quite cover repairs, and as all homeowners know, a house always needs repairs. A duplex, therefore, by its very nature and status, needs double the number of repairs. (Duplex: A Latin noun meaning double the damage, dou­ble the expense.)

Anyway, we recently had a tenant move out of one of our apartments: a nice young lady who was about to have a baby and whose doctor recommended she and her new baby not stay in a house that had a little mold in the bathroom, slowly growing down the hall and heading towards the kitchen. I said she was nice. I never said she was a great house cleaner.

The house was in relatively decent shape other than the aforementioned mold problem, which we assumed could be easily dealt with using a weed-whacker and the judicial application of a good fun­gicide, a drum of germicide and possibly some homicide. The latter applied to the realtor who had recommended we buy the building in the first place.

A more complete survey of the problem indicated that the entire job could be very simply remedied in an hour or two for about seven dollars worth of bleach and a scrub brush. But as every homeowner or landlord of any persuasion knows, there is no such thing as a simple repair job. A case in point is the recent repairs to the Bolshoi Theatre in Moscow. That sim­ple reno job took three years longer than allotted for and came in over budget to the tune of a little more than one billion dollars. I had been hoping to keep things a little lower than that, but if the Russians can’t manage to do things right, what pos­sible chance would I have?

As you may imagine, it was with some trepidation I began the job of repairing the bathroom. I carefully peeled away the fuzzy, greenish-black caulking around the tub that was supposed to have kept the water from damaging the wallboard. It looked as if the caulking had been applied using a trowel of some sort, possibly one normally used for levelling a very large cement floor such as a gymnasium or curling rink. Maybe a short section of interstate highway.

Once the caulking was removed, I was better able to judge the state the wallboard and tub were in, what I could find of it under the mold. It wasn’t good. Not pretty at all, in fact. Water seep­ing through the rust holes in the tub had rotted every nail in every stud to the diameter of straight pins. At least in the studs that still remained. I knew I could easily deal with the places in the wall I could push my finger through, but when I slipped and fell against the wall and ended up on the floor of the closet in the bedroom next door, it became fairly apparent that my simple plans for a quick cleanup and an application of fresh caulk­ing wasn’t quite going to cut it.

I hit Mike Holmes’ number on my speed-dial but hung up before he could answer. I knew I needed someone bet­ter. Or at least someone better dressed. No! This was one job I needed to han­dle on my own.

(To be continued. Probably forever)