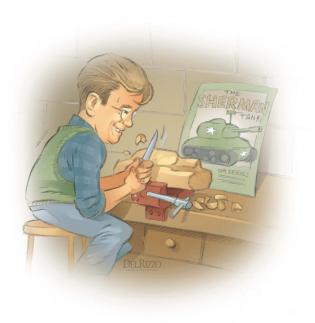 For most people, carving is a solitary pursuit. Time spent alone down in the basement or out in the shop – and at least once – sitting on the couch in the living room watching the woodchips, sawdust and shavings fall to the floor while listening to the soft swish as a razor sharp gouge slices cleanly through a block of butternut or basswood.

For those who belong to a carving club, it’s a time for fellowship, talk and laughter. And endless cups of very weak coffee. (Caffeine jitters and sharp carving tools do not mix well.) It is a time for helping each other with a particularly troublesome part of a carving, a time of companionship and encouragement. Occasionally, carving can be a time of intense pain as a gouge or knife slips and slices off a treasured piece of anatomy.

Generally speaking however, it is very rare for carving to be a time of getting into trouble, and yet throughout my career it has become so on several occasions. My troubles with carving began at the ripe old age of eight when I first read ‘Paddle-To-The-Sea’, a book written in 1941 by a man with the strangely redundant name of Holling Clancy Holling. The book tells the story of a small wooden canoe carved by a young Indian boy in Northern Ontario and released to journey down through the Great Lakes and on out to the sea.

The book touched me somewhere and I fell in love with the idea of doing the same thing. Making a small wooden canoe, not paddling one out to sea. (From previous columns you may know how well canoes and I get along, so you have an idea how this is going to turn out.)

When I was growing up, my father was a Baptist minister, a career that has little need for tools of any sort. We owned a hammer with a cracked and taped handle, a large slotted screwdriver that was used exclusively for opening paint cans, and an extremely dull and rusty handsaw that nonetheless had such perfect pitch that I could play the first three cords of “Oh Canada” using the bow from my mother’s cherished violin. But it’s the screwdriver that’s important here.

For some reason we had a stack of old, moldy 2 x 4’s in the basement from which I planned to carve my very own ‘Paddle-To-The-Grand River’, that being the closest water course to our home in Kitchener.

After several hours of unsuccessfully hacking away at a board with the saw, I asked my older brother to stomp on it in order to snap it in half. That worked immensely better and I soon had the beginnings of my little canoe clamped into an old Emmert Patternmaker’s vise and was happily hacking away at it with the screwdriver, using the broken hammer as a mallet. Surprisingly, that didn’t work very well and I was soon on my way upstairs to liberate the meat tenderizer mallet and my mothers’ fabulously expensive and much prized paring knife, custom made specifically to fit her tiny hand. At least it certainly seemed that way considering all the trouble I got into for using it. It’s a good thing carving can be accomplished while standing up.

Now that I was well aware that kitchen tools were not to be used for woodworking purposes of any sort, I went in search of anything else that I could use. My father’s razor blades (Wilkinson Sword, of course) proved to be disappointingly inadequate for the task of woodcarving and by the look of his face the next morning, weren’t really up to shaving either. I maybe shouldn’t have returned them to his razor when I finished.

Eventually I discovered that my oldest brother, Jack, possessed a rather large knife (that would be ‘Jacks Knife’) that he was willing to lend me once he left the house one day without locking his bedroom door. I figured that he shouldn’t have left it just lying around in plain sight in his dresser drawer if he didn’t want me to use it.

Over the course of the next couple of weeks I diligently hacked away at my little carving, eventually coming up with a reasonable facsimile of what oddly enough appeared to be a Sherman tank. Clearly I needed lessons! I sadly and surreptitiously slipped the now dull and chipped knife back into my brother’s room and forever gave up all my hopes and dreams of ever becoming a carver or of sending a stupid little tank on its very own Blitzkrieg-To-The-Sea! (At least until 1967 and Canada’s Centennial).