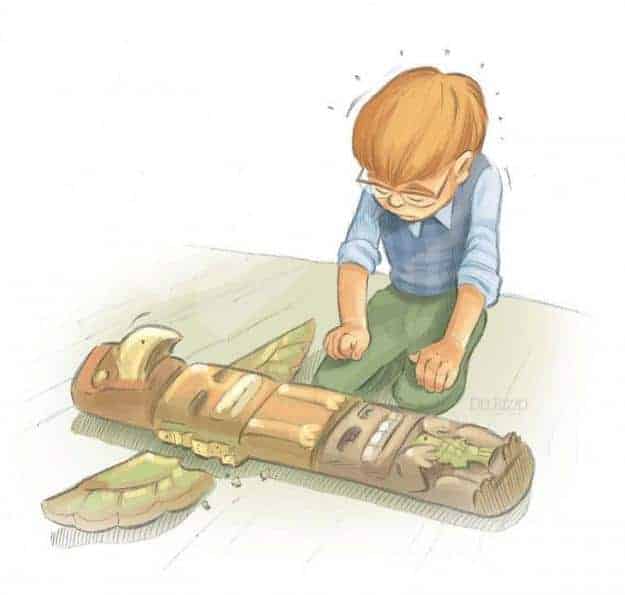 The year 1967 was one filled with many important events. The Six Day War began and ended appropriately enough― in six days. The Beatles released Eleanor Rigby and the Toronto Maple Leafs won the Stanley Cup for the last time. Ever!

Canada celebrated its 100th Birthday and I, a 13 year old Ontario kid, won the Canada-wide, Centennial Totem Pole carving contest. Actually, it may just have been the Ontario division that I won, possibly the York regional. Perhaps just the Aurora, Grade Six Boy’s Division. I don’t really remember. It was the 60s after all!

Why only boys in the sixth grade were eligible is still somewhat baffling but since I happened to be in that grade (again!) it proved to be very beneficial for me.

As mentioned in my last article, my total carving output to date was an aborted canoe / tank that I had attempted (and failed miserably) to carve when I was just a wee lad. But I figured that since canoes were an Indian invention as were totem poles, I had to be miles ahead in experience. Somehow!

We were given some left over logs from a skating party bonfire for our projects. After careful consideration I chose a log 4′ tall and about as large around as me. Roughly 6″ in diameter! Once I managed to carry it across the park and up three flights of stairs to the art room, I immediately started work on it. I didn’t even consider making plans. Who ever heard of using a design or plans when woodworking? Especially if you’re thirteen!
All winter I pounded and hacked away with a hammer and a set of four cheap chisels the school owned. Unfortunately, no one told me that carving tools needed to be sharpened. Or if they did, I wasn’t listening. Again!
Gradually, all of the other boys dropped out until I was the sole remaining carver in the school. At that point I figured I had a pretty good shot at Second ―or dare I dream?― even First place! Math wasn’t my strong suit.

Each day after class I rushed up the stairs and pounded and chopped away at that stupid pine log and drove the art teacher crazy. In the evenings I would visit the library to research carving techniques and totem designs and each day I would eagerly put to good use that which I had learned. (In spite of every teacher’s predictions, I could be taught). Gradually the carving neared completion and the only job remaining was to cut out the wings and then paint the thing.

A coping saw was purchased by the art department and I was given strict instructions not to break any blades because it was the only blade the school owned. Over the next four days I managed to cut out a set of wings without breaking a single blade, only to be informed that there was an entire extra set in the storeroom. Just in case!

Grade six was the year that tipped me over the top as far as school was concerned and I never fully trusted another teacher again. Thus our lives are formed and moulded (some say, twisted) by our school years and those who teach us.

I finally completed my totem pole and proudly placed it on the floor and raised it upright for the first time, only to watch as it slowly toppled sideways and snapped off the wings. This was to be my first lesson in leveling, a concept I had never previously needed to consider. I nailed a large board to the base so the pole would at least stand up, if not exactly straight, then re-attached the wings using ever bigger and better spikes.

Needless to say, my little totem pole won and I was presented with a certificate and prize from the Canadian Olympic Committee chairman during an extraordinary and highly prestigious ceremony that my entire family declined to attend. The prize turned out to be a soapstone carving of two Canada geese. Even as a kid I thought it odd to be given a carving considering I was receiving it for carving.

Thus at the ripe old age of 13, I graciously retired from carving with my championship intact. It wasn’t until I was 27, married and had a child, that I came out of retirement to once again take up the knife and chisel and reclaim my glory.

And I have never looked back!