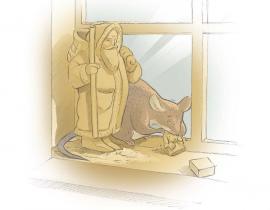 The year is finally wrapping up and with it ends the seemingly unending saga of my woodcarving. Since this is the Christmas issue I thought it appropriate to write a Christmas carving tale.

The year is finally wrapping up and with it ends the seemingly unending saga of my woodcarving. Since this is the Christmas issue I thought it appropriate to write a Christmas carving tale. And no, I will make absolutely no reference or sad pun about carving the Christmas goose. Although I probably could if asked nicely. Anyone? No?

Okay then, the truth be told, the sad end to my carving career nearly came about late one Christmas Eve. At the stroke of midnight I was visited by a spirit, likely the scotch, who foretold the coming of the ghosts of carvers past and present. I shakily enquired as to what happened to the third one but alas, I was informed that there would only be two ghosts as I clearly had no future as a carver.

That Christmas I had decided to surprise my wife with a carving of an Olde-Tyme Father Christmas. Don’t ask how I knew she wanted one because it’s still a mystery to me. Although, the previous June I had begun to find magazine pictures of old Santas pasted to various surfaces of the house, the shop, inside the car and even one scotch-taped to my forehead one morning. It all helped to clue me in. You don’t have to beat me over the head to get my attention.

As Christmas crept closer I remembered those photos. I began by carving an intricate staff for the old beggar to lean on and I started to carve a woven wicker basket for his back to eventually hold hand-carved teddy bears and other presents. I carved a large pocket in his cloak to fit a cute little puppy that would snuggle deep inside. I began so many extra little carvings that I nearly ran out of December before I even started on the Father Christmas.

Christmas Eve arrived early that year so I packed the unfinished staff in one little box and the partially completed presents for his pack in another. The roughed-out puppy was dropped into a little ring box with a ribbon and the figure was placed in a box all by himself. That way it looked like she was getting far more than she really was and I would look better.

Christmas morning came and Kelly and the kids leapt from bed at the stroke of about 9:30-ish! They do love their sleep! Kelly shoved the kids aside in the excitement to reach her presents first. The boy careened off the couch leg while our Number One daughter deeked around the dining table trying an end-run to the tree. Our emergency-backup-daughter, being small, was able to sneak her way across the room using the dog as cover.

Shreds of gaily coloured wrapping paper flew and bright curly ribbons fluttered through the air as presents were viciously torn open and just as quickly discarded in the search for the next treasure. Kelly hefted the box containing the figure and as she started to unwrap it I began my apologies. I tried to explain that I had run out of time because I was trying to make it the best Father Christmas ever, just for her. As I handed her the other packages containing the staff and the puppy and other accoutrements I told her I could complete the carving now that I had the time.

Eleven years later and the carving still sits in my shop, covered in sawdust. The pocket for the puppy lies empty, the dog long lost. The staff still looks like a piece of dowel and the presents are mere blocks of scrap pine somewhere.

So please, let my story be a lesson to all you spouses. Cut out the photos in April!