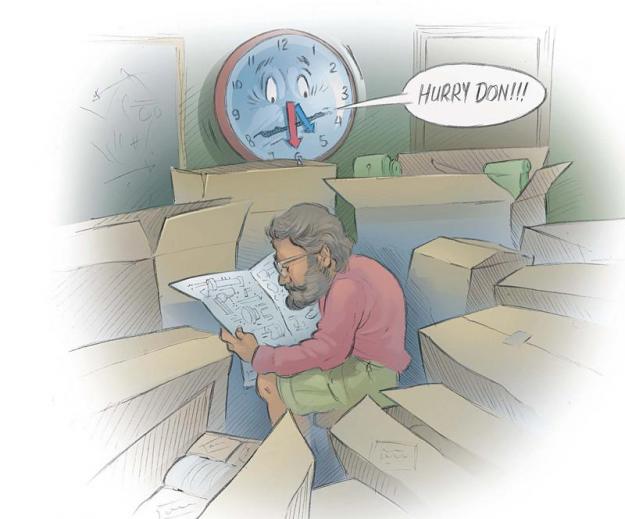 Those who can, do; those who can’t, teach. The rest become politicians.
—George Bernard Shaw (with apologies.)

Teaching is an honoured profession, I have oft been told. Usually by a teacher. But even as a child I realized what a bunch of hokum that was. What other profession lets you work from nine till three and then gives you four months off every year? And then not only pays ridic­ulously well but also supplies a really decent pension at the end of your useful­ness? (Other than politics, of course.) After careful thought and contemplation, I came to the obvious conclusion: There is clearly nothing honourable about teaching.

Which of course is precisely why I decided to become a teacher. So I trun­dled off and got my teaching papers from Oxford College (that’s in England) and went happily off to Prague to teach the little Prawns how to speak English. That did not end well.

After that fiasco, I decided I should probably concentrate on teaching people something that I actually knew a little about. But I couldn’t think of anything! Eventually I remembered that I was once a somewhat competent woodworker and a decently competent wood-turner. Maybe I could teach something along those lines. Since I already owned a really nice lathe, that seemed the logical area to concentrate on.

An advertisement in the paper soon had the phone ringing off the hook and to my immense surprise I was able to fill my calendar for months in advance with people anxious to sit at my feet while I regaled them with my immense knowledge and wisdom. Or we were in the depths of a Yukon winter and a larger number of people than normal were going out of their minds with boredom. From the response, it was clear that I would need some more lathes. I phoned my supplier in Calgary and ordered another four lathes, complete with gouges, scrapers, chucks and other assorted paraphernalia, and hoped it would all arrive before the first class was to start.

While awaiting delivery, I erected dividers between the workstations, built fancy tool racks and shelves to hold the nifty new toys and strung vacuum lines everywhere. I was still anxiously await­ing the delivery of my equipment as the day of the first class arrived. Finally, at four o’clock a large truck backed up to the loading bay and began unload­ing dozens of boxes and cartons and crates of all shapes and sizes onto the ground and then quickly disappeared into the deepening gloom. I collapsed on a crate and dejectedly stared at all the pieces and also wanted to disappear into the gloom. There was no way I could unpack all this crap and assemble four lathes before the students arrived.

Nevertheless, I fetched my tools and tore open boxes, broke open crates and smashed, mashed and crushed fingers with abandon. I gathered all the various bits and pieces together into one huge mound and began assembly. Within an hour I had assembled what appeared to be the launching rails of a small nuclear device. I assumed something wasn’t quite right and resorted to that last defence known to men the world over – the instructions – but even though the four lathes were supposedly identical, each one came with a different manual. After carefully reviewing the hieroglyph­ics, I was finally able to discover where I had gone wrong. I had clearly ordered the lathes from the wrong company!

Eventually I managed to get every­thing more or less correctly assembled and gratefully collapsed, ready for a well-earned coffee and a smoke. It was too bad that I didn’t smoke because I really needed one by that time.

Too soon my students arrived and excitedly gathered around the lathes, gazing up at me in enthusiastic antici­pation, ever so eager to acquire the fine art of woodturning. I gazed out at their vapid little faces, completely dumb­struck, as I realized I didn’t have any clue whatsoever of what to say. Huh! Maybe teachers really do need to do lesson prep work after all.