Home Techniques and Tips Wood Chuckle Jerry Has An Idea

Jerry Has An Idea 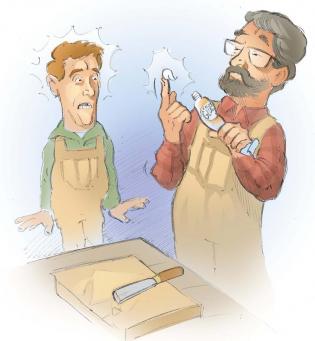 Jerry had an obsessive-compulsive personality. In behavioural psychology circles he would be termed “loony as a fruit bat.”

To me, he was just another customer of my ‘do-it-yourself’ woodworking shop.

Who was I to judge the mental instability of cash paying clients? I had my own problems. As long as they didn’t sever any body parts they might wish to use in later life, what did I care? My function as the owner covered instruction, assistance and raking in the cash. I was not an operating-room nurse.

Jerry’s dream emanated from an old movie set in England. There was a 20 second scene that took place in someone’s study where Jerry spotted something that had triggered a long hidden desire he didn’t know he had.

From that moment on, Jerry was going to dedicate his life to the creation of hand carved linen-fold panels. For those of you not familiar with them, linen-fold panels are simply boards that have been carved to look like hanging drapes. Go into your living-room and take a look. (Be honest now, this is the first time you even knew you had drapes, isn’t it?) Note the way the drapes rise and fall across the bottom, almost like waves? Well, that’s what a linen-fold panel is supposed to look like if carved properly. Simple, if you know what you are doing! Not so simple if you can’t tell the difference between a #3 spoon gouge and a sharpened, slotted screwdriver. Or your wife’s great-grandmother’s, cherished ivory handled, antique paring knife. In my defence, I only used it the one time. Mainly because it didn’t work well at all.

Jerry of course, had no idea how to carve anything but a roast chicken. Not only that, but he had very little spatial differential skills and no matter how many sketches I made for him to follow, he still couldn’t get the hang of turning a drawing into three dimensional reality.

After weeks of failing miserably, I decided to take pity on the man and give him a hands-on lesson of the art of linen-fold carving. Truth be known, it wasn’t pity at all, I was afraid he’d get discouraged and I’d no longer have the income from his shop rental fees. I picked up a nice straight-grained piece of basswood and quickly sketched the outline of a linen-fold onto it. I glanced over at Jerry. He was still with me. Picking up a gouge to check the edge for sharpness I nicked my finger. As I licked the drop of blood off my finger I noticed Jerry swaying woozily. I was well aware that a minor gash like that would simply need a few stitches at most. I grabbed the tube of Crazy-Glue and squirted a few drops into the wound and pressed the edges together. It would hold until I could find time to go to the hospital. Right now, I had better things to do.

Within a few minutes I had a reasonable facsimile of a linen-fold panel carved into the board and Jerry had a reasonable facsimile of understanding on his face. The light had ‘Don’ed,’ so to speak. I left Jerry gleefully carving away while I took my increasingly light-headed self off to the hospital. The ambulance people claim I use up too much of their fuel budget and refuse to come for me anymore. Jerry has continued carving linen-fold panels and has gotten so good at it that he was eventually able to go into business selling them to other like-minded people (four at last count) who also watch late-night English television.

The doctor added another six stitches to the previous score of 738 (my wife and I had added them up one night when we were bored) and with a sigh told me, yet again, to be more careful from now on.