Learning to Woodwork – Practicing on the Lathe 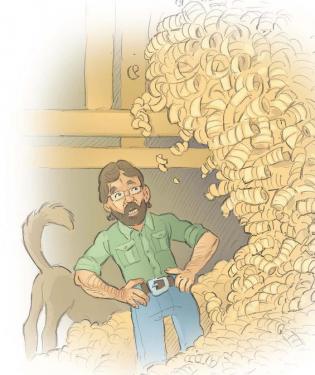 Another couple months have gone by and I still haven’t told you how I became the Yukon’s Number One turner extraordinaire.

Well, sit down and pre­pare to be dazzled. My all-time top secret is: Practice! Thank you! Thank you very much! (I’m imagining a multi­tude of clapping and cheers. Maybe that should be “jeers”.)

After many hours of standing around staring at that great hulking beast sitting in the shop (my lathe, for those of you not paying attention), I discovered the hard, and at times painful fact that all you need to do to become a good turner is practice, practice and then continue practicing.

Knowing myself as well as I do, I quickly realized that maybe I shouldn’t set out to turn the world’s greatest bowl or candlestick. At least not right that minute. That would surely lead to dis­couragement and probably pain when the piece of wood – or the entire lathe – inevitably failed me. Failure of equip­ment tends to irk me. This often makes me upset, which leads to bad words being spoken. And oft-times the possibil­ity of tools being tossed – some of which have never been found again.

I knew that I just needed to spend some quality time turning large pieces of wood into larger piles of shavings. Lots and lots of quality time. Now all I had to do was figure out how to do it. My plan was to simply experiment with the lathe and hopefully figure out what the barbeque tool look-alikes were actually used for. To be honest, I still have a few that I’ve never used, simply because they don’t seem to have any other purpose than to round out the number in a set to eight.

Experimentation, unfortunately, has always played a huge role in almost everything I’ve done in my life, including hang gliding, driving a car, motorcycle riding and the discovery of the effect a hammer has upon a rifle bullet when placed on a cement step. My brother actually learned more from that last one than I did. (We call him “Three-fingers Dave” now.)

Compared to those experiences, I fig­ured lathing would be a piece of cake. I spent a few fascinating hours figur­ing out how to minimize the number of times something would fly off and bonk me on the head. Once that was safely accomplished, the many bumps and bruises, kissed all better by my loving wife, and the numerous cuts and scrapes bandaged, I set out to make shavings. Great heaps and mounds of shavings. So many shavings that by the time spring eventually arrived in late May, the entire back half of the shop was piled to the rafters, I had lost at least one dog and possibly a kid buried deep within.

But I persevered, and by then I was thoroughly familiarized with my tools. The big honking U-shaped thingy could strip the bark and shavings off a length of firewood faster than the eye could follow. I had great fun learning how to direct the streams of shavings reaming off the lathe in almost any direction I wanted. To the left. To the right. Straight up, ahead and even back over my shoul­der. Yes, either shoulder! I could hit anyone I wanted to, as long as they were somewhere in the shop. It was great fun. Too bad there wasn’t a practical purpose to my skills.

It was at this point I decided it was time to actually make something. Unfortunately, this was the Yukon and decent wood was hard to find. I had to venture forth and discover new, pre­viously untapped treasures in which to bestow my immense talents. Since the local lumberyards had yet to dis­cover anything made of wood, other than spruce two-by-fours, I gathered my chainsaw and headed into the vast wilderness surrounding Whitehorse, where I found a veritable treasure trove of wood­working delight.