Oh, To Build A Canoe 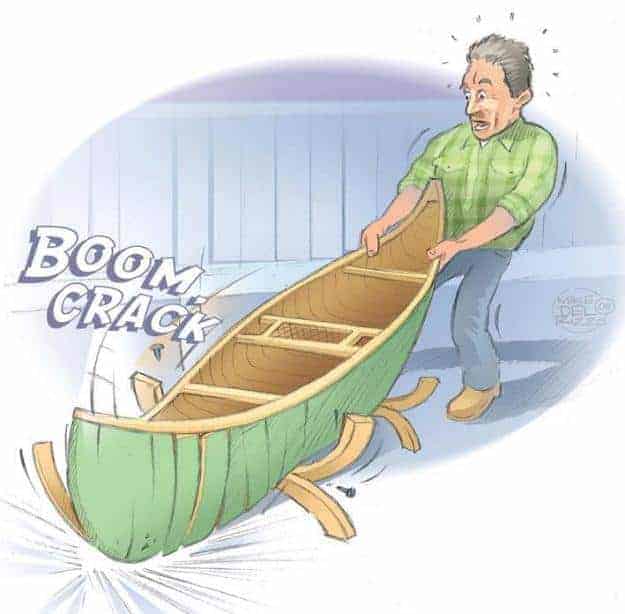 In my last column I wrote about wooden inventions, specifically that greatest of Canadian inventions, the canoe.

For many years I wanted to build a cedar strip canoe; primarily because they were inexpensive to build, and (for several months) my shop was too cold for customers to use. Plus, I needed a project that would keep me moving around enough that I wouldn’t freeze to death.

It had always been my eight-year-old son’s dream to build a canoe – ever since I first told him that he wanted to. Since the shop was empty, we decided to build one. And, even though I had never done it before, I was fairly certain that he hadn’t either. A trip to the local bookstore was in order since it was warm and closer than the library, which I was no longer allowed to use, but that’s a whole other story.

We browsed the racks until we were warm and eventually located the ideal book for our project: “The Ideal Book of How to Build a Cedar Strip Canoe in Three Days or Less Without Even Trying or Knowing What You’re Doing”, or something like that. I bought it with the boy’s allowance. The book had several plans and we finally agreed on the one I liked. We drew the plans onto ¾” plywood and cut out the forms to which cedar strips would be fastened. The forms were numbered and fastened to the strongback, creating what appeared to be a skeleton of a canoe, albeit a deformed and severely warped one. We checked and checked again. The two center forms were much too small, causing the sides to dip inwards as if the canoe was wearing a corset.

Something was clearly wrong with the plans. Now, I know that every woodworker is saying to themselves, “Yeah right, it was the plans that were wrong!” I also realize that every woodworker out there has used the exact same excuse when they screwed something up, but in this case, it was true! We decided to guesstimate the correct sizes and eventually came up with something that looked a lot better than what we began with.

Weeks passed into months and every day after school the boy would trudge the many blocks to the shop. Blizzards, snow squalls, freezing rain, nothing could stop him from the joys of working alongside his dear father. I never once worked on the canoe without him. This was a father/son project and I wanted it to be as special for me as it was for him.

Eventually, every cedar strip was fastened neatly in its place and carefully hand sanded to a flawless, 1600 grit finish. The sides were perfectly faired and all that was left to do was apply the fibreglass cloth, which we planned to do the following day. The boy would come over after school and I would shut the shop so we wouldn’t be disturbed more than we already were. Early the next day as I was getting everything ready for the big moment, a truck pulled up with some lumber I had ordered. Unfortunately, the canoe needed to be moved from in front of the loading bay.

With great care I lifted the front of the canoe stand, and very cautiously swung it to the side. I walked to the rear of the boat and, oh-so-gently lifted it and swung it around. As I carefully moved it around, the front legs on the stand collapsed and the precise point of the bow dropped four feet to the concrete floor. Without the fibreglass to hold it together, the hundreds of individual pieces of lovingly shaped, hand-fitted and sanded cedar strips shattered and splayed apart like the petals of some gigantic alien flower. I thought of the hundreds of hours the boy had joyously spent on that boat and I was heartsick. I phoned his school to tell him not to come over. I simply couldn’t bear to see the look on his sad little face. I’d rather let his mother deal with it.

The remnants of our glorious canoe served us nobly as kindling for the rest of that winter. We never attempted to build another one. We bought some lovely polyurethane kayaks instead.