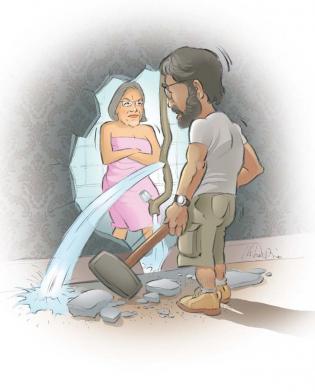 Renovate /rénna vayt/ vt 1 To destroy part or all of one’s home in an attempt (usually failed) to improve said dwelling. 2 A bad idea usually perpetrated and/or instigated by one’s spouse.

Renovate /rénna vayt/ vt 1 To destroy part or all of one’s home in an attempt (usually failed) to improve said dwelling. 2 A bad idea usually perpetrated and/or instigated by one’s spouse.

Over the years, I have come to one inescapable conclusion: it is virtually impossible for the North American family to move into a new home without immediately discovering that it doesn’t meet the exacting criteria of the other spouse. This is in spite of the fact that they had just spent countless days, weeks and months searching through thousands of possibilities until finally discovering the most perfect little dream house they have ever seen or even imagined.

Over the years of my somewhat varied career, I have built homes to live in and I have purchased homes to live in. I’ve rented houses and I’ve rented apartments, both above ground and below. I once lived in a lovely apartment just a five-minute walk from the castle above Prague.

I even purchased a wall tent in which my wife, infant daughter and two dogs lived beside a frozen mountain stream one Yukon winter. The one thing they all had in common though — well, other than a toilet, the wall tent even had one of those; after all, roughing it only goes so far — was that not one of my dwellings ever escaped renovations of some sort, whether they were really necessary or not. More frequently not.

As I have mentioned in previous columns, my wife and I recently moved to B.C.’s sunny Okanagan Valley. We rented a motel room for a few months as we searched through towns and villages, viewed house after house after house and explored more than a few of the wineries dotting the countryside. (Tip: do not make any major house purchasing decisions following a visit to a winery. Or two. Or three) But eventually we bought a house. It was a pleasant little place that we felt we could make our very own without actually having to do anything to it except sign over our firstborn (which we were perfectly willing to do.) A house that was large enough for the children to come visit but small enough that they couldn’t stay. A house with a spare bedroom that I could use as a study so we wouldn’t have a spare bedroom for above-mentioned children and a garage to set up my tools in, for much the same reason. A house that was absolutely perfect for our every need, in which we could simply pull our stuff (oh so much stuff) out of storage and move into immediately, then wander on down to the beach or go visit another winery. In short, a house that needed absolutely no renovations whatsoever.

Three months and counting and we are still renovating.

As the weeks passed and we hung pictures on walls that we suddenly realized badly needed painting and squeezed furniture into rooms that had mysteriously shrunk by half, we realized our perfect little house wasn’t quite so perfect after all. Renovations would be needed. Major renovations, in fact. Renovations that entailed walling up doorways, smashing very large holes in other walls to make new doorways, plumbing that had to be disconnected away from 220-volt dryer hook-ups. And dry-walling. So very much dry walling! I really hate dry walling!

Plus the house was pink. How’d we miss that? Oh yeah: wineries.

The first renovation project my loving wife came up with was to replace the hideous pink carpet in the master/mistress bedroom with laminate flooring. Luckily, the August/September issue of Canadian Woodworking & Home Improvement has an excellent article about installing a floating laminate floor.

I received my copy just in time to read about all the mistakes I had made installing my floor two days prior.

To Be Continued (probably for years)