Home Techniques and Tips Wood Chuckle Smokin' In the Woodshop

Smokin’ In the Woodshop 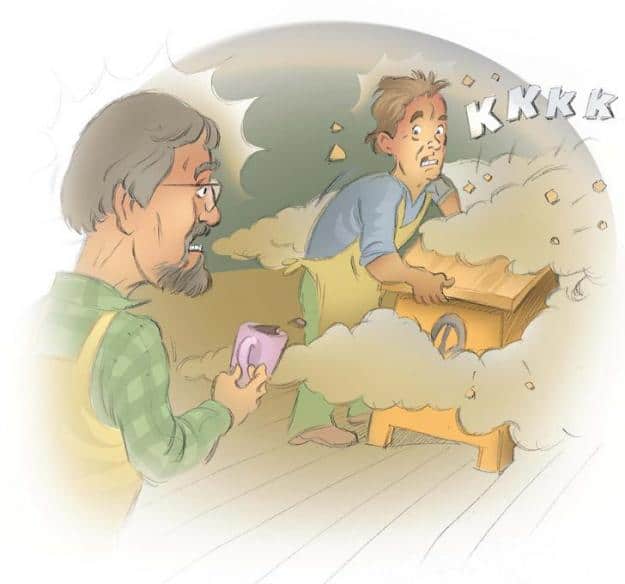 Every once in a while you come across someone who takes their enthusiasm to the extreme, no matter how incompetent they may be.

As I have mentioned in previous articles, I once owned a ‘do-it-yourself-with-a-lot-of help-from-me’ woodworking shop in the far north. That doesn’t mean north of Barrie, for you Ontarians – I’m talking about the Yukon here.

Often, the people who used my shop were rank amateurs (read ‘clueless’) when it comes to woodworking, but most were well aware of their shortcomings. Some however, were either completely unaware of their ineptitude, or knew it, but thought that maybe I would never catch on. This type of attitude can be harmful in a woodworking shop. When working around rapidly spinning steel knives and blades that are hell-bent on maiming or dismembering you, it is oft-times best to know what you are doing. At least a little bit!

One week a young man came into the shop for a look around. He eventually let it slip out that he wanted to make a set of bookshelves or a dresser, that he wanted to use either pine or oak, maybe mahogany, and that he wanted it to be either three feet high and six feet wide or eight feet high and three feet wide. This lad clearly hadn’t a clue. But he certainly was enthusiastic. He claimed that although he hadn’t done any woodworking since high school, he had built an entire dining-room suite for his mom, complete with a dresser type thingy and a neat table that sort of pulled out and either three or eight chairs depending on how hard he thought about it. He got the best mark in the class, too!

The following Saturday he arrived at the shop with a stack of lumber. It was birch! He had decided to build the bookshelf but didn’t have any plans. I helped figure things out while he began preparing the wood. He first wanted to rip the wood into four inch strips and then glue it all back together again as his shop teacher had taught him, long ago. I carefully explained that kind of thinking had gone out of favour decades ago and was a complete waste of time. Why take flawless, 12 inch wide boards and cut them down just to glue them back into 12 inch boards that now had ugly joints down the length of them? I had a heck of a time convincing him that if you’re a good enough woodworker, there is no need for such foolishness. He was skeptical, but finally agreed with me.

As the day passed, he got better and more confident until I could leave him alone for up to minutes at a time without worrying about what bone-headed stunt he would pull next. By the afternoon he was ready to start dadoing the sides, and after assuring me that he knew what he was doing, I left him alone and went to help another client.

I heard the table saw start up and after listening for a scream and hearing nothing, I assumed all was going well. I finished with my other client and sat down for a well-deserved coffee and a smoke. After my smoke was done I carried my coffee cup to the shop and opened the door to a blinding, acrid pall of billowing smoke. From the depths of the roiling clouds I could hear the saw whining at such an ear-piercing pitch that I thought the coffee mug would shatter in my hand.

I yelled at him to shut the saw off and eventually the nerve grating screech died out. Feeling my way through the smoke, I finally got to the saw and tried to figure out what the problem was. I soon discovered that he had installed the Dado blade set backwards. I quietly pointed this out to him and showed him the brilliant red glow of my now ruined, four hundred dollar dado set. “I thought there might be something wrong,” he said.

After bringing into question his parentage, I calmly asked him to leave the shop and not return. He decided he no longer wanted his shelves after all and left the shop in a great hurry. I never saw him again.

A year or two afterwards I found his material while cleaning the shop. I finished the shelves myself and have put them to good use for these past 12 years with nary a warp, twist or cup. I figure they were partial payment for my ruined blades.