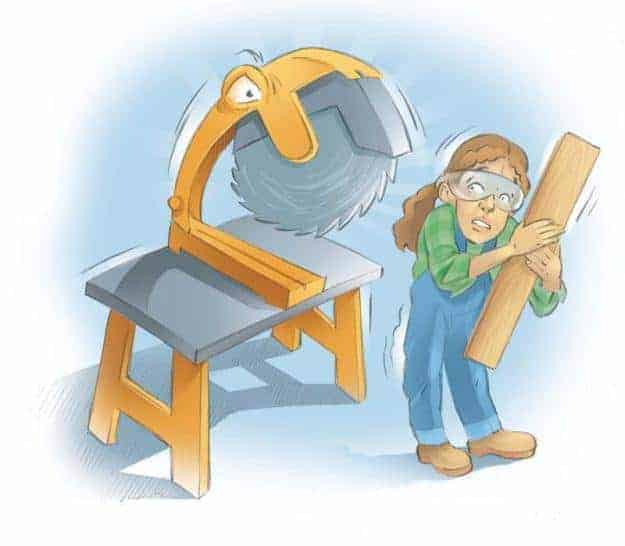 I recently received a letter from one of my many fans. No, it wasn’t from my wife or my Mom … this time.

I recently received a letter from one of my many fans. No, it wasn’t from my wife or my Mom … this time. It was from a brand new fan and she was complaining about something I had written, or rather, not written in my column. Luckily, this was the first letter I have ever received that actually complained about Woodchuckle. Truth be told, it’s the first letter I have ever received … period.

Her complaint was that I either never wrote about women in the woodworking field or if I did, it was a simple peripheral reference to either my wife, my daughter or my emergency-backup-daughter, never about actual women who do woodworking. There’s a very valid (well I think it’s valid) reason for that, I replied. I don’t know any! But it turns out I was wrong (again); according to my wife (and daughter, and emergency- back-up daughter), I do know some woodworking women. In fact, over the years I have either taught or attempted to teach several women various aspects of woodworking. Some with disastrous results, some with hilarious results and some with exceptional results. Just like with men!

For those who aren’t regular readers of Woodchuckle, my shop in Whitehorse was geared for the do-it-yourselfer. Real people, men and women, would, for a nominal fee, use my shop, my expertise and my equipment build to varying degrees of success, whatever they wanted.

On several weekends, I held a course specifically for women called, appropriately enough: “Woodworking For Women.” I thought this was rather a clever title. I thought of it myself.

In the very first course was a woman I’ll call Wendy, because that’s her name and her husband is used to calling her that. Wendy wanted to build something, who knows what, and she was very keen to learn how. Like most people who take courses, Wendy didn’t know much about woodworking but she was enthusiastic. Her problem was that she was deathly afraid of the sliding compound saw.

The table-saw, a tool specifically designed to turn people into giant shish-kebabs, didn’t faze her in the slightest. She’d fire that puppy up and blithely and with great aplomb, rip, dado and rabbet a piece of maple or oak without a worry or care. The eight-inch jointer was operated by her with no more concern than plugging in the kettle and the shaper, a tool that still scares the bejeebers out of me, churned out raised panel doors as if its sole goal was to please her. But the chop saw – that was a different kettle of fish altogether. Wendy would very carefully place her board on the saw bed, very carefully align the blade to her carefully measured and carefully (Wendy was a little pedantic) drawn pencil mark, take a deep (and careful) breath and slowly squeeze the trigger. The saw, like all chop saws, has a very high torque on start-up and the saw would kick a little in her hand. Wendy would squeak out a high-pitched yelp and jump halfway across the shop in horror. Every! Single! Time! Once the saw wound to a halt, she would slowly advance on it and go through the entire process again. With the exact same results. After watching this a few times I’d take pity and do the cut for her. I always gave her the option but not once did she ever manage to make a cut with the chop saw. Twelve years later and she’s still in therapy, I understand.

On the other end of the scale, I had another woman using the shop who came in with zero woodworking skills but wanted to build a four-poster-bed. And did! The problem I had with her is that she built it almost as fast as I could have. (Not as good though.) Roshean was a natural. I’d only have to demo a tool or technique once and she’d shove and kick her skinny little self to the front of the line to be the first to try it. And she’d perform flawlessly, first time. It got really irritating! A student isn’t supposed to equal the master first time. She was either very good or I was an incredible teacher. And we all know the answer to that!

I know this article was intended to be a tribute and apology to woodworking women, but it doesn’t seem to have worked out that way. But at least I mentioned you.