Once you decide to try your hand at some finer woodworking, you soon realize the need for a jointer and thickness planer. I have already discussed buying tips for 6″ jointers (Canadian Woodworking, Feb/Mar’06, issue #40), so in this issue we will look at what you need to know when you are looking for a benchtop planer. 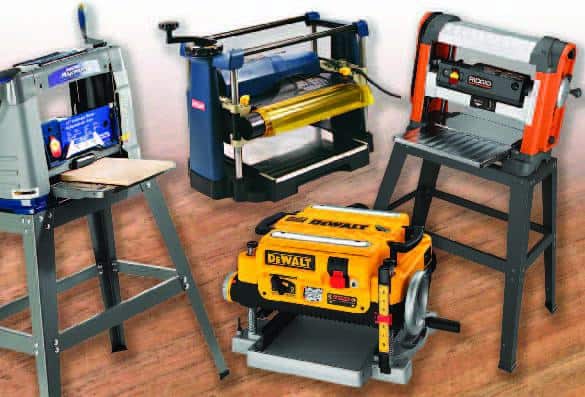 You’ll find benchtop planers that range from about 12″ to 13″ in width. You might consider a wider model if you make a lot of solid wood panels, such as small table tops, shelves or door panels. Narrower models are still great for milling all kinds of miscellaneous parts, such as table legs, aprons, drawer parts, and so on.

Most benchtop planers cut up to 6″ in thickness, even though you don’t often need such thickness. However, keep in mind that planers are designed to mill edges after your jointer has made one edge perfectly flat. So, while the maximum height is not used often, it does come in handy on occasion.

It’s common, in planer tool reviews, to state the maximum amount of material a planer can cut off in a single pass. Such measurements mean very little to me. A planer that can cut ⅛” off pine might not handle that depth in purpleheart. The denser the wood, the lighter the cut you’ll need to take. Even if the machine has the power to remove ⅛” in one pass, I never do it. The deeper the cut, the worse the tear-out. Even the most straight-grained lumber is bound to have a few areas of swirling grain, particularly around pine knots. So my advice is to ignore manufacturers’ claims on maximum cut. You’ll rarely need it. Running a benchtop planer at maximum cut for more than a few minutes is going to kill the motor anyway, as these machines use relatively small universal motors.

A certain amount of support is needed for accurate planing, so most machines come with infeed and outfeed tables to support the boards on both sides of the planer. Roller stands should also be used when milling large, heavy boards. Look for extension tables that not only angle up and down at their ends, but that can also be adjusted level with the main table where they connect to the machine. Some extension tables aren’t level, and boards get caught going into or out of the planer.

Some machines have stops that you can set for a specific board thickness (ie. ¾”). If you have a powerful dust collector, you may find these stops helpful. Without dust collection, I find these stops to be unreliable. They are usually designed so that a piece of metal (on the upper half of the machine) contacts the head of an adjustable bolt (inside the base of the machine).

Unfortunately, during heavy planing jobs, wood shavings often clog the inside of the machine. With such debris between the mating parts of the depth stop, it will not be accurate. Instead, learn to calibrate the scale on the machine, and measure your stock carefully – with dial calipers if necessary.

Snipe can be caused by the head of the planer bouncing up and down due to the cutting forces (particularly near the ends of a board). This causes the cutting depth to change, leaving marks on your wood. Anti-snipe locks prevent the machine’s head from moving during a cut. A more common type of snipe is caused by the wood coming out from under the infeed roller near the end of a board, causing the back end to rise up and hit the cutterhead a little deeper. No anti-snipe mechanism I’ve seen prevents this, even on larger stationary planers.

Still, anti-snipe locks may help on some of the lighter benchtop models, especially when milling heavy boards. It is worth having if you are comparing similar planers where this feature is the only difference. Some models such as DeWalt’s DW735 have anti-snipe features already built into the mechanics of the machine, without requiring you to even turn a knob or pull down a lever.

Jointers and planers are notorious for difficult knife changes. My stationary planer’s blade changes aren’t so difficult as they are tedious and time-consuming. Most benchtop planers aren’t much different. Even with the knife-setting gauge that often comes with the machine, it is slow work. Some benchtop models now have quick knife-setting systems, requiring nothing more than dropping the knife into place. These systems have been made possible by the invention of disposable knives that are exactly the same width from tip to back. These knives are often double-sided, so that you can simply flip them around for a second use. I highly recommend these quick knife-setting systems, as they make blade changing quite easy.

While most stationary thickness planers have a three-knife cutterhead, most benchtop models have just two knives. I don’t consider this to be a big problem because the two-knife models tend to run at higher rpms than three-knife stationary models. This partially explains why these portable models are so loud (universal motors are much louder than induction motors). Still, a three-knife cutterhead on a portable planer is useful in the sense that you don’t wear the knives as quickly. Three knives do the same work as two, so you spread out the wear a little more. Also, if a three knife model happens to run at similar rpms to a two-knife model, then you’ll get even more cuts per inch at any given feed rate. The smoother the surface, the better.

For me, having a slow and fast feed rate control on any planer is essential. Put more accurately, a slow feed speed is a must. I use the faster speed on my stationary machine only on rare occasions. The faster you run boards through a planer, the worse the tear-out where there are grain reversals.

For the kind of work I do, having a slower feed speed available is pararmount.

The only time I use the faster speed is if a board has to go through the planer six times. Then I’ll use the fast speed for the first few passes, finishing off with the slower speed, for the best possible surface and little or no tear-out.

I would have nothing against a single speed planer if that speed happened to be slow, but that is not the case. Manufacturers of single speed planers design them to be job-site machines for the building trades. Sacrificing quality of surface for working speed is desirable in such lines of work. After all, if you’re painting wood, then deep tear-out can be filled with wood filler or drywall compound before painting. For fine furniture projects with clear finishes, there is nothing better than a slow feed rate. For that reason, any two-speed planer gets my vote every time.

Thickness planers are among the safest larger tools in a woodworking shop. Unlike the jointer, the cutterhead is inside the machine, so your only risk of getting cut is when changing the knives. On the other hand, planers throw out a lot of shavings in a short period of time, and are very loud, so wear hearing protection, safety glasses and a dust mask.

Unfortunately, the grain is so wild on some boards that you get tear out no matter which end you plane from. The best approach in such cases is to take very light cuts (1/32″ or less), and select the slowest feed rate if your planer has two feed rates. You can also try lightly dampening the board with water before running it through the planer.

If you’ve used a planer before, then you know what snipe is. It’s that nasty gouge that often occurs at the beginning, or end of boards, as they enter, or exit, the planer. While many new planers employ a cutterhead locking mechanism, this doesn’t always eliminate snipe. You can cut your stock a few inches longer on each end, and then trim them to final length after planing. Or, you can feed a spare board the same thickness as your stock right in front of your first board, daisy chain feeding all your stock, and follow up with another spare board at the very end of your last piece of stock. The trick is to keep feeding those boards butt to butt. That way, any snipe will occur on the spare boards.

Although planers are among the safest machines in the workshop, exercise caution and follow these helpful safety tips. 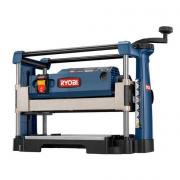 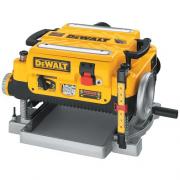 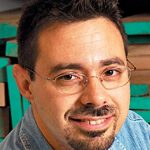