Benchtop and free-standing combination belt/disc sanders are among the most popular sanding machines in woodworking shops. They’re super convenient for sanding concave and convex shapes as well as fairly short flat surfaces. 2Sand makes a wide range of sanding belts from 24-grit to 400-grit. I’ve been using the 150-grit belts in my shop for the past month or so.

The belts have a heavy X-weight cloth backing accompanied by a resin over resin bonding, making them stronger, stiffer and more resistant to heat and moisture than the economy J-weight belts. These X-weight belts are better suited for general purpose sanding where a long service life and sanding consistency are important.

A nice feature of the 2Sand belts is that they can be run in either direction. By periodically changing the direction in which they’re installed (and consistently using a belt cleaner) I find they last longer. Overall, the 2Sand belts outlast the Klingspor belts that have been my mainstay for the past decade or so. On hardwoods, which I primarily use, they cut very quickly and don’t load as quickly.

The 2Sand brand cost about $3 more per belt than the Klingspor brand, but given the longer service life, I think they’re better value. 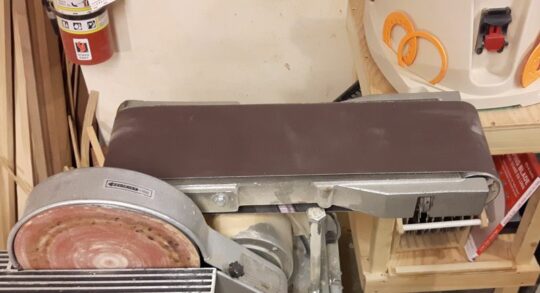