These days, when it comes to selecting an impact driver there’s a long list of options to consider. I’ve taken a look at five impact driver kits, comparing the similari­ties and differences of the impact driver in each kit, plus torturing them a little bit to see how well they performed on some of the toughest fastening applications I could find. Why did I include just kits, even though I only tested the impact driver in each kit? Good question. Though most of these impact drivers can be purchased separately, the value is so high when buying impact drivers in a kit we assumed the majority of readers would likely opt for that approach. In most cases it’s an extra 20% or so to get a drill or another power tool in a kit, and sometimes another battery is also included. Kits offer serious value.

Before getting into the five products we selected for this article I want to mention the impact drivers we left off the list. With such a wide range of impact drivers on the market we couldn’t possibly include every option you’ll find on the shelves of your local dealer. Some of you are already familiar with the serious benefits impact drivers bring to the shop and worksite, but for those of you who aren’t up to speed on what sort of “impact” these tools can make, we decided staying under the $200 ceiling was a good place to start. For some readers, spending an extra $50 or so might make more sense, but for others, a more basic tool will pretty much meet all of their needs.

The main function of an impact drive is to drive medium and large metal fasteners like screws, lag bolts and many others. Having said that, I wanted to push these drivers past their com­fort zone to see how they fared. It wasn’t all about how much torque they had. Other factors such as how they feel in the hand, how balanced they are, what type of chuck they have, how large they are, and on-board lighting are also important.

One job I occasionally use an impact for is to take anchors out of concrete. Usually these 3/8″ anchor bolts rust in place after a few years in concrete. In the past I haven’t found an impact driver compact enough (such as the ones here) to take these out. The other tough job I run into is driving self-tapping screws through plywood into a steel beam. This job is tough because once the screw is through the plywood, the impact driver has to keep enough torque and RPM to then drill through the steel, while having all the friction of the plywood on the screw threads. These screws are a lot harder to drive than a typical screw into just wood. All the impacts I tested were able to drive the self-tapping screws just fine, and I was actually surprised to find an impact that could pull these anchors out of concrete. 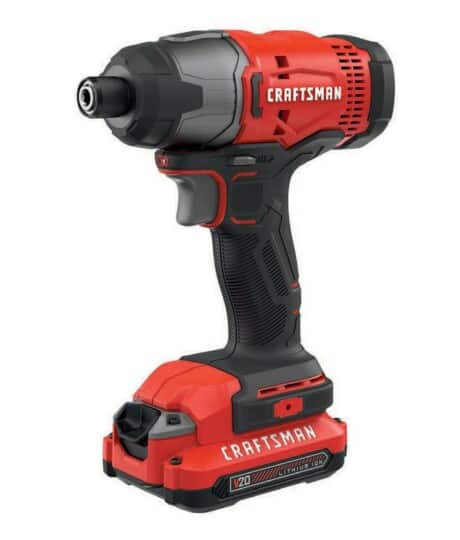 The Craftsman impact was well balanced over all. One thing I liked about it was that you could push a driver bit into the chuck with one hand and have it lock in place. With some impacts, you have to push or pull a release collar to get the bit into the chuck. I find it slightly tricky to hold the drill with one hand, the bit with the other hand, and then hit the release on the chuck on those models. In terms of size, the Craftsman was one of the longer tools overall, which means you might not be able to get it into tight places. That may or may not be a problem, depending what kind of work you do. This tool would be fine for general construction, and it’s still smaller than a typical cordless drill. 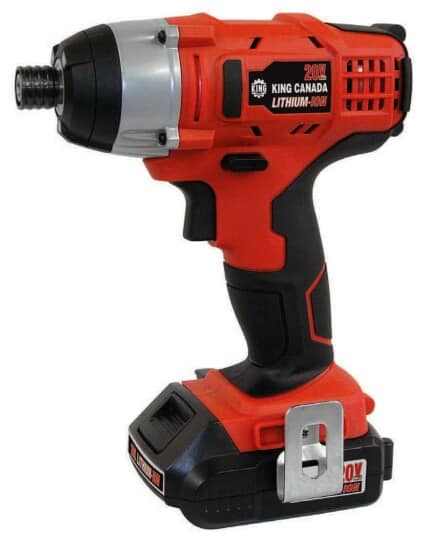 The King impact was pretty well balanced overall. Even though it was the longest impact I looked at, it didn’t feel awkward or top heavy. It had all the typical stuff that you see on impacts these days: fuel gauges on the batteries; a light on the tool; and a belt clip. One thing I noticed with the King impact is that it has a lower RPM range than the others. The top speed of the King impact is 2200 RPM while most I tested were 2800-2900 RPM. Even though it doesn’t seem like it would make a big difference, it was noticeable. This difference is a bit of a double-edge sword. On one hand, driving the self-tapping screws did take longer than other impacts; but the King was still able to do it, though, which is pretty admirable.

If the RPM of the tool drops too low, the screw won’t be able to drill through the steel beam, and you’ll never be able to get the screw in all the way. On the other hand, I felt that the King impact was a bit more sensitive for speed control on the low end.

This is an advantage when working with really small screws. 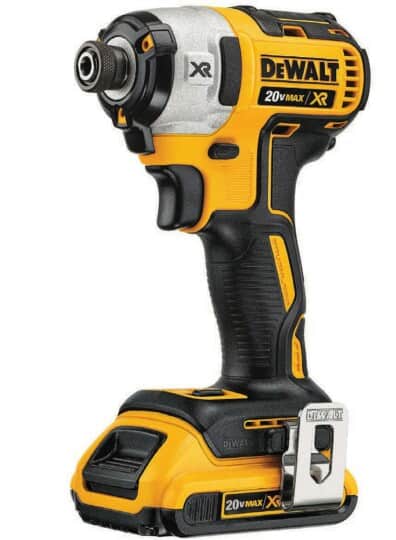 The DeWalt impact felt a bit top heavy, which was surprising because the head of the tool was the smallest of all I tested. The DeWalt battery is quite light compared to some of the others, so this is probably why the balance feels different. The DeWalt impact also has a one-handed chuck, where you can lock the bit in place without moving a release collar first. The DeWalt impact was able to take the odd concrete anchor out for me, which was a bit of a surprise. The top-of-the-line model I personally use day-to-day can only take out the odd anchor. I usually have to use a pneumatic impact to complete that job. Quite frankly, the DeWalt impact I tested is one of their entry-level tools. They do make more powerful mod­els, so I’m impressed that it can compete with something higher end. This DeWalt model is also brushless, which means the motor is more durable and will get better battery runtime compared to a similar brushed model. 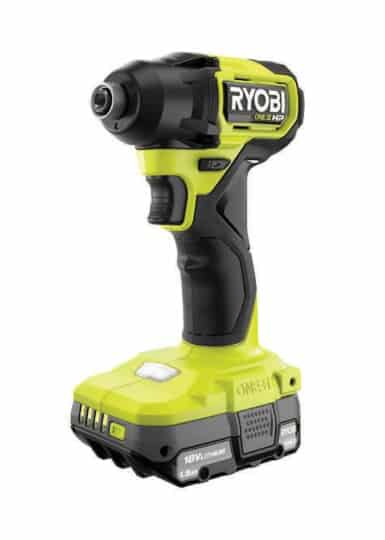 The Ryobi impact has a physically bigger bat­tery than the other tools I tested. I found that it was pretty stable when I set it down on the bench. Many cordless drills tend to be top heavy and tip over with a little breeze so I didn’t mind the fact that the Ryobi could stay upright on a wiggly bench. The Ryobi had a noticeably more aggressive impact sound than the other drivers tested. It was a bit faster driving the self-tapping screws. I’m not sure if this was because of the faster impact rate, because the RPM on the Ryobi was slightly higher than most of the other drivers, or both. The Ryobi also had a fairly small head to the tool, allowing you to get into tight spots. This model is also brushless, which means increased power transfer, among other things. 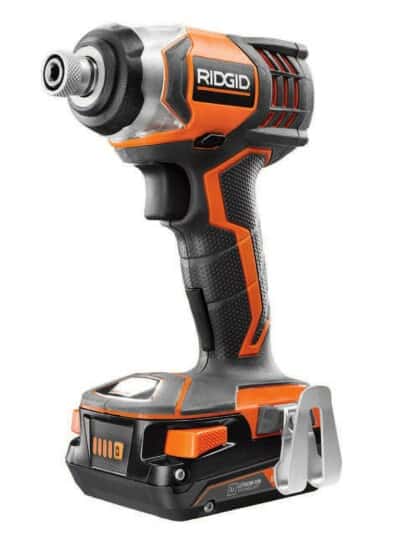 The Ridgid also has a one-handed chuck for both inserting and removing the bit. You can press the bit in with one hand, and it will click in place. You can pull the release with one hand, and the bit will actually shoot across the bench. The Ridgid also has a convenient switch on the handle for the work light. In most impacts, the light comes on when you pull the trigger, but it’s rather helpful to see where you’re going before you hit the gas to get there.

I hope this article provides some insight into impact drivers, and what features to look for when you’re comparing the dizzying array of drivers on the market. The top features I look for in this type of tool are a compact physical size, along with a brushless motor. Brushless motors are much better than the older brushed tech­nology, delivering more power and runtime out of the same batteries that brushed tools use. Other features, such as work lights, belt clips and battery gauges, seem to be pretty standard fare on this type of tool these days. It’s also important to find a tool that feels comfort­able in your hand. Just like not every tool is the same, not every hand is the same. Pick up a few different models to see what they feel like in your hand to get an idea of what you prefer.