If you regularly cut dados, grooves or rabbets, along with tongue and groove, box or half-lap joints on the table saw, it makes sense to invest in a good quality stacked dado set. Dado sets are easy to set up, quick to cut multiple dados precisely, and deliver clean flat bottoms that are perpendicular to the sides. Dados cut with a standard table saw blade need to be cleaned up with a shoulder plane, chisel or sandpaper, while cutting dados in large panels on a router table is awkward at best. All stacked dados are made up of two scoring blades (the outside blades) separated by one or more chippers and shims. The scoring blades have teeth ground on an angle in one direction and serve to cut a clean crisp outer edge on each side of the dado. The inner chippers do the grunt work removing the bulk of the waste, while shims, which are inserted evenly between the blades, enable you to fine-tune the width of the dado. Most dado sets come with two 1/8″ chippers that have two wings, some chippers have four wings. Premium dado sets also include 3/32″ and 1/16″ chippers. Chipper thicknesses refer to the thickness of the plate, not the teeth. Shims, usually made of metal but sometimes plastic, come in thickness from .004″ to 1/16″ – the latter are sometimes referred to as spacers

I find that a dado set is just as easy to set-up, much quicker to use, and both safer and less stressful than cutting dados on a router table. You can also use a dado set to cut grooves, rabbets, tenons, box joints and half-laps. The more you use a dado set the easier set-ups become. For a general overview of how they work and how to set-up and use them, read “Introduction to Dado Sets“.

Dado sets are available in 6″, 8″ and 10″ diameters. I tested the five brands of 8″ dado sets that are most widely available at retail outlets or online across Canada.

To test the dado sets I cut ten each of 3/8″ and 11/16″ dados in various 3/4″ hardwood (maple, ash, alder) and 3/4″ sheet goods – plywood and MDF – three of the common materials most woodworkers use. I used the same dado sled for all cuts. With the hardwood and plywood I made cuts both with the grain and across the grain. I timed how long it took me to assemble the stack for each of the three dado widths that I cut and I measured each completed dado to verify cut accuracy.  When inspecting the dados I looked for clean, chip-free shoulders and flat bottoms. 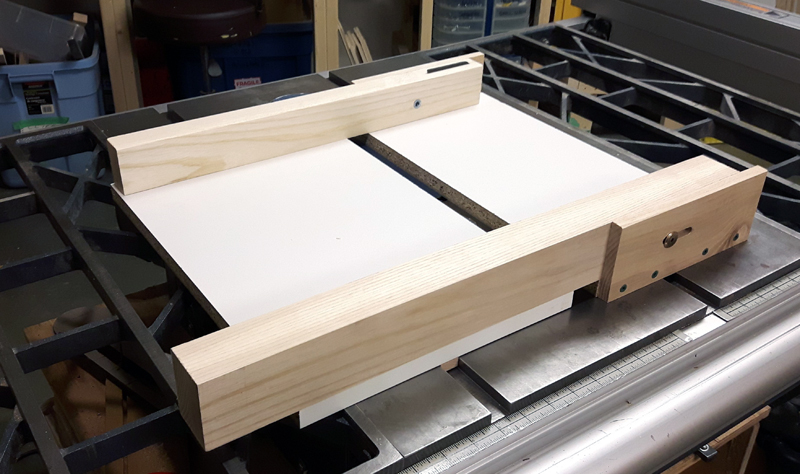 When installing a dado set you want to ensure that the blades and chippers will run true, especially if you work in a dusty shop. Make sure that the arbor on the table saw is clean of any dust that might get caught between the arbor washer and the outer dado blade. It’s also a good idea to wipe down the sides of the dado blades and chippers, particularly if they’ve not been stored in a dust-free cabinet. You may  find that non-magnetic shims have a tendency to slip down onto the arbor threads. To prevent this add a drop of machine oil to one side of the shim and then center it on the blade.

There are a number of similarities between the five brands of dado sets. The range of dado widths you can cut is almost the same for all 5 sets – with only a 3/32″ difference between them.

All have laser cut plates and C4 micro-grain carbide teeth with a top bevel of 20 degrees. Diablo (Freud) is the only company that manufactures its own carbide – a product called TiCo, a combination of Titanium and Cobalt.

I measured teeth width and length using a Neiko digital caliper and found that the variation in tooth size is, in reality, quite small, with the DeWALT teeth marginally smaller and Forrest teeth marginally larger. All 5 sets have teeth with a negative hook angle that helps reduce tearout. The teeth on both the scoring blades and chippers can be resharpened. How often you need to resharpen and how many times you can resharpen them will depend on often you use the dado sets, the depth of cuts you make, your feed rate and the material you typically cut.

Two of the sets (DeWALT and Forrest) have 24 teeth per blade – the others have 12 teeth. When ripping or crosscutting on a table saw you can expect that blades with more teeth will give a smoother cut. However, for a dado set the primary function of scoring blades is to cut square outside edges on the dado. I found this true when cutting sheet goods – on hardwood all the blades gave smooth shoulder cuts. The 24-toothed blades will likely stay sharp longer (and won’t have to be resharpened as often) as each tooth takes a smaller bite.

The Irwin, CMT and Diablo scoring blades are coated, which helps protect the blade from heat build-up, gumming and corrosion. Both the Diablo and Irwin scoring blades and chippers feature an anti-kickback design.

The shims on the CMT, Diablo and Irwin sets are not stamped with their thickness. You can write the thickness on the chrome shims using a Sharpie but not on the blackened shims. It’s a tad frustrating to have to resort to a caliper when you need to find the right shims.

The CMT, Diablo and Irwin also come with a very handy reference card that lists the various combinations of chippers and shims to use for a specific dado width. The cards conveniently attach to the dado carry case. Stacking instructions for the DeWALT and Forrest are printed on the product instruction sheets, which are more prone to being misplaced. All five sets come in a plastic storage/carry case that protects your investment. See the accompanying chart for more comparative details. The CMT set is quite similar to the Irwin in that it’s manufactured in Italy and has 12 teeth on each scoring blade with a -12° negative hook, along with three 2-toothed chippers. The scoring blades have a convenient ‘setting point’ that enables you to quickly position the chippers so they’re optimally spaced. I found that the CMT blades had somewhat less chipout on the shoulders on plywood than either the Irwin or DeWALT. 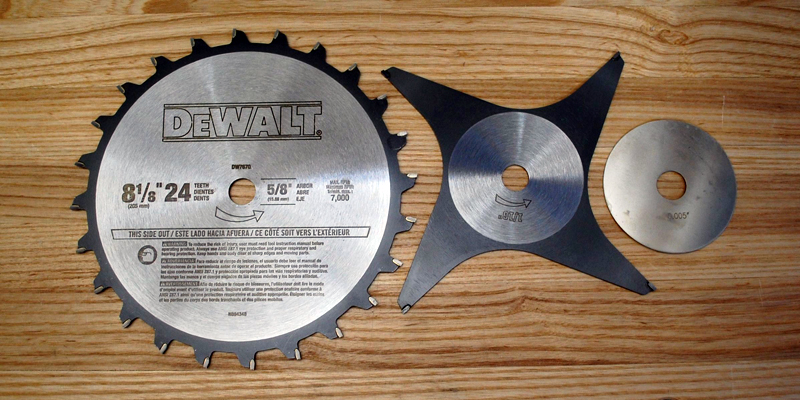 The Thailand made DeWALT set has, like the Forrest, 24 teeth per blade with a -5° negative hook and chippers with 4 cutting teeth. The scoring blades are listed as 8-1/8″ though I measured them at 8-1/16″, not much of a difference. The shims have their thickness conveniently stamped on one side.  This set has the best carry case – a study lockable hard-shell case that seals the blades from dust and debris and does a better job of keeping them protected than does the open carry cases the other sets use. The DeWALT made very good cuts in hardwood but had a bit more tearout on plywood than the CMT set. 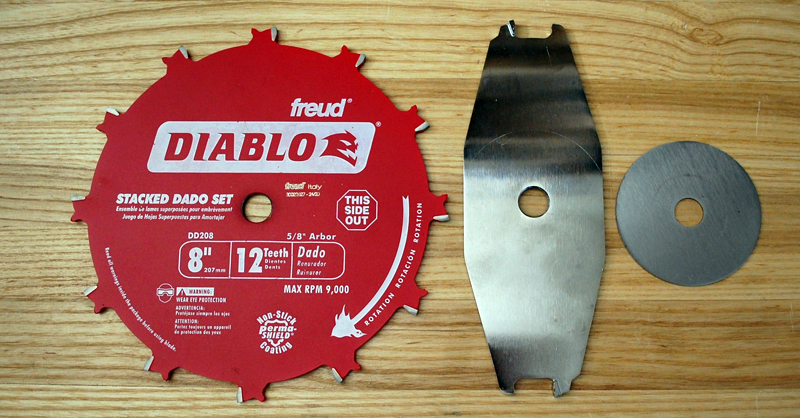 It’s fair to say that the general consensus among professional and hobbyist woodworkers is that Diablo blades provide an optimal balance between value and performance. The Diablo dado set is made in a Freud-owned manufacturing plant in Italy. Similar to CMT and Irwin the scoring blades feature 12-teeth but with a -5° negative hook. The chippers have two cutting teeth. The cuts made by the Diablo set were almost identical to those made by the CMT set. 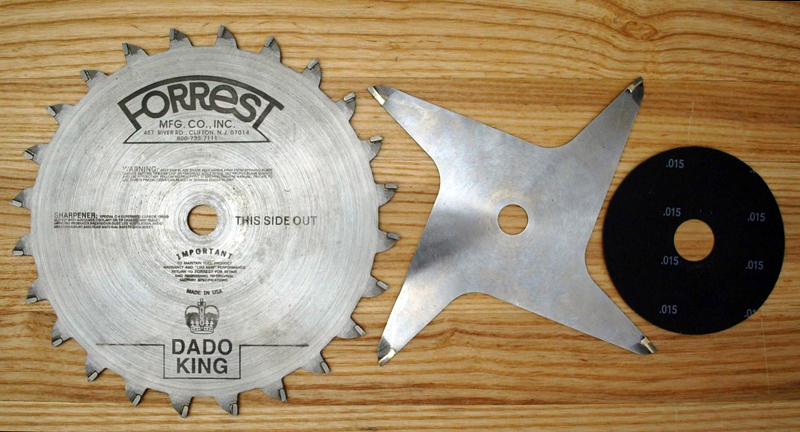 Made in the USA, Forrest blades, like Diablo blades, are consistently ranked among the top performing table saw blades in the woodworking industry. Similar to the DeWALT set, it features 24 tooth scoring blades and 4 tooth chippers. The size-labelled magnetic shims are a treat to use – they stick to the blades so you won’t have to fish for shims accidentally dropped down the throat of your table saw. This dado set, aptly named the Dado King, made as close you can get to flawless cuts on just about every cut that I made. 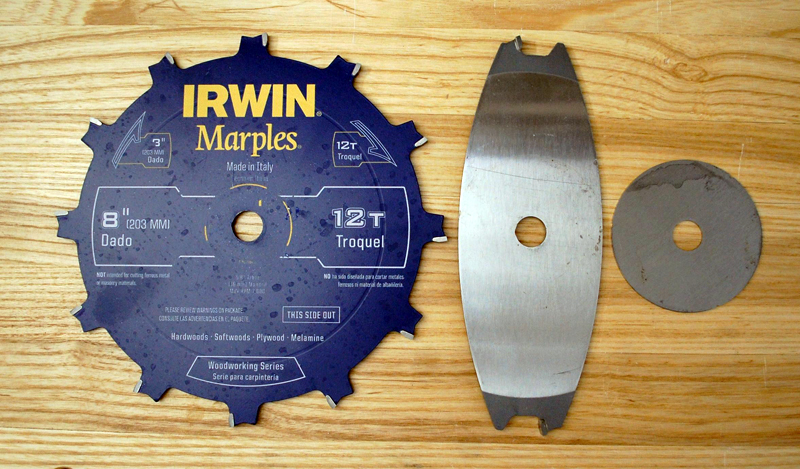 Manufactured in Italy, the 12-tooth Irwin set features a -12° negative hook on the scoring blades and chippers. Each of the three chippers have 2 cutting teeth. The more aggressive negative hook didn’t make a noticeable difference on the quality of shoulder cuts. This set produced good results in hardwood and MDF, less so in plywood. It’s the least expensive set so a good choice for anyone who doesn’t cut a lot of dados.

After making some 300 test cuts in hardwood and sheet goods I’m petty confident in saying that any of these five sets will cut acceptable dados, grooves and rabbets.

All produced the little ‘bat wings’ on the edges of the dado – this is because the scoring blades are slightly oversized to reduce tearout. If this is an issue you can use a shoulder plane or router to clean up the end of the dado that shows. I was also pleasantly surprised to see that the dado bottoms were consistently flat for all of the dado sets. The chippers do the grunt work here, and as long as their teeth are sharp and flat you can expect the same for the dado bottoms.

The Forrest dado set gave consistently cleaner shoulders in all three materials. The other dado sets had some minor, almost negligible, tearout in hardwood but somewhat more pronounced tearout in plywood. All the sets had very little tearout in MDF.

If you won’t be cutting a lot of dados, then you’ll likely be happy with the economically priced Irwin, CMT or Diablo dado sets. When looking at all the dados that I cut it was hard to distinguish any significant differences between these three sets (other than noted above).

Having 1/8″, 3/32″ and 1/16″ chippers made the DeWALT and Forrest dado sets quicker to setup. I also felt that the four toothed chippers on these dado sets delivered smoother cutting.

If I were taking a dado set regularly to a jobsite, I’d opt for the DeWALT set. The Forrest set is the one to get if you want the best possible dados, grooves and rabbets in the widest range of materials. 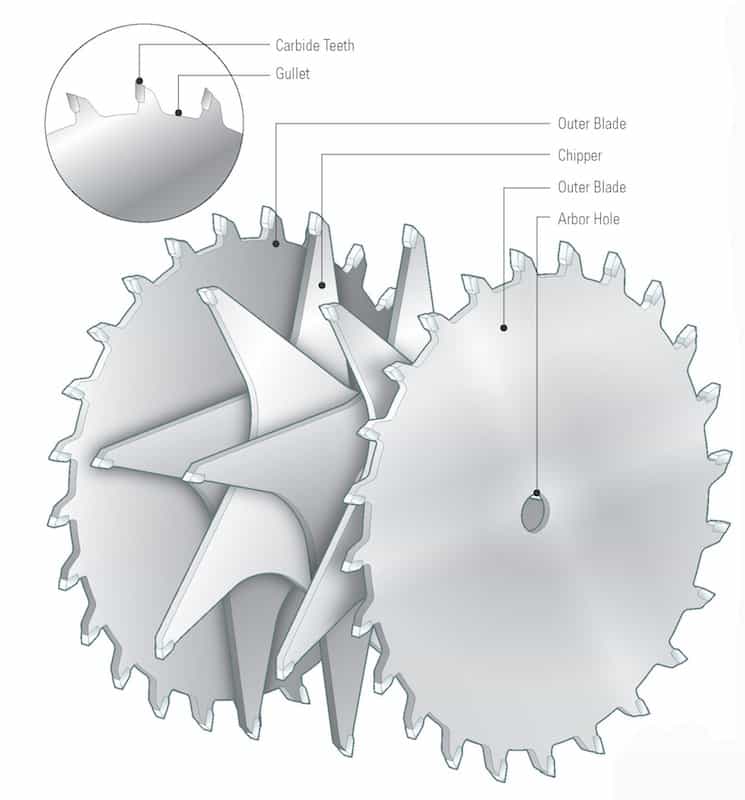 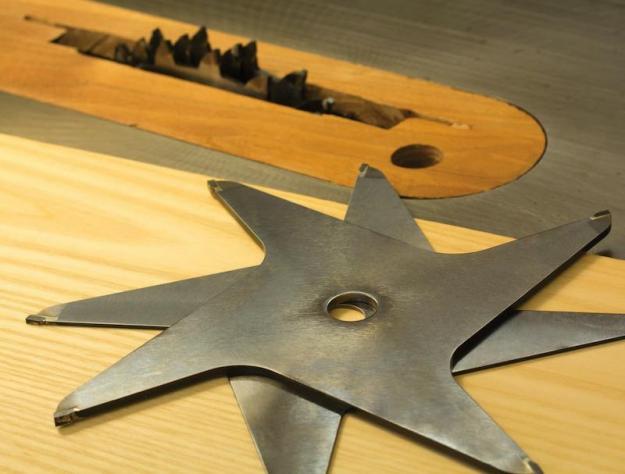