If you work in a small shop, then you know how difficult it can be to arrange your machinery efficiently. Adding new equipment can be next to impossible. Combination machines enable you to get more machinery per square footage of shop space than conventional stand-alone machines. Even if floor space isn’t at a premium in your shop, there are a lot of advantages to combo machines. 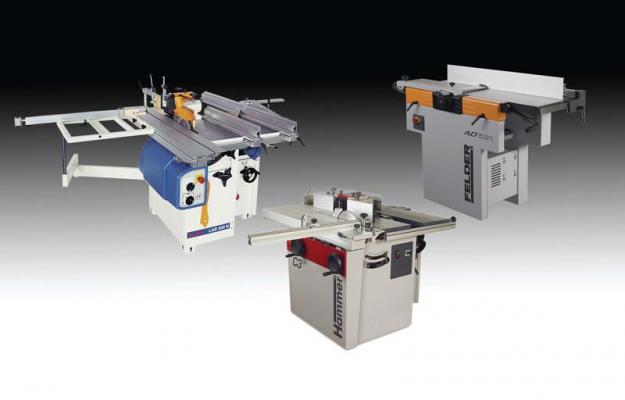 When it comes to acquiring machinery, most woodworkers think of ‘and’ buying. I’ll buy a table saw and a bandsaw and a jointer and a planer and a… . In part this is because virtually all North American manufacturers sell single-function machinery. European manufacturers, on the other hand, have long produced compact machines that perform multiple tasks. These combination machines are common in Europe. You may be unaware, however, that several such brands, most notably Felder (felder-group.ca) and Mini Max (minimax-usa.com), have been available in Canada for a number of years.

Combination machines come in two main configurations: a 2-in-1 combo (jointer/ planer, table saw/shaper), and a 4-in-1 combo (typically combining a table saw, jointer, planer and shaper; often an optional horizontal mortiser is available). There are a variety of engineering refinements that distinguish these machines.

On a combo machine a 3 HP, 220 Volt motor is likely the smallest you’ll find, compared with a 1 to 1 ½ HP, 110 Volt motor on standard Canadian machines. A 220 Volt motor will run more efficiently and cooler than a 110 Volt motor, and you’ll appreciate a more powerful motor when cutting thick, long stock. The 4-in-1 combos will typically have multiple motors. For example, the Hammer C3-31 has three 4 HP motors: one for the table saw, one for the shaper, and one that the planer and jointer share. Unique to European machines I believe, is the inclusion of a separate power switch that cuts all power to the tool, and which can be locked for safety (or unauthorized use). They also use electronic or mechanical switches that stop saw blade rotation within ten seconds of pressing the ‘off’ switch. Along with multiple motors are multiple dust ports on the 4-in-1 machines: typically one or two at the base of the machine, a separate port for the shaper, ports for the jointer/planer, and a dust port integrated into the blade cover.

A common misconception is that it takes a lot of time to switch from one operating mode to the other, particularly from jointing to planing operations. In practice, I have found the average change-over time to be under two minutes. To reduce the number of change-overs you’ll find it expedient to plan out your work schedule in advance, and work in a methodical fashion.

Obviously, four machines grouped together will weigh more than a single machine. Weights vary considerably though: the four component MiniMax Lab 300N weighs 860 pounds (390 Kg), twice as much as the General 50-250 table saw (409 lbs/186 kg), while the four component Hammer C3-31 comes in at a hefty 1,190 lbs (540 kg), three times as heavy as the General. Moving these machines around the shop can be a bit of a challenge. Fortunately most manufactures have an optional rolling carriage with a lifting bar and steering roller. With a rolling carriage you can manipulate a combo machine with the greatest of ease. All this extra weight has an additional benefit – it substantially reduces vibration and helps absorb motor noise. The combo machines I have seen in use are noticeably quieter than stand-alone machines. Remarkably, these combo machines are designed to pass through a standard 32” doorway.

One of the most admired features on combo machines is the sliding table. If you’ve not used one before, then you really owe it to yourself to try one out at a woodworking show or store. A sliding table does away with the need for a cross cut sled, and it makes processing large panels and repetitive precision cuts so much easier; you don’t push the stock, you push the table on which the stock rests. An advantage of this set-up is that it forces the user to stand on the left side of the machine, out of the line of the saw blade, a much safer position.

A riving knife, in conjunction with a blade cover, has been a standard on European machines for decades. The riving knife is attached to the arbor assembly and moves in tandem with the blade, unlike the splitter and blade guard set-up on North American saws that must be removed for many cuts. The blade covers are super quick to remove as well. On the Felder and Hammer machines the throat plate and the opening for the saw blade is much narrower than on stand-alone saws; safer when milling thick stock, and eliminating the need to replace the plate with a zero clearance insert.

These combo machines offer lots of other features, some standard, some available as options: rip fences that can be set in an alternate low position when milling narrow stock; self-aligning cutterhead knives; optional 4-knife cutterblocks; optional Tersa knife systems on the joiner/planer; and reversible, tilting shapers that operate on a double trunnion system. There are numerous accessories that can also be added to these machines, including horizontal mortisers, scoring saw attachments, and extra large outrigger tables.

A combination machine does cost more than the equivalent stand-alone counterparts. The Felder AD531 jointer/planer retails at $6399.02, the Hammer C3-31 4-in-1 is priced at $ $9,223.03, and the Mini Max Lab 300N costs $8,699.00. Bear in mind that these machines have many built-in features that you are likely to add on to stand-alone machines, while offering additional features that can’t be found on conventional machinery.

In the final analysis it comes down to the kind of woodworking you do, the level of precision you want in your machinery, and the amount of money you are willing to invest in your business or hobby.

Carl is a furniture maker based in Victoria, BC and the web editor of Canadian Woodworking & Home Improvement Magazine.