An impact driver is not a drill/driver. Although impact drivers aren’t new on the market, it seems that manufacturers are promoting them somewhat more agressively of late, and as a consequence, an increasing number of our readers have been asking about them. Although they look a lot like the conventional drill/driver you are likely familiar with, impact drivers are a different breed of tool.

To begin with, they are much smaller and lighter than drill/drivers – at least 30% more compact and half as heavy. And in that small package is a veritable ‘mighty mouse’ of power – they provide 4 to 5 times the torque and twice the speed of drill/drivers. How is this possible you ask? It all has to do with the technology inside the driver. Basically, a drill driver applies rotational force, a hammer drill applies impact force, and an impact driver applies both rotational and impact force.

The motor applies the rotational force; when additional torque is required the compression spring kicks in, causing a hammer gear to strike against an anvil, applying impact force. You can easily tell when the impact force kicks in, as you hear a load ratcheting sound.

A Basic Set of Features

These drivers share some common features. All have ¼” quick-change, spring loaded hex chucks. Accessories to use with these drivers are available from various tool suppliers, including Lee Valley (drill, screw bits, and countersinks with ¼” hex shanks) and Canadian Tire (¼” socket adapters).

The drivers all have soft grip handles and step-less variable speed triggers with lock switches built into the trigger. You control the speed by applying pressure on the trigger. To cap things off, all the models we looked at came with a plastic carrying case, charger, 2 batteries, and instructions.

We tested five 12V models and one 14.4V (primarily because we like Milwaukee tools and they don’t have a 12V driver).

To begin with we fully charged the batteries, then fastened 1 ½” #8 screws into a triple layer of ¾” plywood. We also did this with 2″ and 3″ #8 screws into 2 x 4s. Then we tried each of the drivers with ½” by 6” lag screws into 2 x 8s. We drilled holes for ⅜” lag bolts and anchored them with nuts between two layers of 2 x 4s. Finally we pre-drilled and then drove 2 ½” self-tapping concrete screws into concrete blocks.

Unlike drill/drivers, there is no clutch – there’s just a trigger. It doesn’t take long to get the hang of how much pressure to exert when setting or retracting screws. These tools are ideal for both carpentry and mechanical jobs. With them you can set just about any size carriage/lag bolt or extra long screw with ease – and they are easier and quicker to use than standard wrenches and ratchets. While they excel at driving long screws (2″ and over) you won’t likely want to use them for setting small screws, such as installing cabinet hinges or drawer slides – for this you need low torque and low RPMs. None of the units we tested offered the option of turning the impact mechanism off.

The common complaint with all these tools was the noise level. In rotational mode they sound like drill/drivers, but when the impact mode cuts in, it sounds like a mini jackhammer. We didn’t measure the decibel ratings, but suffice it to say that the ratcheting sound is loud. The noise is a result of the hammer hitting against the anvil. For prolonged use you’ll need to wear hearing protection.

When it comes to brute force, the Hitachi, with it’s 1190 inch-pounds of maximum torque, is the clear leader, closely followed by the Panasonic (1060 inch-pounds) and DeWalt (1000 inch-pounds). The Milwaukee, Black and Decker, and Makita develop from 38% to 25% less maximum torque than than the Hitachi. In terms of speed they are all fairly close. The Makita, with the lowest no-load speed of 2300 RPM is only 11% below the top rating of 2600 RPM. Only the Panasonic and Black and Decker had impact rates below 3000 BPM (2600 and 2800 respectively). What does all this mean? In our tests all the units were able to drive the array of screws and bolts we used without a hiccup. Bear in mind that we weren’t using them for hours on end, so this is not a comment on how durable these units are over an extended period of time. For intermittent use, we can say that they all performed very well.

The Panasonic, Makita, and Hitachi tied for longest run time, with the DeWalt and Milwaukee coming a close second. The Black and Decker had the shortest run time. The Makita recharges the fastest (45 minutes), with the rest taking one hour. That’s no big deal, as they all come with 2 batteries. Changing batteries (and exchanging bits) was simple and quick on all units. While all the drivers offered reasonably good balance and feel, the consensus was that the Hitachi felt the best ‘in hand’. Surprisingly it was among the heaviest at 3.5 pounds. The Milwaukee, which was the largest, was listed as the lightest (2.5 lbs) – but felt as heavy as the Hitachi. We liked the 20° upward tilt on the head of the Makita. The head on the DeWalt is at 90° to the body, while on the other units it’s tilted up from 5° to 10°. Because these drivers are so light you can tote them around easily on the job. Those who liked the belt hooks on the Hitachi and Panasonic really liked them (in particular the style on the Panasonic), but no one was all that keen on the lanyard, which all but the Panasonic and Black and Decker offer. The younger lads didn’t think that they would get much use out of the work lights, but those of us with failing eyesight thank Hitachi and Panasonic. The preference was for the Hitachi with an on/off switchable light rather than Panasonic’s trigger activated light.

The Hitachi driver was the coolest looking of the lot and even offered decals that you can apply to the gear case cover to personalize your tool. It also has the easiest access to the carbon brushes, which will eventually require replacing. The Panasonic is the only one to offer a switchable high and low impact mode setting, which we all thought was clever. The Milwaukee has a reversible battery which should come in handy in tight quarters.

Our general consensus was that a first choice for the professional tradesperson looking for top quality is the Hitachi. Ask yourself why so many tool rental businesses use Hitachi – they have a deserved reputation for being tough and dependable. 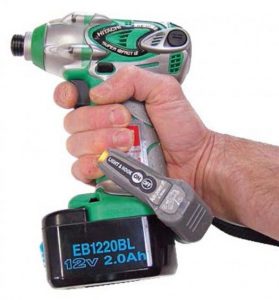 The Panasonic would be a good second choice but for its 1 year warranty. For carpenters, cabinetmakers, avid home handypersons, and the like, we felt that both the Makita and DeWalt offer great value. We all own various Makita and DeWalt power tools and rate them highly.

The DeWalt 3 year warranty makes it a bit more attractive. The Milwaukee seemed like a lonely fellow at a dance – it’s oddly priced for what it offers – not as much as the Hitachi/Panasonic, and about the same as the Makita/DeWalt – except that nice 5 year warranty.

For the DIYer or someone who wants to knock together a weekend project involving a lot of heavy screwing and bolting, the $130 Black and Decker is priced just right.