After much anticipation, the Delta Unisaw is finally ap­pearing on showroom floors. More than a year has passed since the first hyperbolic ads started ap­pearing in the trade magazines. These ads promised a brand new Delta Unisaw, re-built from the cabinet floor on up.

For those not familiar with the Delta Unisaw, it is the standard from which all other table saw manufacturers have based their products. The world’s first tilting ar­bor table saw was produced over 70 years ago, in 1938. The woodworker’s world was turned upside down with the intro­duction of this extremely accurate cabinet saw. Since then, hundreds of thousands of Unisaws have found their way into home and cabinetmaker’s woodshops around the world. Delta has tweaked the Unisaw in those seven decades but they never made a major overhaul. 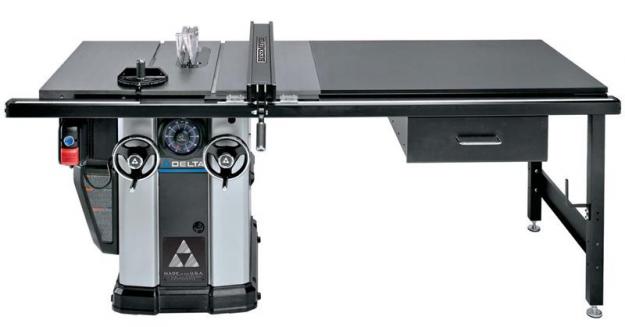 In 2002 the corporate heads of Delta got together and decided that it was time for an entire re-make of the Delta Unisaw. A think-tank was formed and the decision continued even through the company’s sale to Black & Decker in 2005. This think-tank also decided that the new Unisaw would be manufactured on this side of both oceans with almost all American parts. The new Unisaw would be totally re-engineered with fea­tures never before seen in a table saw.

The first and most formidable task would be to engineer new controls for the blade raising and tilting function that would place them on the front face of the cabinet. This meant the total re-design of the trunion, the heart of the cabinet saw. Many prototypes were tried and rejected for one reason or another. After much testing and fine-tuning a totally new one-piece, cast iron trunion was developed. This one feat of engineering and design weighs just 97 pounds.

The new trunion allows the blade height and bevel controls to be mounted up front on the cabinet with an easy-to-read bevel dial accurate to ¼°.

The Power Behind The Unisaw

Delta decided at the outset that the new Unisaw, would be made in the USA at their Jackson, Tennessee facility and they strived to maintain this.

Delta has had excellent results with the totally enclosed, fan-cooled (TEFC) elec­tric motors made by Marathon Electric in Missouri. They couldn’t prove that all of the motor windings are US made so Delta labels the new Unisaw as “Proudly made in the USA of domestic and for­eign components”.

A very quick glance at the appearance of the new Unisaw and older models may perhaps seem to be the same; a clos­er inspection should impress even the most stoical woodworker. Aside from the up-front controls there are at the least, a dozen or more new and innova­tive features incorporated into the new tool.

One often heard complaint was the constant dropping of the arbor nut into a pit of sawdust when changing blades. Delta addressed this problem by provid­ing an access door just below the blade controls and a new, larger throat open­ing. Your knuckles will suffer no more.

Delta increased the efficiency of their sawdust removal. There is a split 5″ dust port at the rear of the cabinet that takes sawdust from a blade shroud as well as dust from the cabinet interior. Should the dust collector miss something then there is a large door on the side of the saw for easy access. Delta includes a 5″ – 4″ reducer for convenience.

The heavy US-made cast iron table top is different as well. The new table top has a full 15″ of clearance in front of the saw blade. This is a big advantage when handling large sheets of plywood and other sheet goods.

The user will be quick to notice the new split blade guard that is a European standard and soon to be a safety require­ment in the US and Canada. The blade guard allows you to clearly see what you are cutting and the new riving knife pre­vents jamming. The riving knife raises, lowers and tilts in concert with the blade. The riving knife can be manually low­ered for non-through cutting. The new anti-kickback pawls as well as the blade guard may be quickly removed without tools and a lever in front of the cabinet releases the riving knife.

The new side table has been beefed up with 2″ aluminum tube legs for stability along with a steel frame. The black plas­tic laminate top has other new features as well. For example you will now find a cradle on the cross-braced legs to store the rip fence and a bracket to store the mitre gauge. Delta has improved the fastening system to provide a seamless transition between the saw table and the extension.

Neatly tucked under the extension table you will find a fitted drawer. The drawer has sloped pockets for storing blades, riv­ing knives, the blade guard and more.

The new saw is shipped with a full kerf, 10″, 50-tooth carbide-tipped saw blade that is US made. Delta will be offering a full line of 18 blades made in Kentucky.

The new Unisaw is available in three models all with the new Biesemeyer fence. The price of the new Unisaw will reflect this new standard of precision and these im­pressive changes, but one must remember that this is a quality-built tool.