The DeWALT FLEXVOLT Miter Saws are unique in that they’re the only miter saws currently on the market with the ability to run off both AC and DC power. If you’re in close proximity to a 110/120V receptacle just plug it in. Otherwise, install a couple of FLEXVOLT batteries and you’re good to go. And, with the advent of the new FLEXVOLT higher power/longer run-time battery packs, the distinction between corded and cordless power is becoming less relevant. 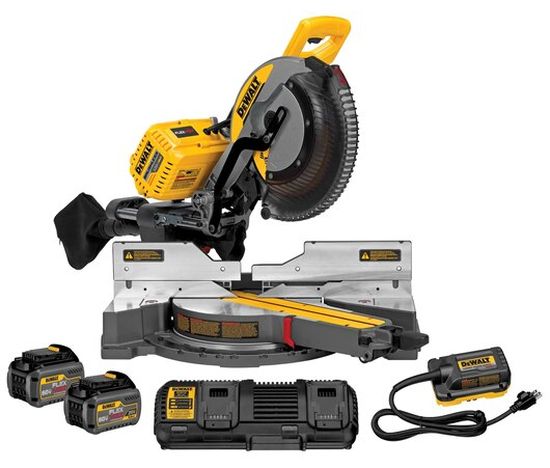 The saws comes in two models, either as a double bevel compound sliding miter saw (DHS790) or a double bevel compound non-slider (DHS716). Otherwise, the saws are much the same. You can also purchase either saw as a full kit with BOTH the AC module and two FLEXVOLT batteries or ONLY with the 120V AC Adapter module. To me it’s a moot point – unless you already have a couple of FLEXVOLT batteries on hand, you’ll want to purchase the full kit in order to take advantage of both power source options.

I’ve had the luxury of using the DHS790AT2 (includes 2 Batteries, Fast Charger, 120V AC Adapter) for several months. My comments, except those that relate to the sliding function of the saw, also apply to the DHS716. 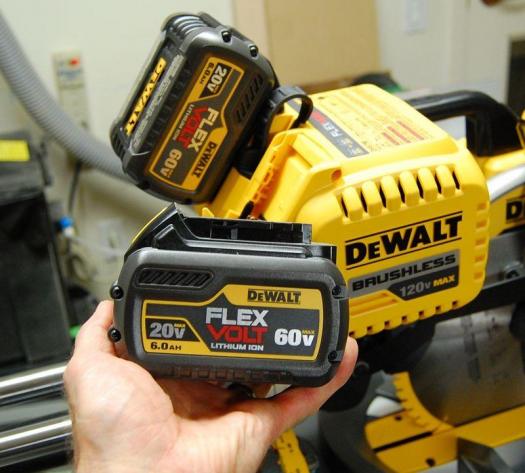 As mentioned, two of these batteries can be installed on the DHS790, to deliver 120V MAX of power and 2.0Ah of run time. According to DeWALT, you’ll be able to make about 300 cuts in 3-1/4″ baseboard on a full battery charge. With the new 9.0Ah batteries the DHS790 will be able to deliver 3.0Ah of run-time, which should move you closer to the 450 cut mark.

As I found out, a single person using the DHS790 can get a lot of work done on a single battery charge. However, where you have two or more people using the saw it won’t take long before the batteries need recharging. Fortunately, with the DHS790 you don’t have to worry about having replacement batteries ready, you can switch it over to AC power in a matter of seconds. This makes it very convenient for someone who needs to use the saw in an area of the jobsite where power hasn’t been connected, where it might be a hassle to run an extension cord, or the power cords are all in use. 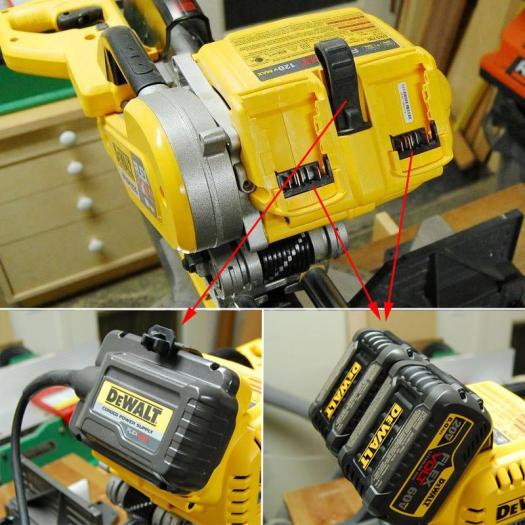 At the back of the DHS790 motor housing are ports on which you mount either the 120V AC corded power module, or two FLEXVOLT batteries. The middle port is for the AC module, while the standard battery ports to the left and right are for the FLEXVOLT batteries. Switching between either power supply mode is very quick. The power cord on the AC module is only 6′ long – which seems to be a standard length for most miter saws. As well, there is no onboard storage for the AC module when not in use. 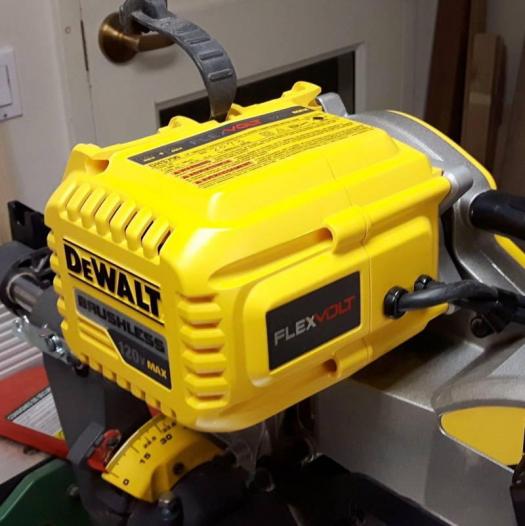 Working in tandem with the FLEXVOLT batteries on the DHS790 is a brushless (BL or BLDC) motor and a digital controller. The controller enables the batteries and motor to work together as efficiently as possible to maximize power delivery and run-time. BL motors are becoming much more common on cordless tools because they generate less electrical noise, less heat, have better torque-to-weight ratios, are more compact, operate at higher speeds, require less maintenance, and have a longer work life. In fact, the BL motor on the DHS790 isn’t much larger than the two FLEXVOLT batteries. The motor does have soft start and a brake that cuts in to stop the blade spinning in about 3 seconds.

You’ll be glad to know that this power source flexibility doesn’t come with any extra weight. At 56 pounds, the DHS790 weighs the same as their corded-only model, the DWS780.

Of course, the convenience of cordless with the power of corded isn’t all that the DHS790 has to offer. Let’s look at some of the more notable features to be found on this saw.

One advantage of 12″ sliding miter saws is the increased crosscut capacity they provide, particularly when making vertical cuts with the stock standing up against the fence. I find it the quickest and most accurate way to cut molding. You might not use the extra capacity of a 12″ saw every day, but when the time comes, you’ll be glad it’s there.

According to DeWALT you get a maximum of 13-3/4″ of crosscut capacity at 0° (up to 16″ using the raised platform technique explained in the user manual) and 8″ at 45°. The vertical cut capacity with molding held up against the fence is 6-3/4″, and with molding vertically nested, 7-1/2″. 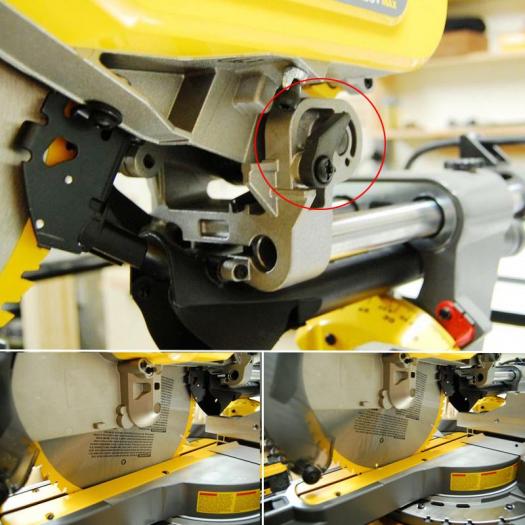 As you can see in the bottom left of the photo above, the saw has a deep depth of cut – about 2″ below the kerf plate . However, you can reduce the depth of cut – for example when you’re cutting tall stock – by moving the depth stop (red circle) forward. You get a shallower cutting depth – about 1″ – but you’ll lose about 3/4″ in the length of the cut, down to 13″. There is a wing nut adjacent to the depth stop that enables you to fine tune the cutting depth.

DeWALT uses the conventional tubular two-rail sliding system for moving the motor carriage back and forth. I found that the carriage glides very smoothly on the rails without any wobble or vibration. If using the saw in a shop or cargo van you do need about 8″ of travel space behind the saw to keep the rails from hitting the wall, and up to 18″ if you choose to use the dust bag or connect the saw to a dust extractor. 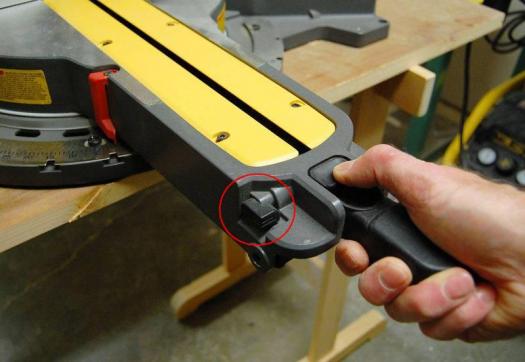 The miter handle moves the table smoothly, 50° to the left and 60° to the right, with the usual common detents of 0°, 15°, 22-1/2°, 31.6°, and 45° in both directions. The detents lock solidly in place without any wobble. The large miter lock lever and miter release button can be easily manipulated with one hand, and there is a miter detent override button (circled in red above) that enables you to slide the arm freely to any position you want. Once the miter lock lever is pushed down the table is rock steady. 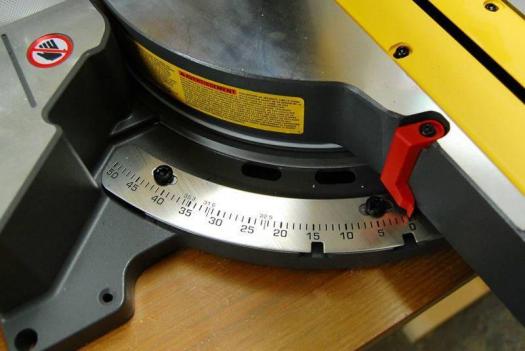 The miter scale, laid out in 1° increments, is laser etched on a chrome plate. I find it quite easy to read the scale in just about any lighting condition, and just as easy to set the angle at 1/2° increments, as the increments are about 1/8″ apart. 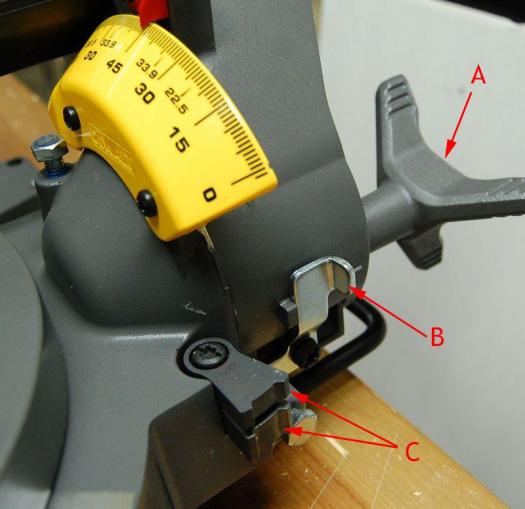 As on most miter saws the bevel release knob (A) is located at the back of the saw. On this saw the release knob is quite large, making it easy to grasp, and you only have to move it about 1/4 of a turn to unlock the head – another 1/4 turn locks it back in place.

The head tilts 49° to the left and right and there are stops at 45°. To move past the 45° setting you simply lower the override lever (B). As well, there are two sets of pawls (C) on either side of the head that enable you to quickly set the bevel at 22.5° or 33.9° when working with crown molding – essentially the pawls work as detents.

When tilting the head to the left to cut anything approaching a 45° bevel yyou need to move the sliding top portion of the fence all the way to the left, and remove the stock clamp if it’s installed. If you don’t use the stock clamp all that much or tend to keep the upper portion of the fence locked to the outer sides it’s not much of a hassle. Either way, it’s unavoidable.

As you’ll also find on most miter saws, the angle marks on the bevel scale are very close together, and as you get older the lines seem to blur together. I don’t bother with the scale all that much now, preferring to use a digital protractor to set the bevel angle. 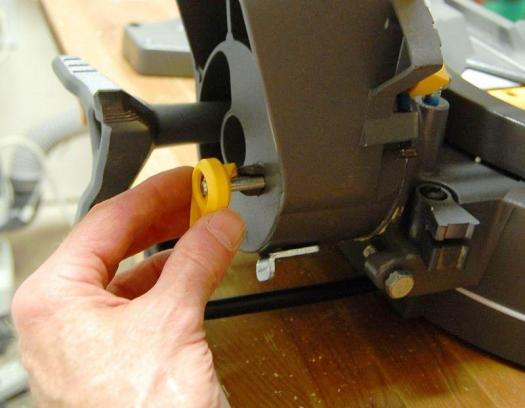 To tilt the head to the right you also need to reach behind the saw and pull a bevel override lever (yellow lever in the photo). Once you’ve done it a dozen or so times it’ becomes ingrained, and you automatically reach for the lever without thinking much about it. 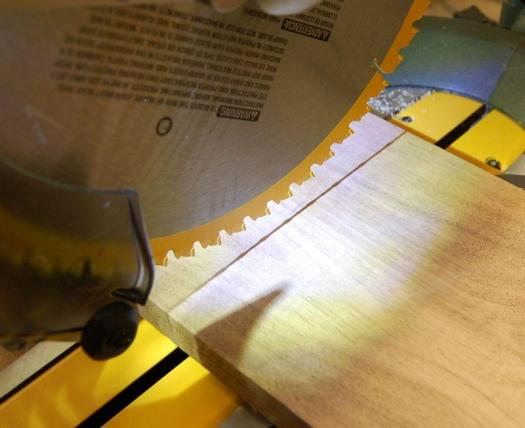 DeWALT’s CUTLINE LED Worklight, found on a number of their miter saws, is a fabulous bit of technology. It projects bright LED light along both sides of the blade to form a narrow shadow of the blade on your stock. The closer the blade gets to the stock the sharper the shadow becomes, until it approximates the width of the kerf. Aligning the blade to your cut line couldn’t be easier, and it works equally well whether making miter or bevel cuts. As soon as you press the trigger the LED light activates, and turns off about 20 seconds after you release the trigger. However, there is a button atop the handle that allows you to switch the LED on whenever you want. It’s a super effective feature I’ve come to depend on. 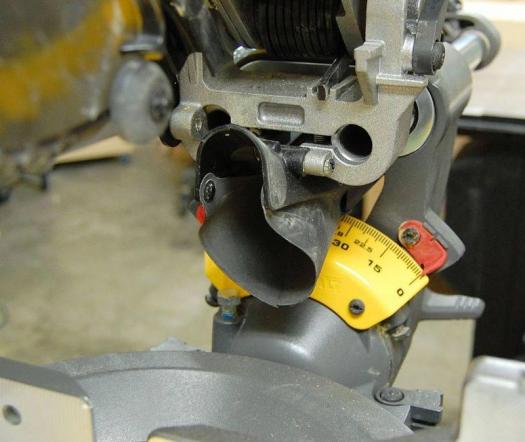 There is a small dust shroud located behind the blade that helps direct wood chips and dust into the dust port that runs to the back of the saw. I imagine that over time it might get chewed up a bit, but it can be replaced. 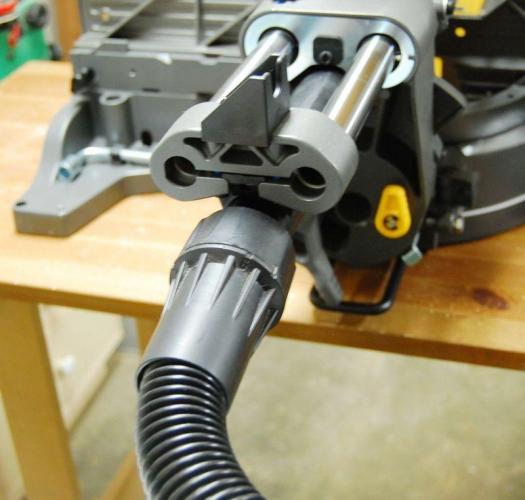 The dust shroud is attached to a plastic pipe that runs to the back of the saw. The saw comes with a dust bag that you can attach to the port and it’ll pick up some of the dust. However, you’ll find it much more effective to connect to a dust extractor to the saw. It still won’t be 100 percent effective, but it will make a noticeable, and worthwhile difference.

The DHS790 comes with a 12″ 60-tooth ATB blade that cuts a .095″ kerf. It’s a smooth cutting blade and I see no reason to upgrade to a different blade unless you need glassy smooth cuts for exposed joinery or fine furniture and cabinetry projects. I’ve only made a few hundred cuts with the blade, so it’s still quite fresh, and I haven’t had the need to remove it for sharpening. However, the process of replacing the blade is identical to what you’ll find on any DeWALT miter saw (and probably most other brands). There is a star driver/wrench that stores on the back of the right side fence for this purpose. The steps involve loosening a bolt, sliding back the blade cover, depressing the spindle lock, and then unscrewing the arbor nut. Fairly simple, especially once you done it a couple of times. 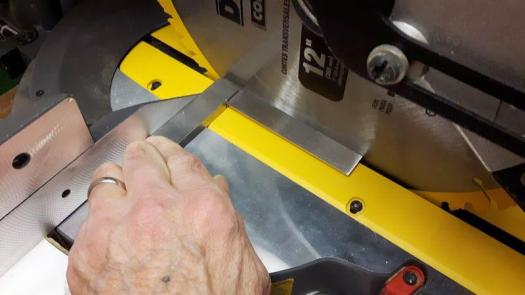 Right out of the box the DHS790 was ready to go to work. I did check to ensure that the blade was square to the fence and to the table, and that the 0° and 45° settings were properly aligned. The user manual has simple enough instructions on how to correct any misalignment. It’s worth taking a bit of time to familiarize yourself with how these adjustments are made, as just about every saw used on a worksite is going to need readjusting at some point.

Without the dual power source, the DHS790 is a great saw. It’s solidly built, durable, has superb cutting capacity, is accurate, has very good dust collection (connected to a dust extractor) and is easy to adjust. The ability to run off battery or AC power makes it the most versatile saw on the market.

If you’re looking for a first 12″ dual compound slider, or want to upgrade to a larger, more functional saw, then you can’t go wrong with the DeWALT DHS790.