It's sturdy, compact, and the stellar sound will keep you groovin' in the shop or on the jobsite.

There is a saying that good things come in small packages. You’re certainly unlikely to find a Bluetooth jobsite radio/speaker that comes any smaller than the Festool Sysrock – and that produces such stellar sound. The Sysrock is about the same size and weight as Festool Syslite Kal II work light, measuring roughly 4″ x 4″ x 6″ and weighing a paltry one and a half pounds. Even with a 5.2 Ah battery installed it beefs up to only 2 pounds 13 ounces. 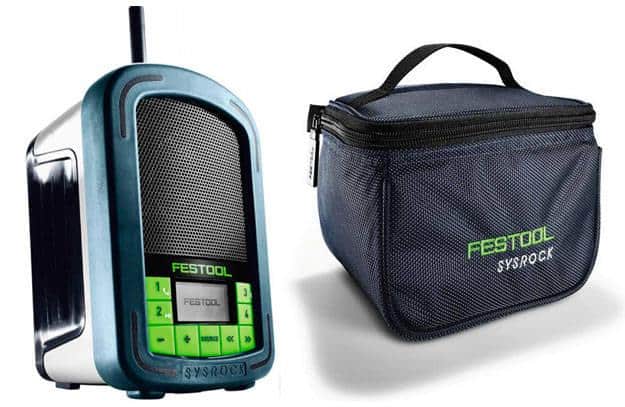 It has an IPX3 water resistance rating, which means that it’s protected against spraying water, though not against immersion in water. While Festool doesn’t specify an IP rating for resistance from dust ingress the rugged casing appears to have no obvious openings where dust can infiltrate and the buttons are all dust-sealed. A thick rubber band runs around the front of the casing which should help deflect any inadvertent knocks or drops.

The Sysrock comes with a handy fabric carry/storage bag and three accessories: an AC adapter, an 18″ AUX-in cable, and a folding attachment handle. Unfortunately, with the battery installed, the Sysrock doesn’t fit into the carry bag unless you remove the accessories. 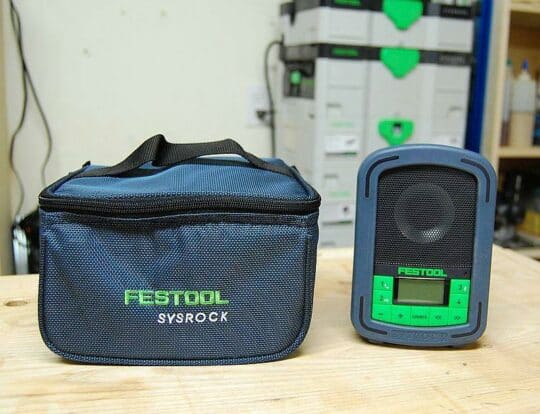 You can use the folding attachment handle to tote the Sysrock around, or hang it from a hook, ladder or scaffold. The handle looks somewhat flimsy to me – time will tell whether the handle will hold up to the rigours of the jobsite. 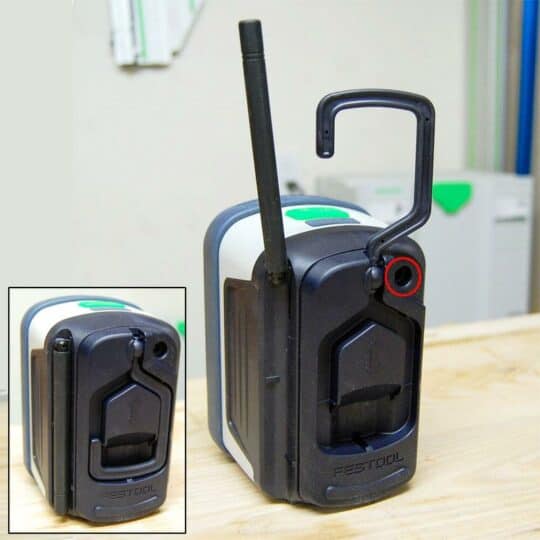 At the top right corner you can see the the socket (red circle in the photo) into which you plug the AC adapter – which has a lovely 8-foot cord – when you want to power the Sysrock with AC current.

To install a battery you simply slide the handle attachment downward to remove it, and then slide the battery into place. However, you loose the functionality of the handle. You’d think that the clever folks at Festool could have come up with a way to integrate both the handle and battery.

You can use any Festool BP or BPC battery with the Sysrock. Play time will depend on the battery amp-hour and the volume at which you play music. With a 5.2Ah battery installed and the volume set at a medium level (around the 50-55dB level), I got an impressive 28 hours of play time. 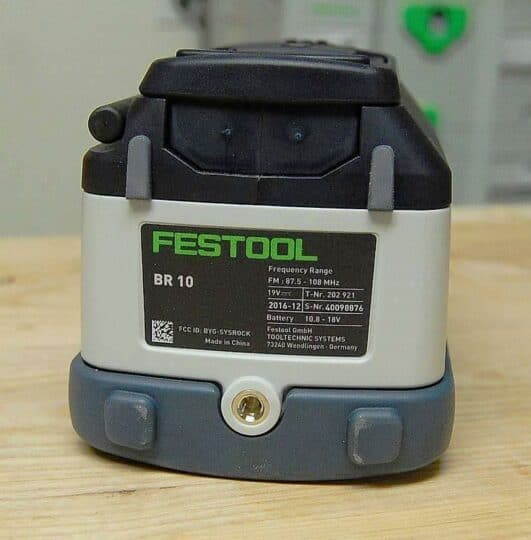 On the base are four feet that provide some protection for the casing, and there is a convenient 1/4-20 thread camera/laser tripod mount. This enables you to position the Sysrock in an optimal location for sound distribution rather than placing it on top of machinery or a benchtop where there may be a greater risk of inadvertent damage. You’ll find this especially handy when moving from room-to-room or at different locations on a jobsite. 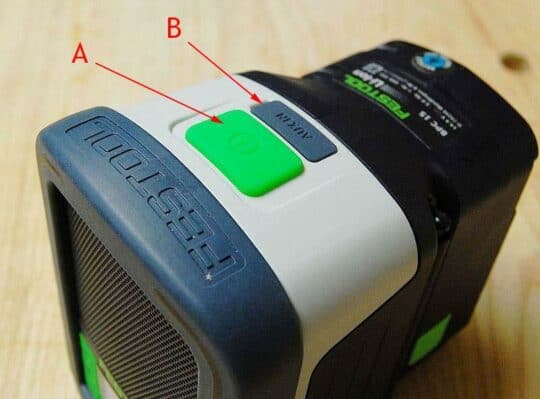 At the top of the Sysrock is the on/off power button (A) and an AUX-in port for connecting non-Bluetooth audio devices (B). 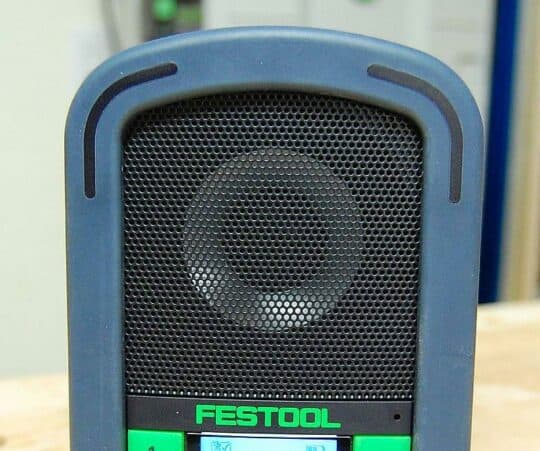 The Sysrock has a single digital 2-1/2″ neodymium speaker with a maximum 10W sound output. A rigid metal screen protects the speaker from damage. The sound is, to my ears, fabulous – crystal clear with a nice punchy bass sound. Radio reception (there is a fold-down antenna at the back of the unit) is good, though I often have to reposition the Sysrock each time I switch to a different radio station – something I haven’t had to do with other jobsite radios I’ve tested. 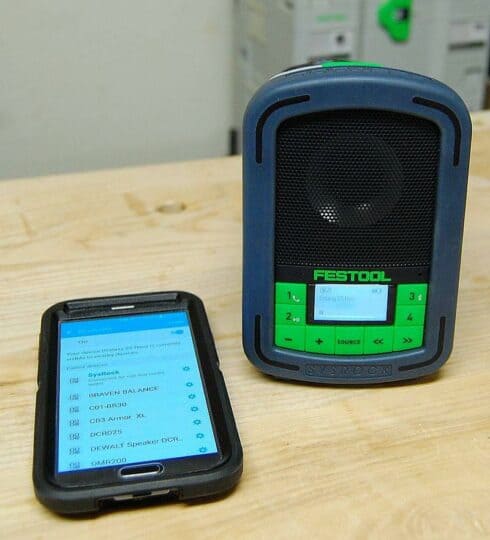 Pairing is straightforward and I was able to get a wireless range of almost 50 feet – with an unimpeded line of sight between the Sysrock and my smartphone. Once paired, you simple press the “Source” button until “Bluetooth” appears on the display and the connection to your audio device is automatically enabled. 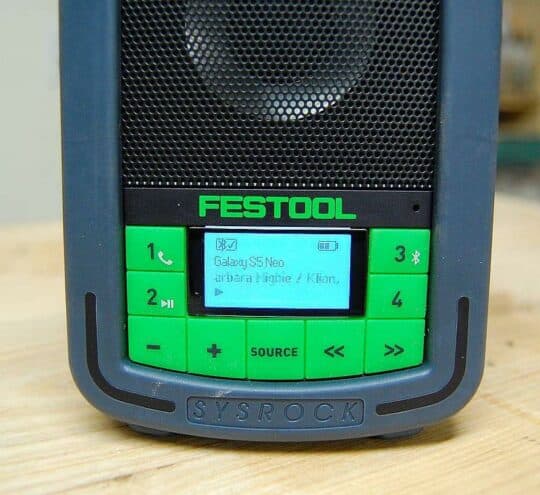 The controls are intuitive and easy to remember, and the icons on the buttons give you a visual clue as to their function. At 3/4″ x 1-1/2″ the screen is fairly small, but reasonably easy to read. Various ‘status’ icons appear on the screen, such as battery fuel level and radio signal strength. The << and >> buttons are used to search or scan radio stations as well as for song progression (in Bluetooth mode). When you receive a phone call the music stops so that you can answer the call – the microphone is located just above and to the right of the “3” on the control pad. There are 4 radio station presets – ample for my listening pleasure.

One thing I find a bit of a nuisance is that the volume level is significantly different between the FM and Bluetooth modes. In my shop I listen to music at about the 55dB level. When tuning to an FM station this means I set the volume scale to 5 or 6. However, when I switch to Bluetooth mode I have to increase the setting on the volume scale to 15 or 16 in order to get the same sound output (the volume level on my smartphone is set at about 70% of maximum output). 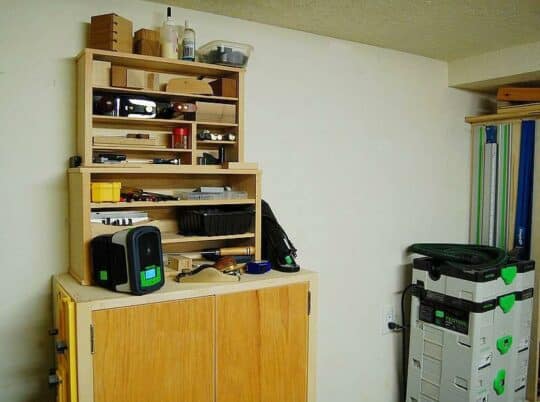 The Festool Sysrock won’t be everything to everyone. It doesn’t include a battery charger, there is no USB port, it doesn’t receive AM stations, there are only 4 FM station presets, and it’s not waterproof.

It is, however, the smallest, lightest, most portable jobsite radio that you’re likely to find. It’s durably constructed, has instant Bluetooth pairing, intuitive controls, and best of all, provides excellent sound.