Today’s woodworker has many options for shaping and smoothing, and invariably the first tools that come to mind are usually powered. Routers and sanders are undoubtedly the most popular choice, but they don’t always provide the fine control required for shaping contoured parts.

Files and rasps have been around for hundreds of years and can be among the most useful tools in the wood shop. They excel at fine control and precise removal of material with little or no tear-out, and are especially useful for highly figured woods. Of course, files are also associated with metal work (such as putting a new edge on cabinet scrapers), but we’ll be looking at woodworking files and rasps here. 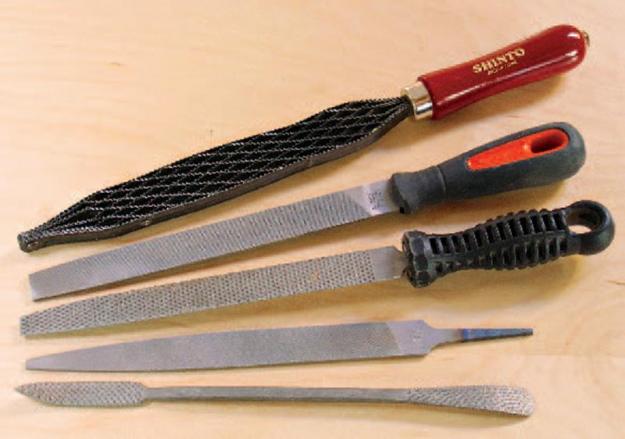 Get a Handle On It

Files and rasps come in various lengths and are measured from the point (tip) to the end of the tang (the narrow, pointed piece on the end of the file). Most files and rasps are sold without handles, so before using them, take the time to make a handle to protect yourself. It is quite easy to accidentally drive the pointed tip into your palm with rather painful results. Drill a hole in a shaped scrap of wood or large diameter dowel and drive the handle onto the tang. The hole should be the same diameter as the middle of the tang. Files are very hard and as a result are quite brittle, so exercise care and place the end of the file on a piece of wood when you drive the handle on. Alternately, you can purchase commercially made handles, usually made of plastic.

There are many ways of using files and rasps, but for the best control, they should be held with both hands. Your stroke technique is very much a matter of personal preference; you can push the tool away from yourself or pull it towards you. What you are looking to develop is a smooth, rhythmic stroke. With very few exceptions files will only cut in one direction, and it is good practice to lift the file off the work on the return stroke. By varying the position of the file in relation to its direction of travel, you change the angle the ridges meet the material at, allowing you fine control over the aggressiveness of the cut and the finished surface. Rasps, on the other hand, can be used bi-directionally. Wrap the heel of the file or rasp with a short piece of electrical or masking tape to protect your work from accidental gouges. Lee Valley Tools sells a handle that will attach to the heel of most files and rasps to provide a second handle. 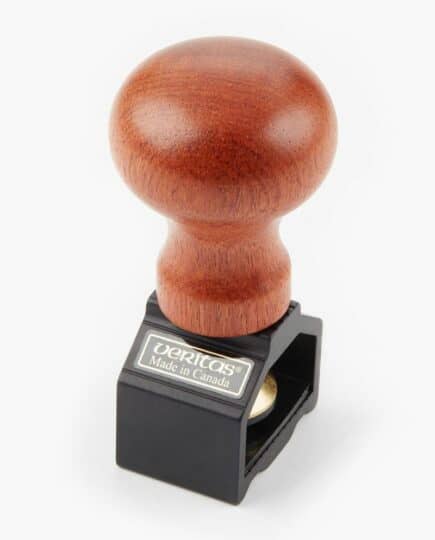 A file is a hardened metal bar which has ridges (or teeth) machined into it at an angle. Any file can be used to shape wood, but just as there are different tooth configurations on hand saws, the same is true for files. These ridges do the actual cutting and their pattern determines the type of cut the file will produce, and the resulting surface it leaves behind. Single cut files have one set of ridges, parallel to each other; double cut files have a second set of ridges cut at an angle to the first set. Double cut files have a more aggressive cut and leave a rougher surface behind. Files with curved ridges are also available but can be harder to find. On some files one or both of the edges are smooth (or safe). This enables you to use them in tight corners without damaging adjoining surfaces. Typically, longer files will have larger and coarser ridges than shorter files. The spacing of these ridges will determine the grade of the file. The closer the ridges are, the finer the cut and the smoother the surface it leaves behind. The four grades are coarse, bastard, second cut and smooth.

There are five basic cross sectional shapes for files: flat (rectangular), square, half round, round and tapered triangular. The tapered triangular files are typically used to sharpen handsaws but I have found they can be quite handy when cleaning up complex crown mouldings and other details on fine furniture.

Rasps are very similar to files, differing primarily in the way the cutting edges are formed. Instead of ridges, a rasp has individually raised teeth. Wood rasps are the coarsest of these and remove material the fastest. Round or half round in cross section with large, regular rows of teeth, they leave a very rough surface behind. Next up the smoothness scale is the cabinet rasp. These are similar to the wood rasp but the radius of the curve is larger and the teeth a little finer. The patternmakers’ rasp is the most popular among woodworkers. It has individually raised teeth distributed in a random pattern across its face. They are much finer than the other two and the random distribution results in a fast cut while still leaving a relatively smooth surface behind.

Files and Rasps of a Different Nature

For detailed work on carvings, cabriole legs, and other finely shaped pieces, the ultimate choice is a set of rifflers. Rifflers are essentially smaller, S-shaped rasps or files, and can have square, rectangular, round, triangular or pointed heads. Also, they can have teeth on one end or on both ends. They come in a myriad of styles and shapes, and can be bought individually or in sets.

If you’ve never used files or rasps before, you can get a 4 way combination file/rasp, (or four-in-hand) which gives you four different shapes and types of cuts. One side is flat, with a rasp cut at one end and a file cut at the other. The other side is round, cut in the same manner.

A modern variation on this concept is the Microplane. These are made from a thin sheet of steel that is pressed into ridges with many perforations. Each of these openings acts as a miniature plane, removing a thin shaving of wood. They are available in several different profiles from flat to round, depending on the manufacturer. These still leave a rough surface behind, but because the teeth on these are wider and staggered, it requires less effort with a cabinet scraper to bring the surface to a final smoothness. Microplane rasps can catch on highly figured wood or any wood that is prone to splinters.

A completely different kind of rasp is the Shinto saw rasp, which originated in Japan. This rasp consists of a series of saw blades waffled together to produce a wide cutting surface. One side has coarse cut teeth for very fast stock removal while the other side has a finer tooth pattern for a smoother cut. They work exceptionally well on highly figured wood.

Files and rasps used on wood or metal will soon clog as the grooves fill with debris. This debris can be easily cleared with a file card, which is nothing more than a short stiff wire brush. The wire on a file card is not as hard as the metal in a file or rasp, so there is no risk of damage to your tool. When not in use, keep your files and rasps stored in a tray with individual slots for each, or store them in a canvas tool roll. They will be damaged if left in the bottom of a toolbox. Keep your files and rasps in a dry environment as rust will attack their thin cutting edges.

Eventually, files and rasps loose their cutting properties. You’ll know it’s time for a replacement when the file or rasp begins to skim over the surface of the wood. While they can’t be re-sharpened, you can re-cycle them into custom chisels. However, don’t use them for turning tools, they are much too brittle. When buying new files or rasps, its best to go with leading brands, such as Nicholson, Bahco and Grobet. Poorly made files will dull prematurely.

Most building supply outlets and hardware stores will also carry a limited selection of the more common types and sizes of files and rasps.