When you think of granite it is likely in the context of the flooring often found in prestigious public and commercial buildings, in fountains, columns, monuments and other public structures. Or you may associate granite in its polished form with kitchen countertops, shower surrounds, fireplaces, or bar tops. But how about table saw tops or jointer fences? 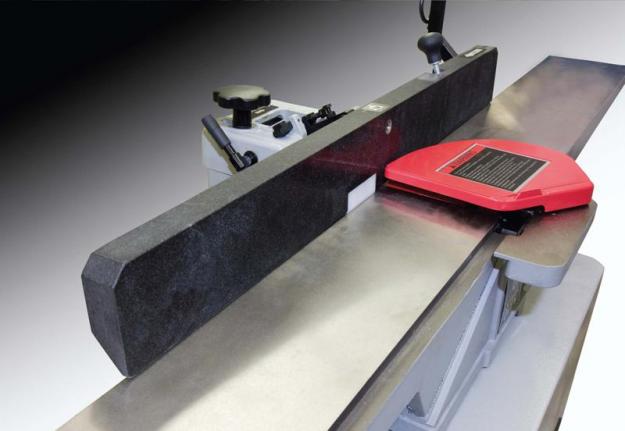 There has been a lot of discussion generated since Steel City Tool Works (normand.ca) recently announced the introduction of granite as an alternative to cast iron for machinery table tops and fences. Clever marketing ploy or brilliant product innovation?

Granite is probably one of the most common rocks on earth, and has been used for thousands of years, primarily as a building product. It’s a type of igneous rock made up of small and large grains of minerals including silicates, feldspar and quartz, and has its origin as molten rock (magma) deep inside the earth. The magma cools either in the earth (as with granite) or after it moves up to the surface as lava. Then after a million or so years of ‘stabilizing’, we dig it out. The granite used by SCTW comes from China.

One of the major defining characteristics of granite is that it is exceptionally stable. Unlike cast iron (or wood for that matter), granite is not affected by changing humidity levels. Water left on a granite surface will have no effect on its dimensional stability. It won’t shrink or swell, and hence won’t warp. It is also largely unaffected by extremes of heat or cold. So, if the surface of a piece of granite is milled flat, it will remain flat. The granite table saw tops from SCTW exhibit less than a .001″ to .002″ variation across their width.

An ancillary characteristic of granite is that it won’t rust – a concern with many woodworkers. If your shop is subject to extremes of temperature or humidity levels, you’ll never have to worry about rust forming on a granite top, or cracking if the shop temperature falls below freezing.

Granite isn’t heavier than cast iron, but the granite table saw tops used by SCTW are 44mm (1.73″) thick, and at 150 pounds, heavier than ribbed cast iron tops. This extra weight is an added advantage in that it absorbs more motor vibration than does a cast iron top. Of course, granite is more brittle than cast iron, so if you hit the edge of a granite top with a hammer it would likely chip. If you whacked the top with a sledge hammer it would crack. Beyond that, a granite top can easily handle the normal dropping and banging that occurs in a shop.

One of the disadvantages is that you won’t be able to use any of your magnetic shop jigs on a granite top. As well, unlike cast iron, you can’t tap into a granite surface to add any jigs or accessories. To attach components underneath the granite table saw tops SCTW drills holes and uses stainless steel inserts set in place with a high tensile epoxy-type adhesive.

In addition to being stable, granite is remarkably scratch resistant. This is one of the main reasons it is so popular in kitchens. Of course, after several years of heavy use a granite top will show evidence of usage, but it will retain its original look much more so than cast iron. SCTW’s introduction of granite tops will only have a marginal effect on the world demand for scrap iron and steel, which is a major component of cast iron, but it does make sound ecological sense. For the user, the benefits of granite over cast iron would seem to be well worth the additional $50 or so that it adds to the purchase price. And to cap it off, the granite tops come with a ten year warranty, which gives some indication of SCTW’s confidence in the product.