Vaughan & Bushnell (Bear Saw) are probably better known for their line of quality hammers. They seem to be the only large US tool company that doesn’t offer a Western style saw. The Shark Corporation (Sharksaw and Takumi) offers a wide range of contemporary and traditional style saws made in Japan. For the past three decades woodworkers seeking the best in Japanese style tools have turned to The Japan Woodworker (Shindo, Kubota and Nakaya). They are also one of the few companies who can competently set and re-sharpen Japanese saws. UM:Kogyo (Silky) have been making saws in Japan since 1919. The majority of their saws are for the landscaping industry.

Japanese saws (noko giri) have become increasingly popular over the past decade. There are also some hybrid saws on the market, which combine the best features of both types of saws: typically a Japanese tooth pattern in a Western backsaw and handle format.

Most resellers offer five kinds of Japanese saws. Ryoba saws have crosscut teeth on one side and rip on the other. The rip teeth are typically smaller towards the handle and become larger toward the front. Dozuki saws have a single edged blade with or without a rigid back and teeth cut rip or crosscut (equivalent to our dovetail or tenon saws). The Azebiki saws are used for cutting mortises, grooves, sliding dovetails and the like. They look like smaller versions of Ryoba, but have convex blades. Finally, there are general purpose saws, Kataba and Kugihiki, a flush cut or dowel saw.

There are a few important differences between Western and Japanese saws.  The most significant is that while you “push” a Western saw into the wood, you “pull” a Japanese saw. This requires an adjustment to your cutting technique. You have to let the saw do the work. Because they are in tension, being pulled taut rather than compressed while cutting, the blade is much less likely to bind or buckle.

Consequently, Japanese saw blades are thinner than Western blades. They have less set, resulting in a narrower kerf, and they use harder steel which makes the teeth more brittle. The small, harder teeth are more difficult to sharpen, and best left to a skilled “metate” (an experienced saw sharpener). You’ll also notice that Japanese saws are appreciably lighter than Western saws of equivalent size.

While virtually all Western saws are machine made, the top end Japanese saws are still made by hand. Expect to pay a premium for these beauties. More conventional Japanese saws are made by a combination of machine and handwork. These saws have impulse-hardened teeth, and a few dispense with the rattan-wrapped handles for plastic or rubber. Japanese hand tools are sold in different grades of steel, with blue steel (Aogami Hagane) being the highest grade. Most of the saws I have seen are made from white steel (Shirogami Hagane), which is their mid-grade. Several manufacturers (including Nakaya) also use Swedish steel.

A quick visual inspection of the blades, teeth, rigid backs and handles of the saws didn’t turn up any deficiencies. I then made a prescribed set of cuts on hardwood and softwood with each saw (flush, tenon, mitre and dovetail as appropriate for the saw). Measurements are shown in inches, and prices in CDN$ (rounded to the nearest dollar and without shipping and taxes; US dollars converted at 1.45).

Dozuki
The cuts made by these three saws were very impressive, whether in hardwood or softwood. The kerfs were narrower and the cuts smoother than any other saws (contrast, for example, the .010” kerf of the Nagaya to the .023” kerf of the Independence Dovetail saw).

These saws are also lighter than Western saws, and have a wonderful feel in the hand. They require a more delicate approach than Western saws; it’s important to let the saw do the work. Trying to rush through a cut can result in the blade wandering or worse, binding on a push stroke. I found that once I scored a line with a knife, these saws followed the kerf nicely, regardless of the angle that I was cutting.

The Shindo (top in photo) is a professional level saw while the Kubota (middle) and Nakaya (bottom) are standard grades. I was surprised that the Nakaya gave both the narrowest kerf and smoothest cut of the three (although the difference was slight).

The handles of the Shindo and Nakaya are particularly nice to hold. If a Japanese style saw is what you have in mind, then you can’t go wrong with one of these.

Ryoba
The Kenzo saw (bottom in photo) is the largest and heaviest of these saws, with the widest kerf and roughest cut. However, it slices through wood rapidly. The taper ground blade, made from high carbon steel, is hard chrome plated. Its rubber compound elastomer handle is very comfortable. For rough cutting timbers this saw does a good job. 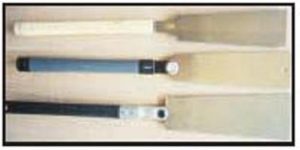 The Vaughan saw (middle) produced an excellent cut. It is lighter than the Kenzo, and has an equally comfortable handle. The Takumi saw (top), made by the Shark Corporation, is a professional-level saw. It is a very light saw and has a comfortable rattan handle. The blade, hollow ground from the cutting edges to the centre and from the hilt to the front edge of the blade, is tensioned and polished by hand. A very sweet saw. All these saws feature replaceable impulse hardened blades.

Kataba
The cuts produced by these saws are noticeably smoother than those of the Western handsaws, general purpose saws, or mitre saws.

The Vaughan saws have spring-steel blades and impulse hardened, triple edge teeth, and a contemporary handle made of a soft comfortable composite. The BS333C (top in photo), with the coarsest teeth, is very fast cutting and would make an ideal saw for preparing rough stock or even for yard work.

The BS265M, with its finer pitch and thinner blade produced a smoother cut. The BC240P has the finest cut and is described by Vaughan as ideal for cutting PVC and ABS plastic piping.

The Nakaya (bottom) features a high carbon Swedish steel blade with impulse hardened teeth and cane-wrapped handles. The kerf is fairly wide, at .035”, but very smooth, certainly comparable to the cuts produced by Western gent saws.

The photo (above right) shows, from left to right, sample cuts made by the Nakaya D-210C, Takumi 10-2710 and the Vaughan BS333C. Although they give smoother and narrower cuts than Western saws they do require that you adopt a different way of sawing, which some people find difficult to do. At the same time they are not as robust as Western saws (the teeth are more brittle and the much thinner blades can be easily bent) and require more careful handling. However, once you get the hang of these saws, they are a real pleasure to use.