Four main advantages
Helical cutter heads are also called journal heads or indexable insert cutter heads. What this means on a technical level is that the cutter head employs a more or less foolproof system for cutter placement. When you change cutters, you are virtually guaranteed correct placement of the cutter in the head. Most cutters used for metal working lathes and milling machines employ this type of system, but to woodworkers it’s largely unknown. This is one of four benefits to woodworkers.

The second advantage of indexable inserts is the fact that they are made of carbide. While carbide knives have long been available for straight knife heads, they are not the best choice of knife for straight knife heads. If you happen to hit a staple, nail, or screw there is a strong chance that you will crack the knife, ruining it. Because a crack through the knife can’t be sharpened out, you are forced to buy a new set of knives, which could be several hundred dollars. Indexable inserts are not unbreakable. They will still chip and crack if you hit metal. However, they are inexpensive, with most inserts ranging from $3–6, making a “chipped tooth” much less painful to the wallet. You can also replace just one insert at any given time, so if you happen to chip one in the middle of a job, you can change that one insert and keep going.

The third advantage of helical cutter heads is a noise reduction. Conventional straight knife cutters take one big bite of wood, three or four times per rotation, when the knife contacts the wood. Helical heads have the inserts staggered around the circumference of the head. Because of this, only one or two inserts, which are usually 1/2″ to 3/4″ in width, are in contact with the material at any time. The result is dramatic. Machine noise can be reduced by as much as 50 percent through the installation of a helical cutter head.

The fourth, and probably most important advantage for woodworkers is the greatly reduced tear-out that these cutter heads produce. While most planers have no problem with straight grained wood, they generally do not produce good results with knots, burls, and figured woods. Helical heads typically produce much smoother finishes on these difficult woods. 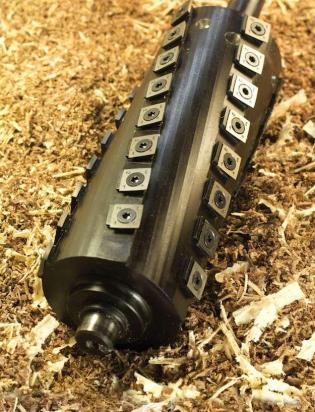 Types of cutter heads available
There are three common types of helical cutter heads available to us today. While this is not an exhaustive list, it will represent 95 percent of what’s available in the market place.
General International offers what they call the “Magnum” cutter head. This system employs double-sided carbide inserts, typically in an arrangement of four rows around the cutter head. General International offers its helical cutter head as standard or optional equipment for all current models of planer and jointer that it carries. “Magnum” inserts are two-sided and about 1-1/4″ wide, which is wider than most inserts used by other manufacturers. Because of this difference, the “Magnum” head uses fewer inserts than a typical competitor’s head. General International’s 15″ Planer (30- 115HC) uses a head with four rows, containing a total of 42 inserts. The “Magnum” cutter head also has an additional shear angle, each cutter is skewed 14° off the axis of the cutter head. 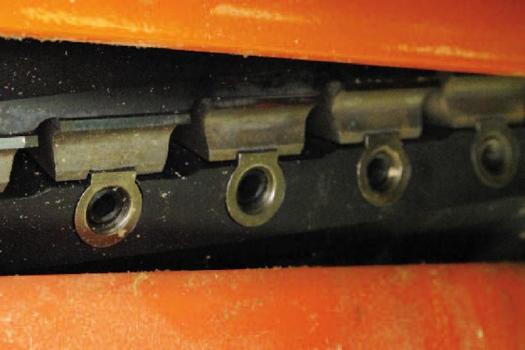 There are several manufacturers using what I call a “generic insert cutter head.” King Canada, Busy Bee, and Grizzly Industrial offer this cutter head as an option on all but a few of their smallest machines. This type of head is characterized with 3/4″ square, four-sided inserts, set typically into four or six rows, spiralling around the head. These inserts are set squarely in the head. King Industrial’s 15″ Planer (KC-390FX) uses a cutter head with four rows, containing a total of 64 inserts. (The total number of inserts varies slightly from manufacturer to manufacturer.) Generic Cutter Head – King Canada, Busy Bee, Grizzly Industrial offer this type of cutter head on most of their planers and jointers. (Photo by King Canada)

Byrd Tool Corporation in Leitchfield, Kentucky offers aftermarket cutter heads for virtually all its machines and also offers custom heads. Its cutter head features their patented “shelix” system. Like the “generic” cutter heads, it uses 3/4″ four-sided carbide inserts, but these inserts are also set at an additional skew angle off the axis of the cutter head. These inserts are also specially ground with a radius to their cutting edge. Because of the skewing of the knife and the design of the cutter head, a slight radius is required to prevent gouging by the leading corner of the knife. Byrd also uses thicker inserts, 2.5mm thick as opposed to most others, which use 1.5mm thick knives. 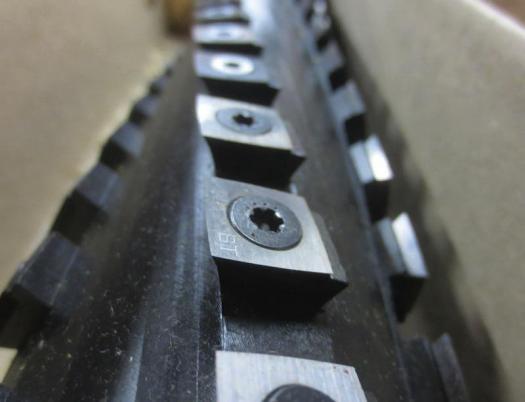 Comparisons
The most important question is simple: What difference does it make? Helical cutter heads are raved about by manufacturers, but are we just being up sold? To answer these questions, I test ran three different machines. I used Busy Bee’s CX15SC representative of the “generic” cutter head, General International’s 30-115HC representative of its “Magnum” cutter head, and Byrd Tools Shelix cutter head, installed in an 8″ jointer (I have assumed for this test that face jointing and thickness planing will yield the same quality of cut.)

At the outset of this article, I mentioned four advantages to helical cutter heads. I have based my comparisons of each head on these four points. HSS knives are notoriously tricky to set in a machine, owing to the fact that they must somehow be adjusted into proper cutting position. Because insert cutters are of a fixed size, and set against some sort of shoulder in the cutter head, their placement is somewhat foolproof.

Both the “generic” and Byrd cutter heads use the same system to hold their cutters in place. Both use a flat-head screw passing through a hole in the middle of the cutter to hold it in place. The “generic” cutter head typically has a three-sided recess in which the cutter seats, while the Byrd cutter head has a single shoulder on the rear of the cutter. With both styles of head, screw torque is critical. Insufficient torque will cause the cutter to come loose, while too much torque will cause the cutter to crack. Byrd Tool specifies that its screws be torqued to 55 in-lbs. This roughly translates into a “firm hand tightening with a screw driver.” Clearly this will have a lot of variation. In my shop test, I firmly hand-tightened a series of screws and then checked each with a torque wrench. My “firm hand tightening” varied by as much as 10 in-lbs. 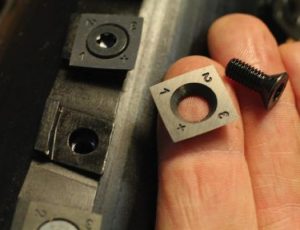 Four-Sided Inserts – You can easily rotate the small knives on the Byrd and generic cutter head if you damage any cutters, or they get dull. Be sure to tighten the cutters with a torque wrench, as they will break if tightened too much. (Photo by Rob Brown) 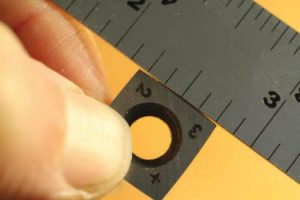 Curved Edges – Each of the four cutting edges on the smaller inserts are curved. This is because the knives are often held at an angle, and the leading edge of each knife would otherwise dig into the wood. (Photo by Rob Brown)

The “Magnum” cutter head holds the cutters differently than most insert heads. The insert in the “Magnum” head is held with a gib and set screw, similar to traditional HSS knife machines. The cutter is registered on two pins to provide positive placement. Screw torque is much less critical on this style of head. Recall that the “Magnum” head also uses fewer inserts than most other heads. This means that the time required to change all the knives is significantly less. When it comes time to buy new inserts, you’ll be buying fewer. But remember, they are only two-sided, not four-sided, so you will buy them twice as often. Also note the special screw with both right- and left-hand threads. Don’t drop one in the sawdust, because you won’t find these at the local hardware store. Gib and Set Screw – The Magnum cutter uses a gib and set screw to secure each knife (above). The set screw isn’t found at your local hardware store, so make sure to keep track of them when changing the knives on this cutter (below). 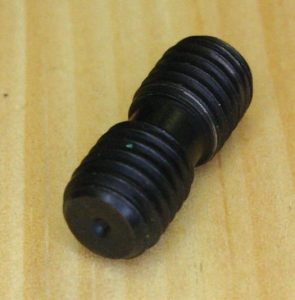 The second advantage I mentioned was the fact that these inserts are all carbide. While there are variations in the type or grade of carbide used in different cutter heads, all three of the helical heads we tested used German-made carbide inserts. All these inserts came in suspiciously similar packaging, even though their size varied slightly.

The third advantage I mentioned was noise reduction. While testing Busy Bee’s CX15SC, I was also able to run the same board through their CX15. The difference between these two models is strictly the cutter head. Decibel readings of the CX15 were around 99-101dB, while the CX15SC ran around 90-92dB. Both were measured while cutting. The machines are virtually the same at idle. This also includes the background noise of a 1.5HP dust collector. With a difference of around 8dB, that’s fairly significant. Decibels are measured on a logarithmic scale. This means that for an increase of 10dB, the sound feels like it is 10 times as loud. Less machine noise will require less capable hearing protection. The sound will also carry less distance, reducing the chances of noise complaints from neighbours or family.

The fourth advantage, and probably the largest advantage for woodworkers, is the reduced tear-out. I ran both moderately curly maple boards, and knotty/crotch grain walnut boards through all three machines. While all three machines had significantly less tear-out than a straight-knife machine, they did not differ significantly from one another. This surprised me.

It seems that the major reason for reduced tear-out is the sharpness of the cutter. HSS knives will produce fairly good results when freshly sharpened. However, HSS quickly loses its sharp edge, while carbide inserts will stay sharp significantly longer. This may be the reason why they are able to provide tear-out-free cuts. While testing the two machines at Busy Bee, it was difficult to tell which board had been planed with the helical head, and which one had been planed with the HSS knives. The board that was run through the HSS knife machine showed only very slight tear-out. However, this was a brand new machine with sharp knives.

Conclusion
Is it worth buying a helical cutter head? In my opinion, yes. As mentioned, there are four distinct and measurable advantages; reduced operating noise, reduced tear-out, and carbide knives with simplified replacement. If you work with hard, knife dulling, or figured woods, you may need to change your knives 5–10 times less often.

Which one is the best to buy?
I have owned a Byrd cutter head for about eight years now. At the time I purchased it, there were not a lot of other options out there. After witnessing the results of the other heads, I have to admit that they produce results almost indistinguishable from the Byrd head. The “Magnum” head from General International is especially intriguing as it requires much less time to swap all the cutters. Your choice of which one to purchase may revolve around availability more than anything. If you are purchasing a new machine, buying the cutter head already installed from the factory is a simple plug-and-play solution. If you already own a machine, you may very well be able to purchase a new cutter head from the machine manufacturer to fit your machine.

Editor’s Note: We chose not to include the Felder ‘Silent Power’ cutterhead in our review, as the cutterhead is only available as an option at the time of purchase for a new Felder machine, while all the cutterheads reviewed in this article can be installed as a retrofit for older machines.

Do you think a helical cutterhead is worth it? Do you have one on your wish list? Join the discussion in the comments section at the end of this article.