I got a chance recently to take the Laguna Revo 12|16 lathe for a test spin, and it has a number of good features going for it. There are a lot of little details on the machine that make it stand out to me in the category of bench top lathes. Everything about it is beefy. All the castings are nice and thick, and the top of the bed was very wide. This will help the banjo and tailstock lock in place firmly and not slide given the amount of friction on such a wide surface. The finish was not ground, but somewhat textured, and this also increases the grip between the bed and the banjo and tailstock. The tailstock has a holder for a couple of dif­ferent centers, which is handy. I liked the feel of the banjo and tailstock sliding on the bed, and the smoothness of the locking levers. Placing a live center in the tailstock and a drive in the head­stock, I slid the tailstock up to check the alignment between the two centers and I was glad to see that they were perfectly in line on this machine. It’s common to see centers not line up on some of the thriftier machines out there. 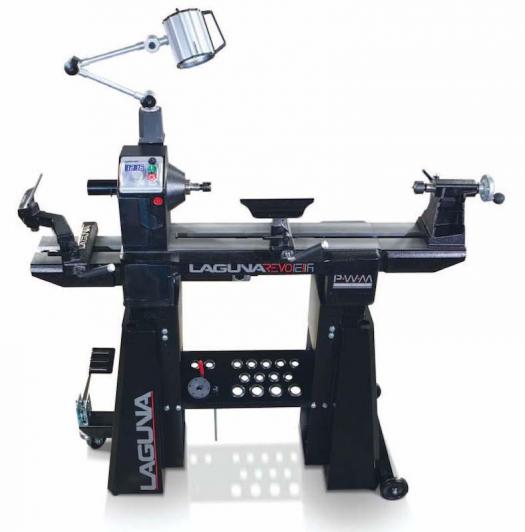 The headstock has a tapered nose like Laguna’s larger floor model machine, which allows the spindle to stick out quite a bit and give good access to the headstock side of a turning. There are easy to open doors for the belt compartment and a quick release tension lever which makes changing speed ranges quick and easy. I also liked that there was a window on the end of the head­stock which allows the operator to see the index position numbers engraved on the pulley inside. The controls for switching the unit on and adjusting speed are located conveniently on the top of the headstock. The buttons and knobs are large, and the speed display is easy to read. The stand has a number of spots to store your lathe chisels close at hand.

Overall, I like the drive system used on the Laguna lathe. They use a fairly wide serpentine belt. Serpentine belts transmit power much more efficiently and smoothly than a conventional V-Belt which also helps the lathe run quieter. The lathe was very quiet run­ning. With a small piece fixed between centers, you could hardly hear the machine when I was not cutting wood. The machine has a fair bit of weight to it, which is very beneficial. I fixed a piece of oak about 3″ square and 12″ long between centers, and had it off center about 3/4″. I was surprised I could run the machine between 750-1000 RPM and there was very little vibration. I rounded out a few pieces like this with a 3/4″ roughing gouge and then planed them smooth with a skew chisel. Using moderate cuts, I had no issues with the power of the machine, but I did find that a heavy cut would start to slow the machine a bit. Compared to other machines that are this size, I would say it is more powerful. Even though many bench top lathes are using a 1HP DC motor these days, Laguna uses different electronics for their machine, giving a better torque characteristic and lower speed range. At low speed the lathe still had lots of torque. Most machines start to loose signifi­cant amounts of torque in the bottom 25% of the speed range. It’s still designed as a bench top machine of course, so it wouldn’t be fair to expect it to have the power of a full size machine.

There are a couple of small points with the lathe that I did not like. The window for the indexing numbers is nice, but the numbers are upside down if you stand in the normal operator position. When first using the machine I also found that the tool rest would pivot when I was working on the outer ends. I did find this problem went away when I tightened the lock handle significantly more, but I was tightening the handle to a point that I would be concerned about breaking it in time. The Laguna banjo uses a large boss with a split, and the lock handle squeezes the split closed rather than the end of the lock handle driving right into the tool rest post like most lathes. Before running the machine, I expected that this system would have a better grip on the tool post as it contracts pressure evenly around the post, but in the end I found that I had to tighten the handle more than I would with other machines where the end of the lock handle simply drives right into the tool post. Neither of these problems is a deal breaker in my opinion. The Revo also has a fairly short dis­tance between centers, at 15-1/2″ it is one of the shorter machines out there, but on the positive side it is one of the few bench top lathes that can turn on the outboard end of the headstock, allowing you to turn up to a 16″ bowl with the optional outboard tool rest and bed extension. The same bed extension can also be used on the other end of the lathe to increase the distance between centers.