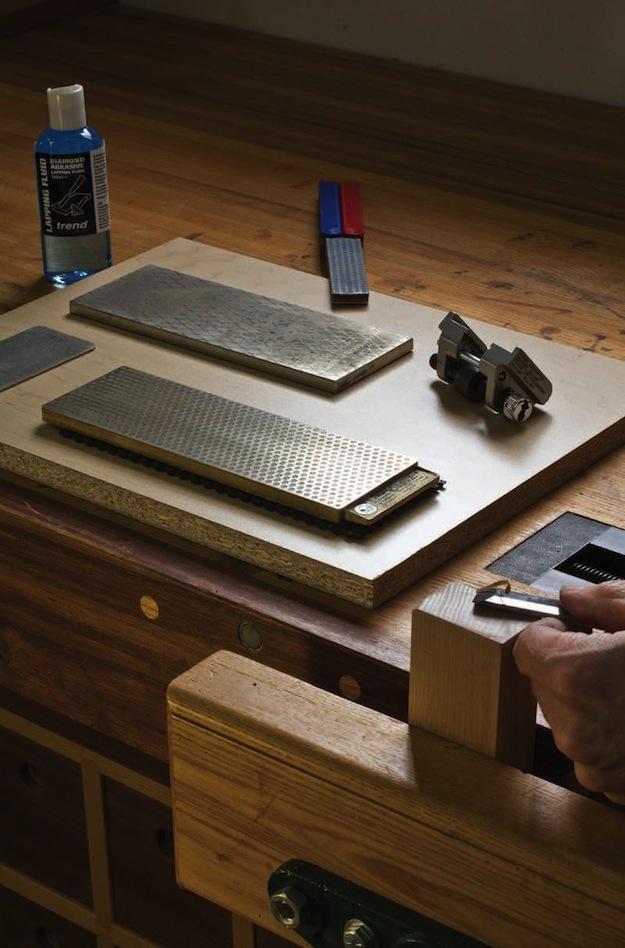 What’s in a name?

Novice woodworkers are often baffled by the difference between sharpening and honing. Essentially, they are two sides of the same coin. Sharpening is what we do to remove nicks or chips from a cutting edge, to re-establish the original bevel angle, or to change the bevel angle. If you need to restore an edge or change a bevel angle, it’s much quicker to use a powered sharpener as they remove material quicker. However, to remove small nicks and scratches you can go straight to a bench stone, start­ing with a coarse grit (in the 45 micron range) and finishing with a finer grit (in the 25 to 15 micron range). Depending on the type of work you’re doing, the cutting tool might be sharp enough at this stage. The sharpened edge will not pare end grain very well at all, but if you’re working with the grain you may have some luck. Try the edge and see how it performs. If you feel you need a sharper edge you can continue to hone the blade further with different stones.

Most of the time you’ll want a super-sharp cutting edge, as you’ll get crisper and cleaner surfaces. This is where honing, which has more to do with enhancing and maintaining an already sharp edge, comes in. Honing is accom­plished on finer stones (around 9 micron or smaller) often followed by stropping with some kind of polishing compound. In fact, most of the time, when your cut­ting tools get dull, all you need to do is hone them. This removes small scratches from the cutting edge that occur during regular use. In the end, it really doesn’t matter how you refer to the process – what does matter is that you get the results you want.

One of the major reasons I like dia­mond stones is that they are so durable. Drop a diamond stone onto a concrete floor, or drop something on top of the stone, and it’s very unlikely to break. The same can’t be said for water or oil stones. Neither do I have to worry about damaging the surface of the stone by inadvertently digging into it with the tip or cutting edge of a tool, or chipping an edge by knocking it with a tool. And, best of all, they’ll never dish out.
Diamond stones also cut very fast. In my experience they cut faster than water stones of an equivalent grit. Use them not only with tools made of high-speed steel, but tungsten carbide tools as well. Ultimately this means you can sharpen more types of materials and get back to your work sooner.

The amount of use a stone gets will influence how long it lasts, but they do last a long time. My current set gets used on average every second week, and four and a half years on, they continue to cut wonderfully. A long service life makes them very economical, even though they typically cost more up-front than water stones.

Diamond stones are also virtually maintenance-free. While you can use them without a lubricant, I typically use water. You could also use a lapping fluid specifically designed for diamond stones, which serves the same purpose as water, but won’t rust the metal substrate. I don’t use products like WD40 and mineral oil as they have too high a viscosity, and actually cause you to use more pressure than is necessary. After using the stone I simply wipe it clean and dry. Occasionally you’ll get some gunk build-up on the surface, which you can easily remove with a polymer eraser.

What stones to choose?

Diamond stones have been on the market for quite some time, with three major brands dominating the field – DMT, Trend, and M-Power. Each offers a range of products and price points.

All three of these manufacturers use mono­crystalline diamonds, which are comprised of single crystals. Some diamond sharpening products are made with polycrystalline diamonds that consist of multiple particle crystals. These, apparently, have a ten­dency to break down more readily than mono­crystalline diamonds.
Diamond bench stones are available single-sided or double-sided. The double-sided stones have a different grit on either side. Some have a non-continuous surface – a series of recesses (small round depressions or narrow channels), which serve to collect the swarf produced during the sharpening process. Other stones have a continuous diamond surface that tends to work better with narrow or pointed tools, which might get caught in the recesses.

The stones come in sizes comparable to water stones, including 2 × 6″, 3 × 8″, 4 × 10″, and 3 × 12″. The stones are available in grits from 180 (70 micron), the coarsest, up to 8000 (3 micron) the finest.
Most companies also offer a range of other diamond sharp­ening formats for other cutting tools such as knives, gouges, carving tools, router bits and insert bits. Formats include credit-card-sized plates, rectangular files, tapered files and tapered cones.

Get practical: a simplified sharpening system

Over the past couple of decades I’ve tried all manner of sharp­ening techniques. While I’ve been able to get good results from most of them, I inevitably settled on a three-part sharpening system, with diamond bench stones at the core. I use a Trend stone that is coarse (300-grit/50 micron) on one side and fine (1000-grit/15 micron) on the other side, and a single-sided extra-extra fine DMT stone (8000-grit/3 micron).

I supplement the diamond stones with a Tormek power grinder when I need to re-establish a bevel angle, and 3M micro-abrasive adhesive-backed film (.5 micron) for final honing. I attach the 3M film to plate glass.
Regardless of whether you get single- or double-sided, continuous or non-continuous surface stones, you’ll want to include at least three grits in your sharpening setup: coarse, medium, and fine. If you feel the need for something even finer at the end of the first three steps, you can add a super-fine grit to your process.

A coarse grit diamond stone makes quick work of the back of a chisel or blade, especially if, like me, you only flatten 3/4″ or so back from the cutting edge. A bit of time with a medium grit will make the back look nice, and a tad more time with a fine grit stone will make it look splendid.

Because I use a Tormek grinder my cutting blades are hollow ground. This means there are only two contact points to hone, rather than the full surface of the bevel, as you would need to do for a flat-ground blade. Honing is considerably quicker. The only times I use the Tormek are when I need to reform the existing bevel or if the tip of a tool gets damaged. After grind­ing I usually go straight to the 1000-grit stone and only make enough strokes to remove the scratch pattern at the tip of the edge left by the grinding wheel.

I then move to the 8000-grit, again only taking enough strokes to establish the bevel. Finally, I take half a dozen or so long strokes on the 3M abrasive film.

When I feel the edge becoming somewhat dull, I go back to the 8000-grit stone first, and then the abrasive film. With a bit of experience you’ll be able to judge whether you can sufficiently hone the blade on your finest stone or if you need to drop back to your medium stone.

If you’re new to the craft of woodworking, or feel uncom­fortable with the process of sharpening, I recommend that you use a honing guide. This guarantees the bevel will be flat. Establishing a consistent bevel-angle freehand can be difficult as it’s all too easy to rock the tool and round over the bevel. However, you can dispense with the guide when doing the final polishing on the 3M film if you wish. A vise-type honing guide works reasonably well, although if you’ve a wide range of cutting tools with various angles, or flat-grind your tools with a secondary micro-bevel, then the Veritas Mk II is the bet­ter choice. It takes all the guesswork out of sharpening and ensures perfectly consistent results.
The kind of work you do, how meticulously you do the work, and how quickly you want to get back to work, all have an impact on your conception of how sharp your tools need to be, and how much effort you’ll be willing to put into your sharpening. If you are look­ing to maximize the time you spend working wood and minimize the time spent keeping tools sharp, then diamond sharpening might just be the way to go.