A while ago a friend of mine purchased an inexpensive copy of a Stanley #4 Bailey. The new plane looked pretty good but had one serious drawback: it couldn’t plane wood. With great effort you might gouge a chunk out of a plank, but that so-called hand plane could not produce anything resembling a shaving.

That’s the unfortunate first experience many woodworkers have with a hand plane, and for some it’s their last. They put down the tool and pick up the sand­paper. Yet this need not be the case. An inexpensive plane is a good tool that, in most cases, just needs clean-up, adjust­ment, sharpening and tuning.

Now, I won’t claim that you can turn a rusted, cracked piece of garage-sale junk into a precision instrument. But if you start with something basically sound, an afternoon’s effort can turn it into a good tool that will provide excellent service. So here’s how to transform that sow’s ear rusting at the bottom of your toolbox into a silk purse that’s a joy to use.

In this article I’ll discuss a Bailey-type metal plane, since this style is one of the most commonly available today. There are many other types of planes available and the concepts in this article can be easily used with them. 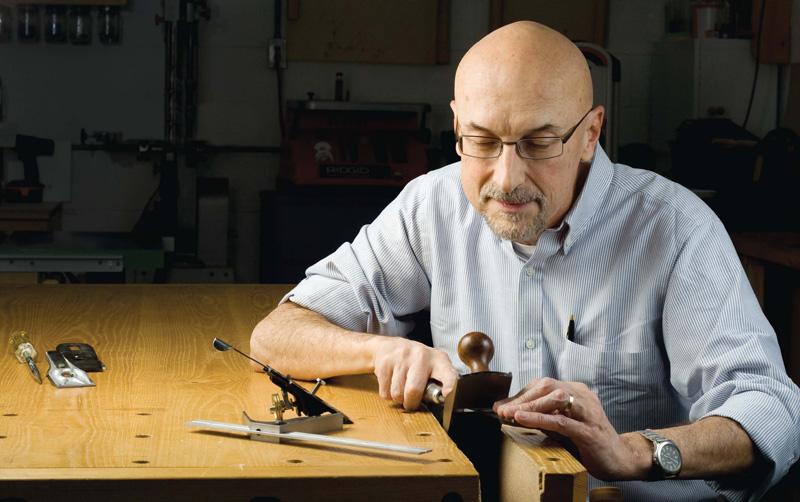 Disassemble the plane completely. On a new plane, clean off protective coat­ings (oil, grease, lacquer); on an older tool, grease, resin and rust. This will require the proper solvents, a wire brush and possi­bly an abrasive block to remove rust. With a good quality older plane whose finish is in poor condition, you might want to consider stripping off the old paint and repainting. A rust inhibiting paint would be a good choice. 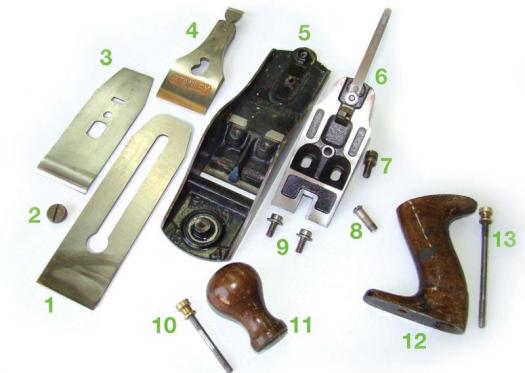 This is the dreariest part of the job, yet flattening the sole will improve the plane’s performance dramatically.

You can use silicon carbide abrasive paper or loose silicon carbide grit (90X) to perform the task. A machinist’s gran­ite surface plate or a piece of 3/8″ thick float or plate glass will provide a flat sur­face for silicon-carbide abrasive sheets. Using this method, you can stick down a few different grades to your surface plate or glass and work from one grit to the next.

A bit of spray-on adhesive on the glass will stick the paper down, and a few spritzes of water on top of the paper will lubricate it and wash away slurry as the metal is abraded. To lap the sole, install the plane’s blade, chipbreaker and cap iron. Tension these to approximate nor­mal usage, but back the blade off so its edge is retracted well into the plane’s mouth, out of harm’s way.

Start with 100-grit paper (or 90X silicon carbide grit) unless the plane’s body is in bad shape, in which case you might start with 60-grit. Work through successively finer abrasives with a back-and-forth stroke alternated with a figure-eight pattern.

Each finer grit will polish out the previous grit’s scratches. You’ll want to work through at least 320-grit paper, but can move right through 600-grit if you’re still feeling in need of exercise.

You can watch your progress by mark­ing a few lines across the sole with a felt-tip marker and watching how they are abraded. Critical spots to watch are the toe and heel, and the areas around the mouth. When the lines in these loca­tions wear away, ease the edges of the sole with a fine file or abrasive paper to remove any sharp edges or burrs, and you’re ready to move on.

Flatten and Adjust the Frog

The frog is a casting that supports the blade on the plane body and allows for back-and-forth and side-to-side adjust­ment. Poor contact with either the plane body or the blade results in vibration called chatter, so this component must be flattened and fitted as precisely as possible.

On a Bailey-style plane, the lower sur­face of the frog contacts the plane’s body at four points. These points must be flat and make the fullest possible contact to minimize chatter. The first step is to check the contact points on the plane’s body, remove any paint or dirt that may interfere with a flush fit, and if nec­essary, scrape these areas flat with an engineer’s scraper. If you don’t have an engineer’s scraper you can make one by grinding an old file so that it is slightly concave along the last inch or so of the flat sides, and the end where the scraping takes place has a slightly convex profile.

Once scraped, the fit of these areas can be fine-tuned by placing a bit of 180- or 220-grit silicon carbide and a drop of water onto them and then lapping them flat, leaving a dull gray surface.

The upper surface of the frog contacts the blade, so it must be flattened as well. This can be done by grinding it on a piece of 220-grit wet-or-dry paper stuck to a flat surface such as glass. Again, you can judge your progress with lines from the felt-tip marker as you did on the plane’s sole.

You want the sole of the plane to sup­port the fibres of the wood being planed as closely as possible to the point where they are being severed by the blade. This will minimize tear-out. You also want enough clearance in the mouth and throat of the plane so that shavings can pass through freely without clogging. Use a mill file to refine the throat. To prepare for filing, mark the sole around the mouth with a felt-tip pen, then scribe a line through the ink, square across the sole, as close to the existing mouth as possible. Then gently clamp the plane’s body almost vertically in a vise, angled back towards you about 15°. Keep the file parallel to the top of the vise then carefully file the plane’s mouth so its front edge is square across the sole, just meeting the line you scribed. 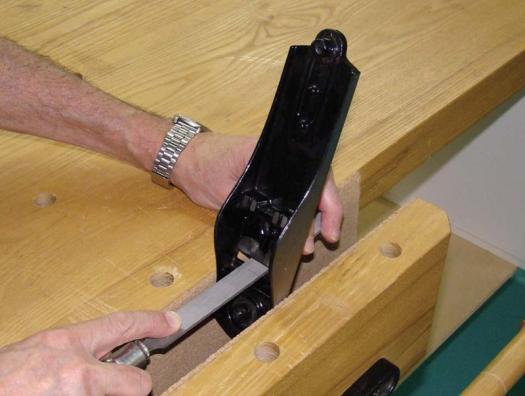 Hone and Fit the Chip Breaker

On inexpensive planes, the front edge of the chip breaker as it comes from the factory seldom makes good contact with the blade. This can allow shavings to jam between them, clogging the mouth of the plane. To prevent this, the underside of the chip breaker must be reshaped to make perfect contact with the blade. Do this by slightly bevelling the bottom edge of the chipbreaker using a diamond stone or 220- or 320-grit wet-or-dry paper. Once honed, no light should show through the edge where the chipbreaker meets the blade.

Next, the top of the chipbreaker should be shaped and refined. This can be done on a 400-grit stone either free­hand or by using a honing guide, and then finished with a fine abrasive sheet. The idea is to blend the top of the chip-breaker into a smooth and polished surface over which wood shavings can slide without friction.

The underside of the lever cap, where it contacts the chip breaker, is often rough with a sand-cast finish. As with other parts of the plane, this should be smoothed so it and the chipbreaker make firm and even contact. Fortunately, after the labour of flattening the plane’s sole and other components, this last bit of metalwork goes fairly quickly.

The difference in performance between a plane blade from the factory and a high quality aftermarket blade can be a revelation. It may cost $40 for an A2 tool steel or high-carbon steel blade from Veritas, Lie-Nielsen or Hock Tools but the improvement is more than worth it. This is partly because the replace­ment blades are thicker and therefore less susceptible to chatter and vibration, but is also due to the superior steel and forging techniques employed in their manufacture.

Should you opt for a replacement blade you must choose the type of steel. A2 blades (whether cryogenically treated or not) are tempered slightly harder, hold an edge a bit longer, but also take more time to sharpen. High-carbon steel such as O1 appears to take an even keener edge than A2, with the trade-off being slightly more frequent sharpening.

If you are refurbishing an older plane and the blade is rusted, pitted or bent, replace it. But if the blade you have is in good shape, it’s probably worth the time to sharpen and see how it performs (see ‘Preparing Plane Irons,’ Apr/May 2009, Issue #59).

The frog supports the blade and is held in place by two screws, which thread into the plane’s body cast­ing. Elongated slots in the frog and an adjustment screw allow for back­and-forth positioning to set the mouth opening. A narrow mouth opening is used for fine planing whereas a wider opening is better for coarse work, allow­ing room for heavier shavings to clear. To set this opening, assemble the blade, chipbreaker and screw so that the front edge of the chip breaker is about 1/16″ behind the blade’s cutting edge. Place the frog in position on the plane’s body and then position the blade and chip-breaker on the frog.

Check the width of the opening between the blade and the plane’s mouth. Use the adjustment screw to position the frog until you are satisfied and then gradually tighten the screws holding it in place. Recheck the setup, adjust again as necessary, and tighten it down.

One drawback of the Bailey design is that the further forward the frog is set, the more its leading edge projects into the plane’s throat opening without sup­port. This increases the likelihood of blade chatter. The Stanley Bed Rock design adopted by Lie-Nielsen pro­vides more stable blade support than the Bailey. The innovative Veritas design with its Norris-style adjuster takes this a step further. Its frog can be adjusted with the blade and lever cap in place, at the same time supporting the blade right down to the plane’s sole.

Replace the front knob and rear tote (handle) of the plane, ensuring they seat securely against the body. This is a good time to buy or make a new knob and tote to replace the cheap plastic ones that may have come with the plane, to repair damaged handles on an older plane, or to make your own custom handles tai­lored to fit your hands.

Finally, place the blade, chipbreaker and lever cap in position on the frog, center the blade in the plane’s throat opening, and tighten down the lever cap. As you do this, adjust the lever cap screw in or out so that the cap is snug – but not overly tight – against the chipbreaker when the lever is depressed.

Now you are ready to use your plane. For a refresher on getting your plane cut­ting well see ‘Smoothing Planes,’ Jun/ Jul 2009, Issue #60. As you use your plane, you will soon become sensitive to the feedback it gives you: Is the cut smooth? How does the plane sound as it cuts? Can I feel any changes in the grain? Should I skew the angle of cut? Am I fighting the wood? Do I need to sharpen or hone the blade?

The plane will tell you all these things and soon become something of an extension of yourself as you work. It will finish wood surfaces with a clarity and iridescence that leaves sandpaper in the dust. It is a quiet, almost effortless, pleasure to use. If you’ve never used a properly tuned and sharpened hand plane before, a reve­lation awaits you.