The drill I use for making furniture on a daily basis is a Milwaukee 12V 2401-20. I’ve used it for the past eight years or so, and it’s still going strong. I only do a small number of home improvement tasks, but spend a lot of time in my studio building custom fur­niture. I find it’s balanced nicely, is very comfortable to use, can be maneuvered upside down and in tight areas with ease, and has enough power and torque for the vast majority of furniture con­struction tasks. 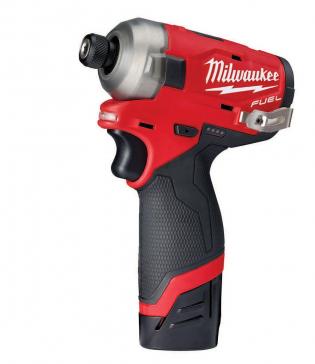 Drills have come a long way in the past eight years, and impact drivers are also slightly different beasts. The thought of using a loud impact driver in my (relatively) quiet shop didn’t sound too sooth­ing, but I was also keen to learn what I was missing out on. Using Milwaukee’s Surge for a few days made me realize I should free up a place on my drill storage rack for a small impact driver.

My first impression – right out of the box, just holding it in my hand – is that it feels very similar to my old Milwaukee drill, though it’s a bit heavier. This added weight won’t be a problem, as it’s far from being a heavy driver. It’s a fair bit shorter than my old 12V drill, tip to tail, and that will certainly come in handy from time to time to get into tight areas for both furniture making and home improvement applications. The Surge is 5-1/8″ from the end of the chuck to the rear of the driver. Overall, it’s well balanced and, turning it upside down or driving screws on an angle, feels very comfortable.

Next, I installed a driver bit to see how it performs. The chuck allowed me to simply press a 1/4″ hex accessory into place and pull the trigger. Many 1/4″ hex chucks need to have the collar pulled forward in order to allow a bit to be installed, but this system is much easier. There are four settings on the upper back of the body. Milwaukee calls this “Drive Control.” There are three levels for speed / power and a fourth mode for driving self-tapping screws. This fourth mode protects the user from overdriving and stripping screws when working metal studs, or similar applications.

Now, to put it to work. I reached for a handful of #10 x 2-1/2″ long flat head screws, and drove them into the side grain of 8/4 red oak. This driver could sink these large screws on the highest setting, though I wouldn’t say it accomplished the job quickly. If speed is of utmost importance, a larger 18V version is your answer. Having said that, the Surge wasn’t slow and it got the task done nicely. It takes a surprising amount of torque to drive screws this size into this dense hardwood, so I was pretty impressed with the results. The brushless motor will transfer lots of power to the chuck, and will do so well into the future.

As far as filling my studio with noise, it wasn’t as loud as I thought it was going to be. I didn’t feel an immediate need to reach for hearing protection, though if I were going to use this driver to sink a hundred large screws, I think I might. Impact drivers are fairly loud, but this new-generation version doesn’t have metal-on-metal contact when it comes to the percussive aspect of the driver. Some new models (this Surge included) use fluid and its hydraulic properties to reduce the noise, yet still provide strong force to drive large fasteners. “Fluid-Drive,” the Milwaukee label for this technology, is the difference between the need for hearing protection to drive a dozen screws, and not. In my mind, this is a game changer. Whether you’re doing an interior residential or commercial installation with people nearby, or are in a shop all alone, this is a nice fea­ture to have.

The bottom line is that as long as you don’t want to drive a lot of massive fasteners, I think you may have found yourself an impact driver. I know I have.