Home Know Your Tools Accessories Next Generation Batteries: What Manufacturers Are Doing to Enhance User Productivity

Next Generation Batteries: What Manufacturers Are Doing to Enhance User Productivity

There has been a lot of innovation in the cordless power tool sector in recent years. We recap the recent developments that strive to bring more power, longer run time, faster charging, and greater convenience to the workshop and jobsite.

There seems to be a never-ending demand from users, and a corresponding drive among manufacturers, to increase both power and run time, not only to increase efficiency and productivity, but also to bring a wider range of corded tools into the cordless domain.

To do this, manufacturers focus on a range of components that make up the typical cordless tool – motors, batteries, chargers, and the digital controllers that enable these components to communicate with each other – along with Bluetooth wireless technology to make it easier to manage your power tool investment using your smartphone or tablet.

All these components work in tandem to deliver every last ounce of power and minute of run time. The technology around brushless motors and digital controllers seems to have leveled off over the past few years, while batteries and chargers have been the focus of the most recent developments. Manufacturers have pretty well settled on 18V (Volt) as the standard for power tools, along with 12V for compact and lower-power-demand tools, and 36V for some outdoor gardening and landscaping tools. Only a year or so ago they introduced a new crop of 18V 6.0 Ah (Amp-hour) batteries to market. These 6.0 Ah batteries offer a significant increase in both power and run time over 4.0 and 5.0 Ah batteries. Makita’s BL1860B 6.0 Ah battery, for example, delivers 108 Wh (Watt-hours) of battery capacity, with a 50% and 20% increase over their 4.0 and 5.0 Ah batteries, respectively. Festool’s 6.2 Ah battery, part of their new Airstream line, has a 111.6 Wh capacity, a 20% increase over the 93.6 Wh capacity of their 5.2 Ah battery. For those of us who use power tools intermittently throughout the work day, 6.0 Ah batteries can provide all the power and run-time we need.

However, these 6.0 Ah batteries still don’t provide enough power for high-draw tools such as SDS rotary drills, grinders, mitre saws and contractor-style table saws, nor do they provide the run time needed in shops and on jobsites where tools are used on a more continuous basis.

Milwaukee and DeWalt have responded to these needs by introducing mega-size 9.0 Ah batteries. Both the Milwaukee High Demand 48-011-1890 and the DeWalt Flexvolt DCB609 are made up of 15 3.6V cells. Each provides an impressive 162 Wh of battery capacity. Both batteries are backwards compatible; they can be used with all the power tools each company has on offer.

The trade-off to more power and a longer run time is a larger, heavier battery. There’s likely a practical limit to how large and heavy battery packs can get, so it’s somewhat doubtful that a 12.0 Ah battery, which would require 20 individual cells, will hit the market anytime soon. However, if companies can increase battery cell density without compromising size and weight then who knows what will happen? 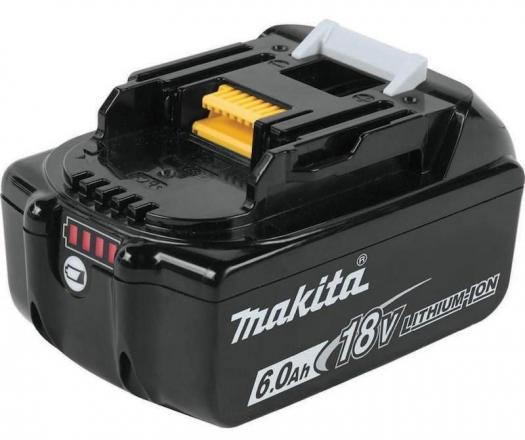 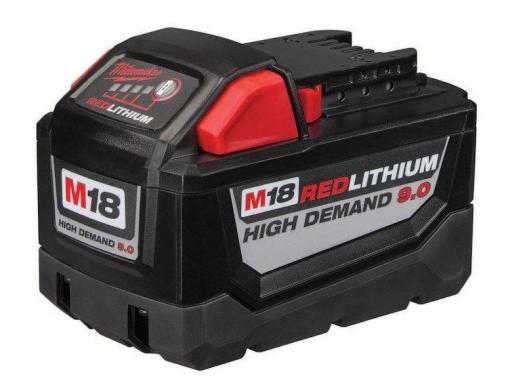 These new batteries consist of 15 cells wired in two ways. Three sets of five cells are wired in parallel to deliver 6.0 and 9.0 Ah of run time, respectively. As well, all 15 cells are wired in series, to provide 54V (60V MAX) of power. When the batteries draw power in series, they deliver 2.0 and 3.0 Ah of run-time respectively. The battery works in tandem with the tool to deliver the voltage required – a lower voltage but higher run-time for power tools that run on 18V (the existing line of 20V MAX tools), and a higher voltage with a shorter run-time for DeWalt’s new line of power tools that run on 54V (60V MAX).

For tools that require even more power (such as the DeWalt 12″ Sliding Miter Saw), two of these Flexvolt batteries can be used simultaneously to deliver 108V (120V MAX) of power. It offers the prospect of cutting the power cord on a range of benchtop machines such as mortisers, drill presses, and belt/disc sanders. 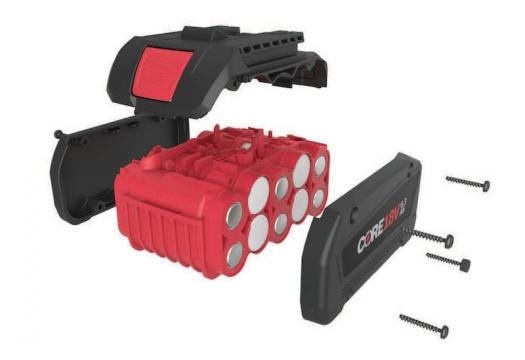 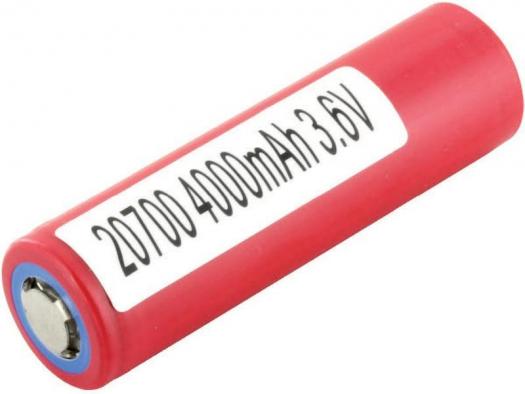 Bosch seems to be the only company involved in wireless charging. With the WC18CF-102 charger you don’t need to remove the battery from the power tool, you simply place the tool on the charger when the tool is not in use, which has the effect of incrementally charging the battery, and saves you the hassle of regularly removing/reinstalling the battery. However, it doesn’t work with existing Bosch 18V batteries, only with wireless-ready batteries, and currently there are only 2.0 Ah slim pack and 4.0 Ah fat pack batteries. The technology is similar to what’s used for wireless phone chargers. Current is transmitted via an alternating magnetic field from a coil in the charger to a coil in the battery. A full battery recharge takes about the same time as a standard charger. The greatest beneficiaries for this technology will be production shops and assembly lines where power tools are used on a constant basis throughout the workday.

Excessive heat is an issue that affects more than just motor performance – it can have a real impact on both the durability and performance of batteries, particularly for the newer crop of 6.0 and 9.0 Ah long-runtime batteries. Companies strive to limit heat buildup during charging and discharging. They use digital controllers to monitor battery temperature as well as charge and discharge rates so that the batteries can be shut off before overheating occurs. Here is what three companies are doing to cool their batteries.

Festool has its own fan-assisted cooling charger, though it’s more elaborate than the DeWalt charger. The Airstream SCA-8 is an 8-amp quick charger that works by pulling air through intakes on the battery, channeling the airflow through the battery cells, and then exhausting the hot air through vents in the charger. Festool claims that this reduces charging time by 60%. Currently there are three 18V Airstream batteries: 3.1 Ah, 5.1 Ah, and 6.2 Ah.

Bosch has taken a different approach with its new CoolPack 2.0 technology, featured in their CORE18V 6.3 Ah Battery, by cooling the battery while it’s in use. CoolPack 2.0 batteries have a high-density polyethylene (HDPE) casing that surrounds the battery cells and helps transfer heat to the outer surface of the casing where cooling fins dissipate the heat. An added benefit of HDPE is that it helps reduce overall battery weight and electrically insulates the battery.

When you only have a handful of power tools and batteries on the go, it’s relatively easy to keep track of them. But what about the renovator who might have a dozen or more, or the contractor with three or four dozen (or more!) tools and batteries kicking around? Two of the major tool companies are integrating wireless mobile technology into batteries and power tools, enabling users to better manage their product inventory.

DeWalt’s Tool Connect mobile app enables you to use your Smartphone to connect and control DeWalt Bluetooth (BT) enabled 18V batteries. Currently DeWalt offers 2.0, 4.0, and 5.0 Ah BT batteries. With the app, users can receive alerts when the battery is in need of charging, is finished charging, begins to overheat, or when the battery is removed a predetermined distance from a specified area.

The Milwaukee One-Key also uses BT connectivity, but unlike DeWalt, it integrates its technology into their power tools. At last count there were 16 BT-enabled power tools available. Users can track the location of Milwaukee One-Key-enabled tools within 100′ of a smartphone. They can also organize and catalogue tools (including non-Milwaukee tools), and even custom control some functions of One-Key-enabled tools.

All battery packs are made up of individual battery cells. Each cell has a specific voltage (V), which is the amount of power it produces. Cells in lithium-ion batteries used for power tools typically have a nominal voltage of 3.6V. Manufacturers have settled on two battery platforms: they wire three cells together in parallel to make up a 12V battery pack, and five cells for an 18V pack. Some companies refer to 18V battery packs as 20V MAX. This is because lithium-ion cells have a maximum voltage of 4.0V without a work load. However, the nominal voltage they deliver is still 18V.

All batteries have an amp-hour (Ah) capacity, depending on the density of the battery cells. The Ah is a measure of battery capacity, commonly referred to as the ‘run-time’ – essentially how long the battery will produce power. It’s comparable to the size of the gas tank on a car. The larger the tank, the more gas it carries, and the further the car can travel. How much further the car will travel depends on a variety of factors – foremost the efficiency of the motor. Likewise, a 9.0 Ah battery will theoretically deliver a current of 9 amps for 1 hour, 1 amp over 9 hours, or 18 amps over 1/2 hour. Runtime will, of course, depend on the environment and application in which the power tool is used.

Another measure of battery capacity is the watt-hour (Wh) rating – the amount of watts the battery can supply per hour. It’s comparable to the gas in the gas tank of a car. Watt-hours are determined by multiplying the battery voltage by the amp-hour rating. An 18V battery with a 9.0 Ah rating supplies 162 nominal watt-hours of power, while an 18V 6.0 Ah battery would supply 108 watt-hours. Given the pace of change in power tool technology over the past few years, we shouldn’t be surprised to see even more new innovations over the coming years. 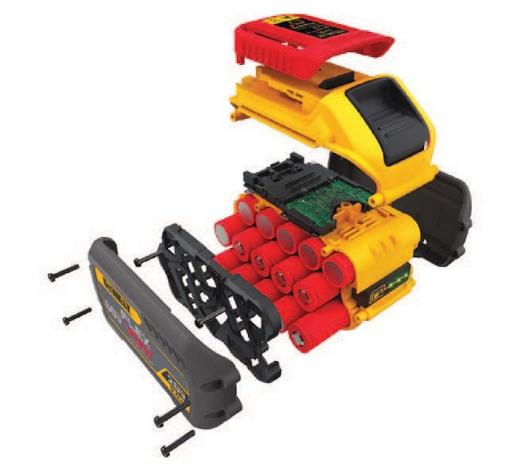 Years ago, when rechargeable batteries first came onto the woodworking scene, their main purpose was for powering drills. Since then, manufacturers have found many new ways for woodworkers and DIYers to harness the power of a battery in our work. From circular saws and belt sanders to angle grinders and work lights, rechargeable batteries are now almost everywhere in our shops. Recently, the advent of new, high-powered batteries has allowed manufacturers to let their imaginations run wild and create cordless tools that will make our day-to-day tasks easier, both in and out of the workshop.

One new tool that immediately comes to mind is the Makita DCU180ZX2 Power-Assisted Wheelbarrow. With the power of dual 18V batteries and the strength to carry large weights, moving a load of gravel or soil has never been easier. Visit Makita.ca for more details. 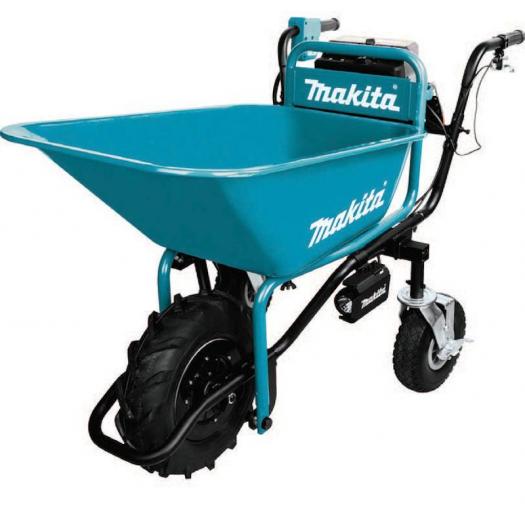 A brushed motor consists of wires, magnets and brushes. An armature rotates within a stator (a fixed magnet) and is connected to a drive shaft and commutator. Carbon brushes provide the electrical connection between the power source (the battery) and the commutator, which reverses the direction of current flow to the armature so that the magnetic fields maintain rotation. And it’s that rotating force that produces torque.

A disadvantage of this design is that the brushes constantly remain in contact with the armature, creating friction and heat, which reduces the efficiency of the motor. The constant friction between the brushes and the commutator wear each other down, reducing motor performance.

A brushless motor does away with the brushes and the commutator. Like a brushed motor, it has permanent magnets and electrically induced magnets (the stator). However, in place of brushes that provide the electrical connection, a brushless motor uses an external electronic speed controller that creates the revolving magnetic field between the two magnets and causes the shaft to spin.

A major advantage of this system is reduction of friction inside the motor, resulting in less wear on internal components and less heat buildup, resulting in a longer motor lifespan. Because the electrical connection is controlled digitally rather than mechanically (by brushes), brushless motors run more efficiently, transferring more power to the drive shaft, and for cordless tools, this translates into longer run time. Like brushed motors, they can heat up, particularly under a heavy load. However, they can be more effectively cooled.