Some small shops are so tight on space that a permanently set-up table saw isn’t an option. Portable table saws are often the tool of choice for contractors, but there’s nothing saying small shop enthusiasts can’t use them to their advantage to help in a tight situation.

The table saw is probably the most used piece of equipment in many shops. It can perform a wide variety of tasks with ease, so it’s no wonder table saws are so commonplace.

There is a wide range of smaller table saws on the market today, and most manufacturers have vastly improved their portable table saw offerings in the last decade. Today’s models are lighter, more robust and better featured than ever. 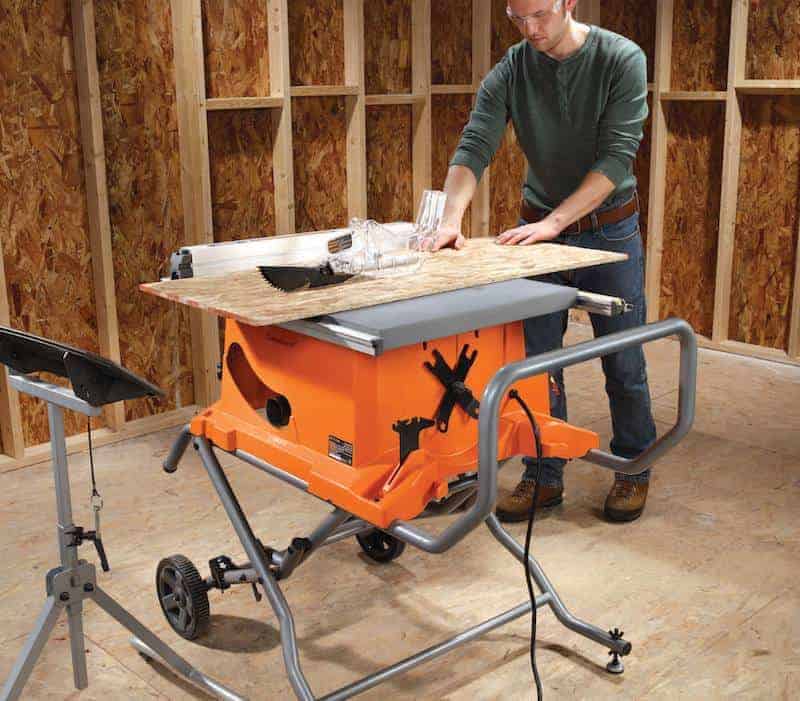 One thing that stood out to me with all the table saws that I looked at was the blade guards. It used to be when you bought a table saw, the first thing you would do is throw away the guard, as they were more of a hazard than a safety device. Not so any more. Due to changes in C.S.A. requirements in 2010, manufacturers were required to provide riving knives and functional guards on all new saws sold. Guards and kickback fingers must be removable and replaceable on the riving knife within 30 seconds without tools. All the saws I looked at have excellent guards. Another feature that all these saws shared was good dust collection. All of the blades were well shrouded underneath the table with a convenient vacuum port on the back of the saw. This ensures an attached vacuum is capturing maximum dust.

One area where some improvement is needed for all the saws I looked at is with the rip fences. All of the fences had some sort of quirk that I didn’t like. Manufacturers seemed to either make their fence accurate but not user friendly, or vice-versa. A few were downright complicated.

All the saws I tested used 15-amp universal type motors. This is the same type of motor that your mitre saw or other hand-held power tools use. These motors have lots of torque, and will provide the saw the maximum amount of power that can be obtained from a standard household outlet. It is important to remember that these saws don’t have unlimited power, though. All the saws that I tested came with a blade, even if it was poor. Having a good blade will reduce the amount of power the motor needs to make a cut. Using a thin kerf blade on these saws is also a good approach.

I liked a number of things about the Bosch GTS1031. There’s onboard storage for all the extra parts, and the fence locked securely. Bosch makes an optional accessory stand for the saw, which is easy to use and folds flat when not in use. This makes the saw highly portable. The fence was a little confusing to use with the built-in tape measure. There are two scales printed on the tape – one for use with the right table extension folded in, and one for use when the table extension is extended. Also, when the table extension is folded in, you read the setting from the cursor on the fence, but when you put the table extension out you have to read the setting from another cursor positioned in front of the blade. The fence needs to be locked in the right position on the extension for the tape to read correctly. A number of the saws used this system for their fences. Bosch did at least print instructions on the fence rail; not all the manufacturers that used this system did this. 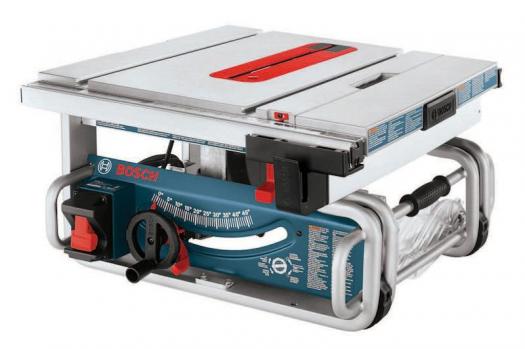 The King KC-5100C had some excellent features. I liked the large size tabletop. I also liked that the wheel stand was included with the King saw. The assembly was a bit time consuming, as there were a lot of parts for the stand, but otherwise the saw was fully assembled. I liked that there was onboard storage for all the saw parts, and space for a spare blade. The saw also had a great fine adjust wheel for the tilt. A dado insert plate is also included. The fence on the King saw locked securely and was fairly easy to use.

The unique feature of the Skil SPT70WT-22 saw is its worm drive motor. Skil uses a right angle drive similar to their legendary handheld saws to give this table saw lots of torque. Because of the worm drive motor, this saw is also able to get slightly more blade height (3-1/2″, as opposed to 3-1/4″), allowing it to cut through a 4 x 4 fence post in one pass. The Skil saw also comes with a 30-tooth Freud ripping blade. This was the only saw I tested that came with what I would consider a premium blade. I cut 3/4″ cherry with the Skil saw and found it had lots of power. This saw had many nice features including on-board storage for all accessories and an optional folding stand. The fence was virtually identical to the Bosch; however, the Skil fence didn’t slide as easily. 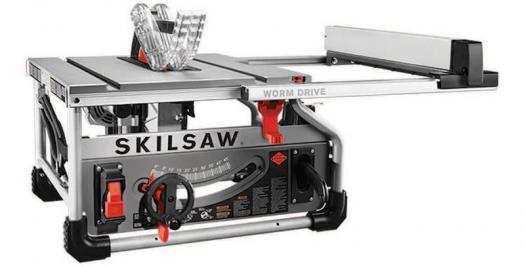 The DeWalt DWE7480 featured a different fence system than all the other saws I looked at. The fence locks onto the rails in one of two possible positions, depending on the width of rip you’re cutting. The fence rails are then moved left and right with a handy knob on the saw. The system allows the fence to stay parallel to the blade, and it’s also a lot simpler to figure out which of the two different measurement scales to use. I also liked how the fence locked onto the rails. It seemed like a more secure system than others, and because there are alignment pins on the front and back rail, it seems unlikely that the fence would get out of true. The DeWalt saw also packs into a very compact cube with all the accessories hidden away onboard, making it good for storage or travel. 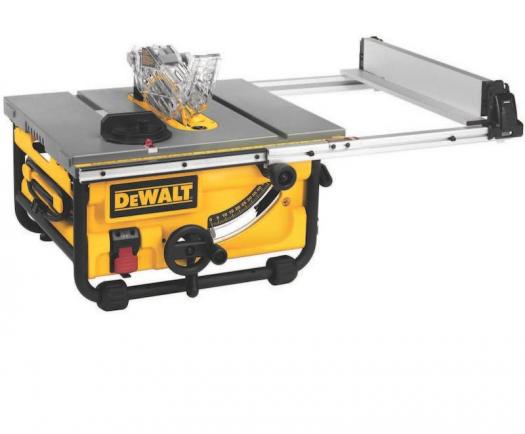 The Ridgid saw showed a lot of promise as I unpacked it. Everything was simple, sturdy and well thought out. Like most of the other saws, there were onboard storage places provided for all the accessories and a spare blade. The stand was similar to the King, but I found the locking/release lever on the Ridgid a little better positioned and easier to operate. I also liked that there was a fine adjust knob on the tilt setting for the blade. The biggest thing I noticed was the fence.

The fence has one scale, and the setting is directly read in any position – very well thought out. However, once I started playing with the saw I discovered the fence would slide out of position with minimal pressure when locked in place. I adjusted the locking mechanism a bit (there is a C-bracket under the front of the table that controls the tension) and was able to tighten up the fence a bit, but I still was able to move the fence without excessive pressure. The Ryobi table saw was the most economical saw I tested. It’s compact and simple, and does not have all the bells and whistles that the other saws have, but depending on your needs, it may be suitable. While it doesn’t have a fold-up stand or big table top, it has a powerful 15-amp motor like the other saws. The Ryobi saw comes with a four-leg stand, that must be assembled. The saw could also be used on a bench top or cart. The stand doesn’t fold up, but even with the saw bolted to the stand, the package isn’t so heavy you can’t move it around. The Ryobi only has 12″ of rip capacity, but for smaller projects this may be fine. The saw doesn’t have standard 3/8″ x 3/4″ mitre slots, so you probably won’t be able to use many after-market jigs with this saw. 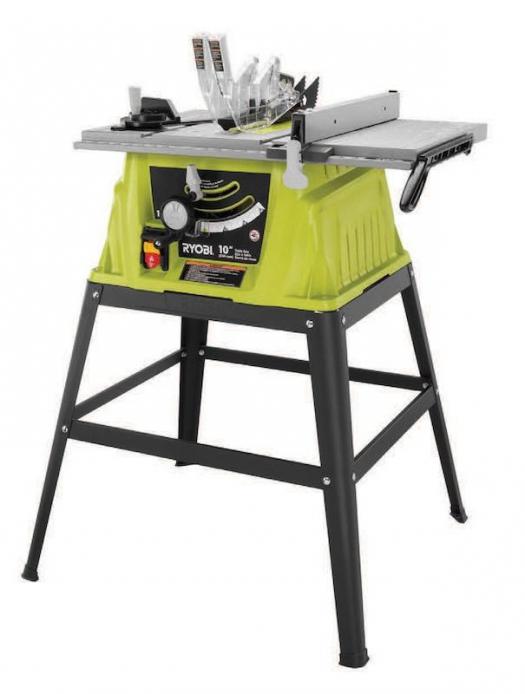 The MasterCraft saw was the quietest saw of all that I tested, at 83 dB. It also has a soft start, which is a nice feature. It shares many of the common features with the other saws, such as onboard storage for all the extra parts, and extendable fence/table on the right side of the saw. The MasterCraft saw also comes with a 12″-deep rear outfeed support system, which none of the other saws included. This outfeed support is very helpful for cutting longer stock. 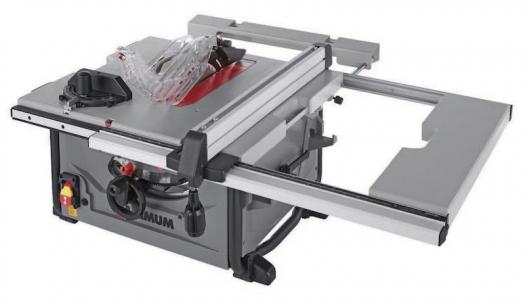 The saws I looked at for this article fell into one of two size categories. The Bosch, Skil, DeWalt, and Ryobi all are what I would call benchtop/small portable saws. The King, Ridgid, and MasterCraft saws are what I would call large portables. All of these saws were portable, but some are designed for easy portability, and some more for certain features. For example, only the Ridgid and King table saws had the ability to take a dado blade. These saws were also the largest ones I tested, both in weight and physical size. The Bosch, Skil, DeWalt and Ryobi saws all had smaller tabletops, but were up to 30 lb lighter than the large portables. Choosing the best table saw for under $500 was a difficult task because there were two different styles of saws to choose from, really geared to two different sets of needs.

In order to pick the “Best Hobbyist” saw, I tried to picture what features would be the most important to the home hobbyist. I think versatility and reliability are important, so the saw needs to have maximum capability and be solidly built. It still needs to store compactly and be easy to move around, as space in the hobby shop is usually limited. It also needs to be easy on the wallet. For this reason I picked the King KC-5100C. While it’s a bit heavier, the hobbyist isn’t likely to be lugging it up a flight of stairs or putting it into the back of a truck. I think the hobbyist is more likely to have the saw in the garage, and maybe roll it out into the driveway or yard on occasion. It comes with a wheel stand, so moving it around in the shop is easy enough. It also has a dado arbour and comes with the needed table insert, giving lots of versatility. The fence locks solid, and other than the math required with the scale, I have no complaints about this saw.

For the “Best Professional” saw, I tried to think of what would be most important to a contractor. First is weight. If you’re going to be taking this saw in and out of a truck all the time, you don’t want it to weigh a ton. It needs to be compact so it doesn’t tie up too much space in a truck. It needs to be easy to use, accurate and rugged. For these reasons I picked the DeWalt saw. It packs small but can perform big. There is an optional stand available for it, so you don’t have to work on the ground. It has 24-1/4″ rip capacity so you can rip a sheet of plywood in half. The DeWalt was also the lightest of all the saws I tested at 45 lb. For these reasons I think the DeWalt saw would make an excellent addition to a contractor’s tool kit. 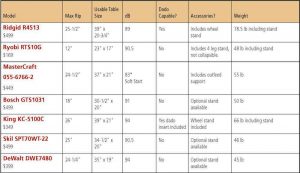