After running well over half a mile of material past a total of ten router bits, I have a much bet­ter idea of what bits leave the smoothest profiles – out of the box and after a lot of hard use. I tested ten router bits, all of which are commonly available in Canada. Some of the details I found along the way sur­prised me. Keep in mind that it is not only the scores after the test that are important; the scores before the test are crucial as well because that is when the expectations are high. We all expect a new router bit to be working at its best, creating silky smooth profiles with ease when brand new. As I found out, that’s not always the case. 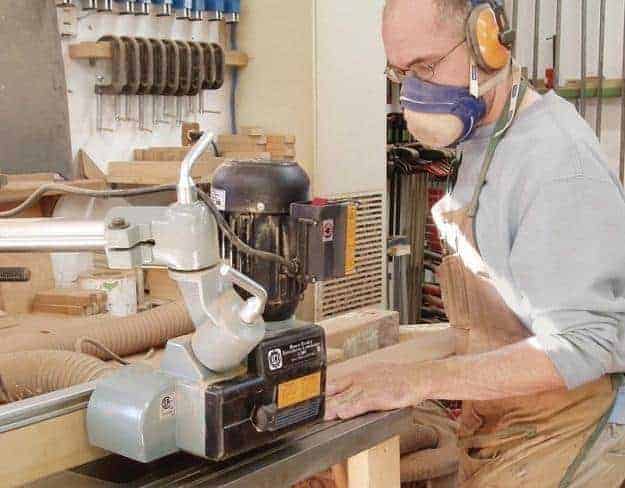 In order to reduce variables, I used a classical roman ogee from each manufacturer. Each bit had a ½” shank, except for the Mastercraft, which had a ¼” shank. Not all manufactur­ers make the exact same profile, but to reduce differences, the diameter of the cutting circle was as close to 1 ½” as pos­sible. Each bit was installed in a router table and was used to machine its profile in 320′ of MDF. A power feeder was used to obtain consistent results across the test, and to save my poor shoulders. I glued up a test panel of hard maple, mahogany, cedar and oak so I could get a good cross-sec­tion of results from the end grain of four popular materials. I tested on end grain because it is more difficult to machine and I felt I would end up with larger variations between the profiles, which would make it easier to see the differences in each sample and grade them accordingly. I set the bit to machine an appropriate depth of cut, took the initial test pass, then fed 320′ of MDF past the bit and then repeated the end grain test pass on a fresh solid wood edge. I used MDF because its high percentage of abrasives make it hard on cutting edges. After each test cut, I removed the freshly machined edge and numbered it so I could send it to two sea­soned woodworkers to judge. Our numbers were averaged to give a final score.

Comparing the initial test cuts gives me their “off-the-shelf” performance, and there were substantial differences. Some bits machined a perfect edge, as you would expect. A few bits left unacceptable surfaces for a brand new cutting edge. The worst performer was the Mastercraft, which was the only off-the-shelf bit to leave small checks on the routed surface of most of the species. The new Mastercraft, Power Sonic and Elite bits left small ridges on the surface, caused by nicks in the blade. The rest of the bits produced at least an acceptable edge that could be sanded and finished with mini­mal effort. Three bits – Freud, Dimar and Lee Valley – left a flawless surface.

As I fed the MDF past the bits, the only thing I could com­ment on was the sound the router made as it spun each bit. All ten bits started off sounding smooth and even but as the test progressed there where a few who stood out … for the wrong reasons. The Mastercraft, Power Sonic and Elite bits all caused the router to work extra-hard, starting about half way through the MDF test cuts, even though the 3 ¼ HP router with electronic speed control was providing what should have been more than adequate power. This indicates the edges were losing their sharpness, causing the router to work very hard to try and maintain proper speed. All the bits made it through the test though. 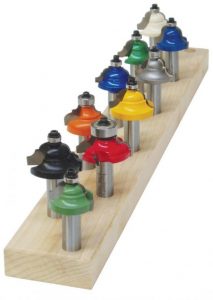 After making mountains of sawdust, I was really look­ing forward to seeing how the bits would compare to each other. I scored the ten profiles, then sent them out to Scott Larry of Larry’s Electric, a woodworking retailer in Peterborough, and Matt Dunkin, owner of Green By Design, a construction company, so they could give each profile a score out of ten. For the most part, we all agreed on where the profiles ranked. All bits produced worse edges after the test but the scores didn’t degrade at the same level. The CMT profile dropped by over four points, while the Blue Tornado and the Mastercraft edges fell by less the one point. Most profiles dropped by between two and three points. An edge rating that drops only a little after the test indicates its edge was more malleable and degraded slower – regardless of how good the initial edge it pro­duced was. A larger drop in rating indicates the carbide is more brittle and will stay sharper to a certain point, then drop drastically. These numbers are relative to how good the initial edge was and show what the trend is. Although there is some relevance to these numbers, the most impor­tant factor is the overall score of the edges after the test took place. The CMT, Power Sonic, Elite and Mastercraft edges would all need an incredibly high amount of sanding to produce an acceptable edge. A combination of burning, checking, whiskers at corners and uneven surfaces were left by these bits. In most cases, the profile seemed like it was burnished more than cut, due to the previ­ously keen cutting edge being dulled dramatically.

Faring better than this quartet was the Samona, Woodpecker, Lee Valley, Blue Tornado and Dimar bits. These five bits all produced edges that could be sanded and used without too much trouble. Minor burning, checks or whiskers were left on the edges, which isn’t surprising considering the abuse I hurled at them. What was surpris­ing was the Freud edge. It had very minor imperfections and would need nothing more than a light sanding to be considered ready for finishing. All these bits had two cutters, except for the Freud, which had two main cutters and two secondary cutters. These cutters obviously helped spread the work around, increasing the time it takes to dull the cutting edge. All three of us scored the Freud profile the highest.

When buying a bit, initial price is just the starting point. How good will the initial profile be? How long will that bit stay sharp? Will I use this bit often or only seldomly? Is the carbide thick enough to sharpen numerous times? Hopefully some of these questions will be answered by the information I’ve found. Now, if someone can help dig me out of this mountain of sawdust, I would appreciate it.

Thanks to the manufacturers who made this bit comparison possible. King for the use of a power feeder, Bench Dog for their router table surface and Freud for their router. 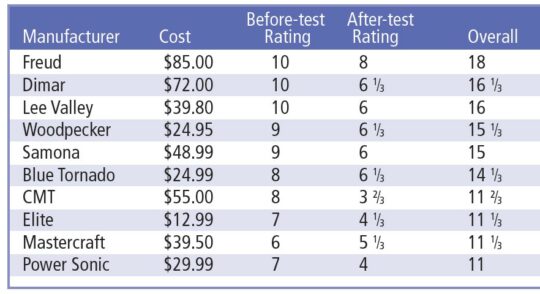