The SawStop CTS sets the standard for quality, convenience and safety on a jobsite or in a small workshop where floor space is at a premium. It works great, operates smoothly, makes accurate cuts and has the best bevel system on the market.

The saw is light enough for one person to move it around and compact enough that you can store it under a worktable. It offers durable quality, exceptional safety features and the power and precision you need to process stock up to 3-1/8″ thick. 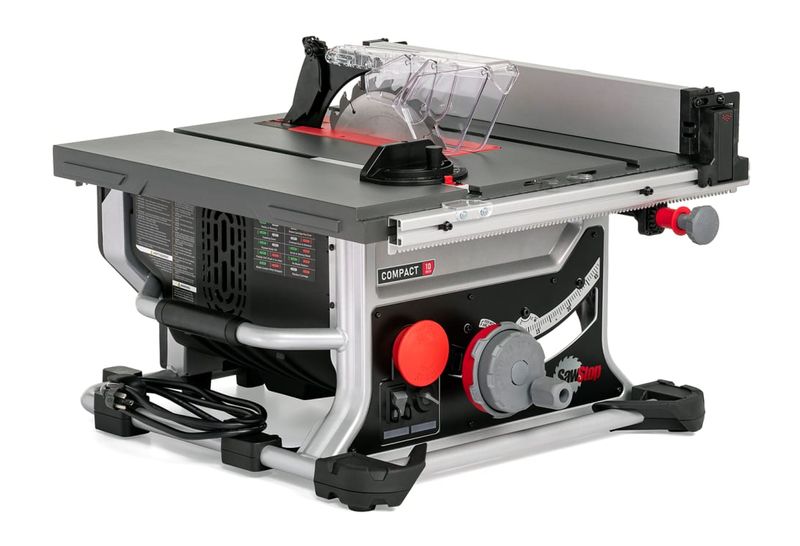 The SawStop CTS employs a direct drive 15-amp universal motor with a no-load speed of 4,000 RPM. SawStop has chosen not to list the horsepower (HP) rating for the saw, claiming that HP levels can be confusing and misleading. There’s good reason for this. While there is a standard definition to go by (one HP is equal to 745.7 watts or the amount of power used to raise 550 pounds 1 foot in 1 second), the way output is calculated by manufacturers isn’t consistent. And, of course, the quality of the components used in the manufacturing of the motor will affect its efficiency and performance.

It’s not surprising to find SawStop using a direct drive universal motor on the CTS. Direct drive motors transfer energy very efficiently with little energy loss. They also provide large amounts of power in quick bursts with constant torque and at variable speeds. They’re smaller, lighter in weight and generally require less maintenance over the lifespan of the saw. And they cost less to manufacture than belt drive motors – which helps to keep the consumer price lower. One downside is that they’re louder and generally don’t last as long as belt drive motors.

Perhaps as a result of using a direct drive motor, the CTS doesn’t accept a dado set, which is a minor inconvenience, as you can use a router table or handheld router and jig to mill dadoes and grooves.

The CTS weighs in at 68 pounds. With the optional CTS-FS folding stand attached it tops out at 86 pounds. That might seem like a lot but it’s still less than the Bosch and DeWalt (at well over 100 pounds each with stand attached) and a full 27 pounds lighter than the SawStop JSS Pro table saw. Because the CTS is essentially a 2-foot cube it’s compact enough to be moved around by anyone with a strong back.

I shop tested the CTS with the CTS-FS folding stand. For jobsite use the stand is an essential addition. Installing and removing the saw from the stand takes about 10 seconds – you just place the saw atop the stand and flip two locking handles (one on the front of the stand, one on the back). That’s it. One of the legs can be adjusted to accommodate uneven floors. For anyone considering the CTS for use in a workshop I’d recommend building a custom saw stand with an extended work surface. It’ll make cutting larger panels and long stock a tad easier. Plus, it makes optimum use of the space below the table saw.

The tabletop on the CTS is 22-5/8″ deep and 23″ wide (compared to 27″ deep and 44″ on a standard cabinet saw). The distance from the front of the CYS to the blade is about 7-1/2″.  This makes it a bit awkward when cutting wide stock using the miter gauge. On a jobsite this doesn’t pose much of an issue as we’re often crosscutting narrow dimensional lumber and moulding, and using a circ saw to break down sheet goods. In a workshop setting you’ll want to employ a few handy accessories. Use a sled when crosscutting wide boards. When ripping long boards use a height-adjustable roller stand or sawhorse. Cut large sheets to rough size using a circular saw and a straightedge, then do the final cuts on the table saw. Better yet, if you use a track saw you can cut large sheet goods to final dimension without having to resort to the table saw.

The tabletop isn’t made of cast iron, but rather powder coated aluminum, which means you can’t use magnetic accessories with it. And it scratches more easily than a cast iron top. You’ll want to avoid dragging metal encrusted stock over the top.

Once you get the knack, you can switch out the riving knife for the blade guard in about a minute, which makes it more likely you’ll end up using the guard. When not in use, the blade guard stores in a compartment at the back of the saw (along with the blade wrenches and miter gauge).

The CTS comes with a 24-tooth rip blade, a good choice for jobsite use. For shop use you’ll likely want to switch it out for a combo blade. Doing so takes about a minute and a half.

While I fully expected that I’d need to do some fine-tuning, I found the CTS ready to rock out of the box. If you do need to make any adjustments the owner’s manual has clearly written instructions that are easy to follow.

I did find a slight dish of .008″ on the upper left side the tabletop – small enough that it doesn’t affect any crosscutting or ripping. More importantly, it was dead flat across the middle of the tabletop.

The rip fence was straight along its length but slightly concave (about .005″) across its width (the rails Z-axis) – about the thickness of a sheet of photocopy paper. I’ve not found that this has any adverse effect then ripping stock.

The rack and pinion fence is fabulous. It slides smoothly, locks firmly in place and is dead parallel to the miter slot and the blade.

The zero-clearance throat plate, made of a glass-filled plastic, is quite stiff, with no flexing worth mentioning.

There are 3 sets of lugs (3 lugs on both the front and rear rails) that enable you to position the rip fence on the saw. When the fence is positioned on the lugs furthest to the right of the blade you can get 24-1/2″ of rip capacity. The lugs on the left of the blade are used to store the fence during transit.

There is a duplex scale on the front rail. You use the top of the scale (black numbers on a silver backing) when the fence is positioned on the lugs to the immediate right of the blade. When you place the fence on the lugs furthest from the blade you’ll read from the lower scale (silver numbers on a black backing). It would have been nice if SawStop had included a magnifier on the clear position indicator lens.

While the rack and pinion fence is fabulous, the micro-adjust bevel system is outstanding – the best you’ll find on a jobsite saw. There is a single large round handle that controls both blade elevation and bevel adjustment. Pulling the handle forward releases the bevel lock and moves the blade to the middle position. You then turn the wheel to fine-tune the exact bevel angle. It’s super quick to set the bevel angle this way.

A feature common to most, if not all portable table saws is the articulating sub-fence. You can use in in the low position when ripping narrow stock, or in the ‘shelf’ position to support wide stock when the fence is moved to the extreme right – this prevents stock from tilting downwards. 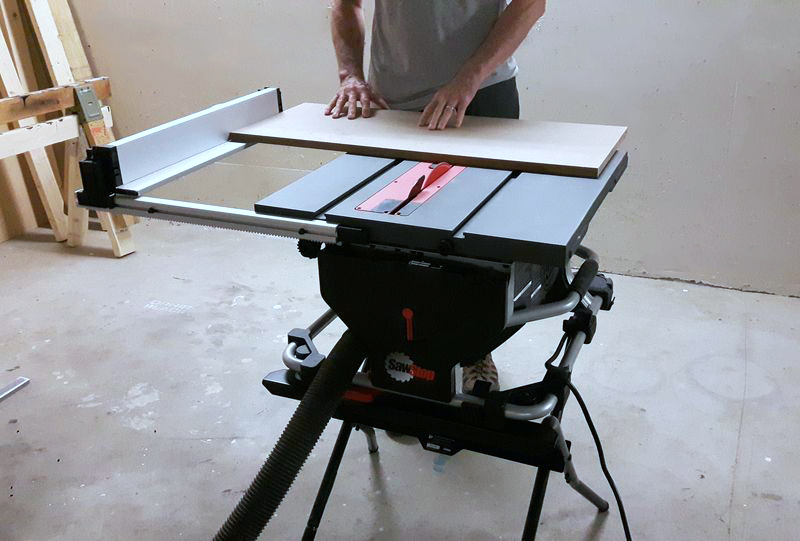 Moving the fence from low to fence position takes a few seconds.

While the miter fence might be usable in a pinch on the jobsite, it’s not overly useful in the shop. It’s flimsy to use and the scale is difficult to read. You’ll want to purchase or conjure up a proper fence.

I have the CTS connected to a 55L CamVac dust collector and an Oneida Dust Deputy. For the type of work I do (and the size of my shop) it’s a very effective dust management system.

One of the major advantages of any SawStop table saw is the patented blade braking system, which stops the blade within milliseconds on contact with skin to prevent serious injury. This feature alone makes the saw well worth the investment. The CTS comes with a brake cartridge installed. I suggest you go out and buy a spare, because if you do inadvertently trip the brake you won’t be able to use the saw until a new cartridge is installed. I found the cartridge easy enough to remove, but finicky to install – patience is the byword here.

I can make precise repetitive crosscuts and rip cuts and can easily cut 4′ by 4′ panels to size on the CTS. And there’s been no drop in power ripping 2″ ash. For large panels and long wide boards I cut the stock down using a track saw before going to the table saw.

The SawStop CTS sets the standard for quality, convenience and safety on a jobsite or in a small workshop where floor space is at a premium. It works great, operates smoothly, makes accurate cuts and has the best bevel system on the market.