A pro-quality tool that has easy staple loading, quick depth drive adjustment, instant staple shooting, and negligible recoil, with the advantage of both single and bump mode firing.

Staples are a good choice in many situations where you would normally use a fastener up to about 2″ in length. Applications include sheathing, paneling, sub-flooring, roof decking, fascia and soffits, cabinet assembly, upholstery and insulation. They’re worth considering for at least three reasons — they have excellent holding power, they’re quick to install, and they’re very cost effective.

The Senco F-LXP is part of the company’s new line of cordless fasteners all of which include Senco’s highly dependable Fusion drive system. This pro-quality stapler is primarily geared to carpenters, renovators, cabinetmakers, and other tradespeople doing production work, rather than DIYers or craftspeople looking to use a stapler for more light-duty, intermittent work. 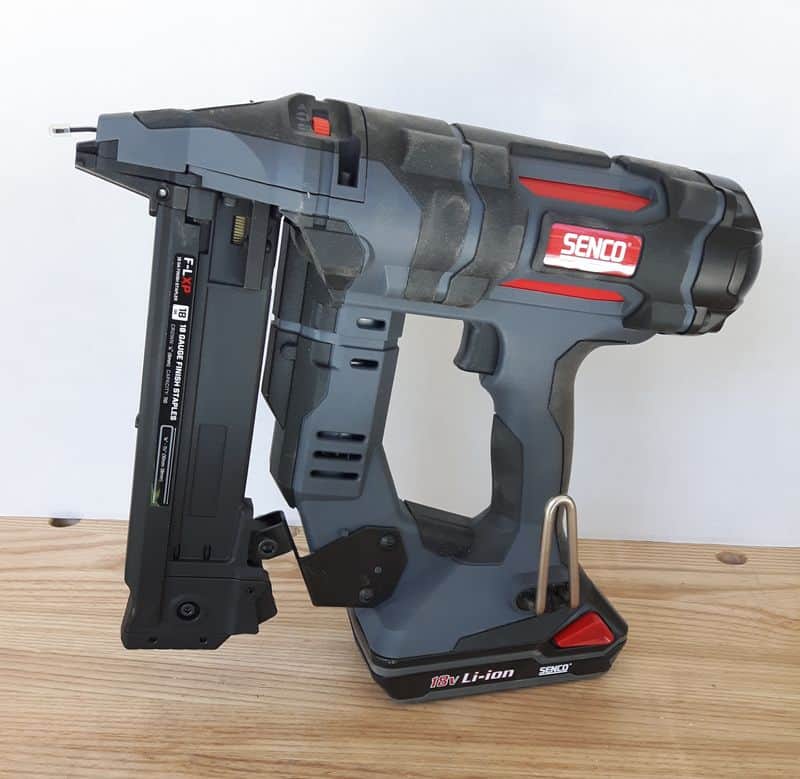 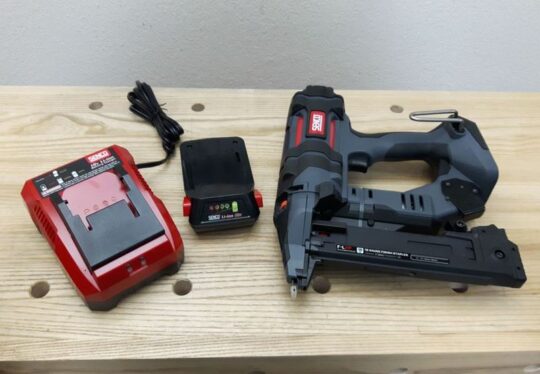 The Fusion drive system is what really makes Senco nailers and staplers unique from other battery powered products. Rather than using an internal combustion engine powered by a fuel cell or a motor driven flywheel, the Fusion system uses a self-contained permanently sealed pressurized chamber that’s filled with nitrogen. When the trigger is pulled, the pressurized nitrogen forces an enclosed piston forward, which in turn powers the driver head to sink the fastener. When the trigger is released, the motor resets the piston position which re-pressurizes the nitrogen cylinder, so it’s ready to sink the next fastener. And because the nitrogen tank is a closed system, you don’t have to recharge it or replace it.

One of the major advantages of the Fusion system is that there is no ramp up time – pull the trigger and the fastener shoots out instantaneously. I found that I could consistently count on at least one shot per second – about as quickly as I can pull the trigger.

Another important advantage of the Fusion system is that there are considerably fewer parts than found in a typical cordless nailer. Which means fewer things can go wrong, not as many parts to wear out, and a longer service life. In fact, Fusion staplers are virtually maintenance free. There is nothing to oil, and no exhaust. Not surprisingly, they’re quieter in use than either pneumatic or cordless nailers.

At almost 7 pounds (with battery installed) the F-LXP is heavier than an equivalent pneumatic stapler. However, the advantages over a pneumatic stapler are significant – no compressor, no air hose, much less noise and significantly easier to transport to and from the job site. While heavier than a pneumatic it’s no larger in size and is quite well balanced, though slightly heavier at the front. The rubber over grip provides some cushioning, which makes the stapler less fatiguing to use over long periods of time.

I’m not a big fan of nylon tool bags, but the Senco storage bag is a pretty good deal. It’s large enough to hold the stapler, battery and charger, and there are three inside pockets, eight exterior pockets, and a wide zippered pocket, enabling you to carry a load of accessories. Plus a convenient shoulder strap.

The F-LXP uses an 18V, 1.5Ah (27Wh) battery that delivers up to 600 shots per charge. The battery fully charges in 45 minutes, but even more impressive, it achieves an 80% charge in 15 minutes. Similar to most chargers on the market now, the Senco fast charger has built-in circuitry to protect the battery from over charging. The battery has a convenient on-board battery fuel gauge. If you plan to be using the F-LXP on a steady basis, it’s worth buying a second battery. There is also a 3Ah battery (VB0161).

The body of the F-LXP is made of a high-impact ABS plastic, the nitrogen cylinder is made of aluminum, and the magazine is made of a impact resistant carbon fibre composite.

It shoots 18-gauge 1/4″ crown medium wire staples from 3/8″ to 1-1/2″, which covers all my stapling requirements for cabinet assembly and trim work. The magazine has a 100 clip capacity and a wide quick view window that makes it easy to see when it’s time to reload. The bottom loading magazine is easy to open and close, with just the right amount of spring tension. The drive switch controls it all. You can select between sequential firing (one press of the trigger shoots one staple) or bump firing mode (every time you tap the nose it shoots). Hold the button for a second or so and it turns the power off. If you don’t turn the stapler off manually, it will automatically shut down after 34 minutes (which seems like a long time to me). Nonetheless, it conserves battery power. There is also a dry-fire lockout that prevents firing when there are only four or five staples left in the magazine.

The contact tip (or safety) and driver arm are metal, and the contact tip is covered with a non-mar pad. The pad is fairly small and made of a smooth plastic that gives it a tendency to slide somewhat on smooth surfaces. Senco doesn’t provide a spare pad.

At the front of the tool is the depth adjustment thumb wheel, enabling you to set staples flush to the surface, just shy of the surface, or buried out of sight. You use the thumb wheel in conjunction with the depth gauge window, which gives you a visual clue of how deep the nails will be set, eliminating the need for guess work. I found depth adjustment to be very quick and easy.

There is also an LED work light that comes on automatically and makes it easier to see where you’re placing staples. It’s also helpful if you’re working in less than ideal lighting conditions.

I’ve been using the F-LXP for assembling cabinet boxes – it’s quicker and more economical than using biscuit or pocket joinery and when supplemented with a high strength adhesive will stand the test of time. Hardwood has nothing on the F-LXP either – I was able to sink 1-1/2″ staples into alder, oak and beech like a hot knife into butter.

I’ve found there is a lot to like about the F-LXP and little to dislike. It’s proven to be a well-balanced tool that has easy staple loading, quick depth drive adjustment, instant staple shooting, and negligible recoil, with the advantage of both single and bump mode firing.

The wide range of staples that it accepts enables you to handle virtually any task for which you’d use a stapler. And, not having to drag a compressor and hose to and from a job site, and often from one floor or room to another, is a real time saver – not to mention a lot easier on your back. While priced somewhat higher than other cordless staplers, I think it’s a very good investment in a top quality tool. 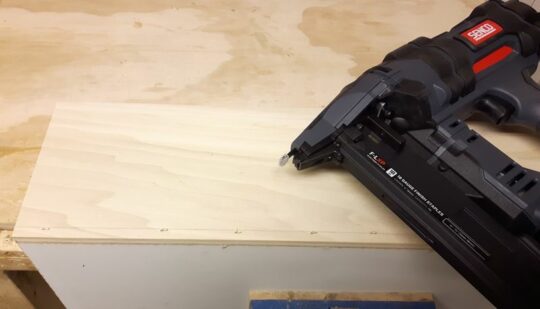