Small Shop Compressors 3 Gallons and Under

I wanted to test these compressors in a practical way that was mean­ingful to the average user. In the typical home shop or contractor application, the most common appli­cation for a compressor is to power a pneumatic nailer. One test I performed was to see how many “shots” could be fired before each compressor would cycle on. I also measured the dB rating, pump-up time from an empty tank, and recovery time. I also noted what pres­sure the compressor charged up to, and what pressure the tank dropped to before recharging. I believe that these statistics will be most relevant to readers. 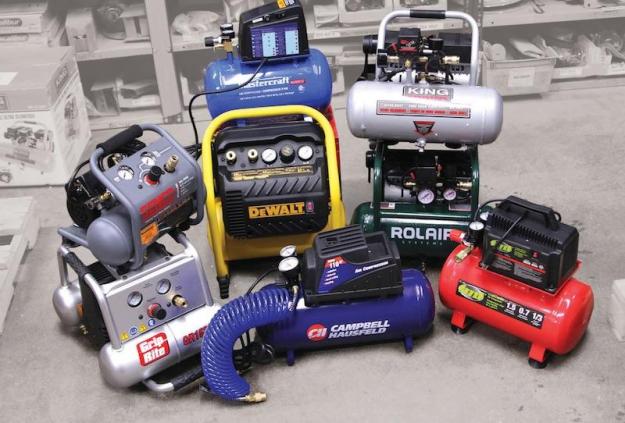 Pump-up and recovery times have been measured with a stopwatch. Pressure readings were taken with each unit’s own pressure gauges. It should be noted that this assumes each gauge to be calibrated identically. However, gauges do vary, so I would consider the pressure readings to be accurate to within 5 percent. For the “shot” test, I used the same nailer and hose hooked to each compressor. I used Grex’s 1850GB, which is a fairly powerful 18g brad nailer. The 1850GB has a fairly large cylinder to obtain its power, which means it will consume more air than most nailers. The point of the “shot” test is not to give an absolute number of nails to be driven by each compressor, but a rel­ative comparison between compressors. Using smaller nailers will allow the com­pressor to go longer between recoveries.

One of the most important things I dis­covered during the “shot” test is that some of these compressors drop well below 90 PSI before recharging. Most nailers are designed to run at 90 PSI. Running them below this pressure will result in a drop in fire power. This may result in fasteners not being fully driven with the tool. This problem will become especially obvious in smaller nailers that have less driving power to begin with. This problem will also be more apparent in hard woods.

There are a lot of factors involved in picking an air com­pressor. The choice made will be somewhat dependent on the intended purpose of the unit. If I was going to pick a unit to carry around all day, then obviously weight is a concern. If I was going to buy a unit that would stay in the shop, I may look at other features and ignore weight, knowing I would never carry the compressor. Looking over all the compressors, I think that the King KC-1620A represents the best value for consumers. The King has a quick pump-up and recovery time, is very quiet, and is at an attractive price. The King compres­sor gives me good value for the money spent. The KC-1620A is a bit heavy, so if you need a high level of portability, you may want to look at the Senco PC1010N. At 20 lbs., this compres­sor is very easy to carry around. It has a small tank, so it is not a good choice if you are doing a lot of nailing, but for smaller touch-up and assembly jobs it is perfect. For everyday use by a contractor on the job, I would pick the DeWalt or the Rolair. I like that the DeWalt works at a higher pressure. This means there is no worry about nailer malfunctions due to lack of air pressure. If noise is a concern, the Rolair is the quietest unit we tested.

The Senco compressor is the smallest compressor I tested, with a tank size of just 1 gallon. However, at just 20 lbs., it is one of the lighter compressors avail­able. The Senco compressor has good protection for the gauges and controls, which is important for a compressor that might get tossed into a work vehi­cle, or bounce down some stairs. Given its fairly small pump size, it still had a respectable pump-up and recovery time. This compressor is probably too small for large framing jobs, but would be excellent for small jobs outside the shop, given its small size and light weight. 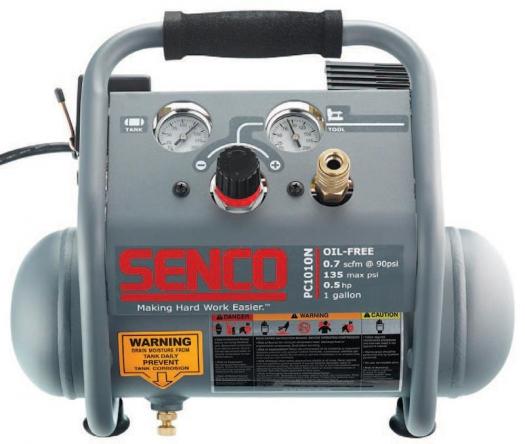 The Grip-Rite compressor had a very respectable pump-up and recovery time, at just over 1 minute to reach 125 PSI. I also liked that the unit only dropped down to 95 PSI before recovering, as some units dropped well below this. However, the Grip-Rite compressor was the second heaviest unit we tested, and I also did not like the fact that none of the han­dles were center-balanced. Most of the compressors I tested could be picked up and carried with no rotation, but the Grip-Rite must be rotated into carrying position when you pick it up. 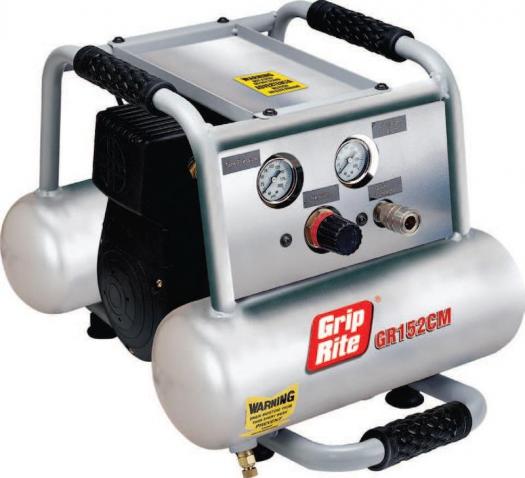 The DeWalt compressor employs a unique belt drive system, which allows it to develop the required torque to pump the tank up to 200 PSI, yet still be fairly quiet. The DeWalt compressor allowed our test nailer to fire a respectable 23 times before recharging. The DeWalt compres­sor also only dropped down to 160 PSI, which means that there were no concerns about tools not having enough pressure to operate correctly. The unit boasts an impressive 16s recovery time, which was the second-quickest of all the units, and means that you can work quickly without having to wait for the compressor to catch up to you. I also liked the dual couplers provided on the front of the DeWalt. This was the only unit tested that had this feature. The King compressor is impressive. It is one of the quietest units I tested, and also has the quickest pump-up and recovery time. The compressor does not have a roll cage around it like the similar Rolair unit, and this is probably why it is 6 lbs. lighter than the Rolair. This unit has plastic shields over the compressor head, which I like. Compressor pumps get hot during heavy use, so these shields should protect against burns from acci­dental contact. The pressure hoses between the pump and tank had some slight kinking from the factory. The unit had no leaks and operated fine out of the box. Both the King and the Rolair use similar low-speed pumps to produce air. These pumps run at half the speed of most compressors, but use two large cylinders, instead of just one. This allows them to com­press air quicker than most compressors, yet still be noticeably quieter. 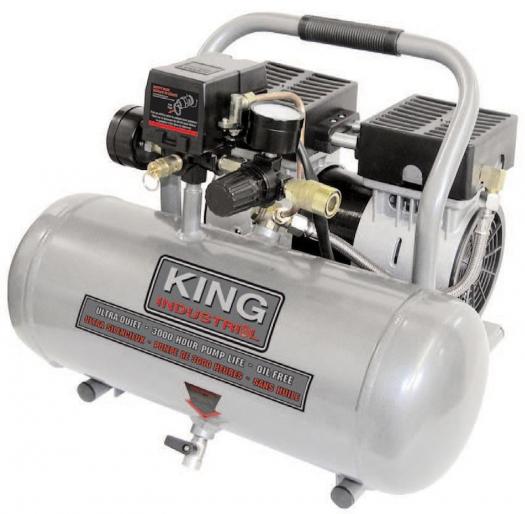 The Rolair compressor is similar to the King, in that it uses a low-speed dual-piston pump to produce its air. The Rolair has a slightly longer pump-up and recovery time compared to the King. However, the Rolair I tested charged up to 125 PSI, while the King stopped at 115 PSI. This is why the Rolair took slightly longer to pump up. However, it was able to fire a few more shots before recovering. Overall, the pump-up and recovery time is very respectable, so I would not shy away from this unit based on that. I also liked the fact that the Rolair has a roll cage around it. I think that for a mobile work person, this added protection is important. 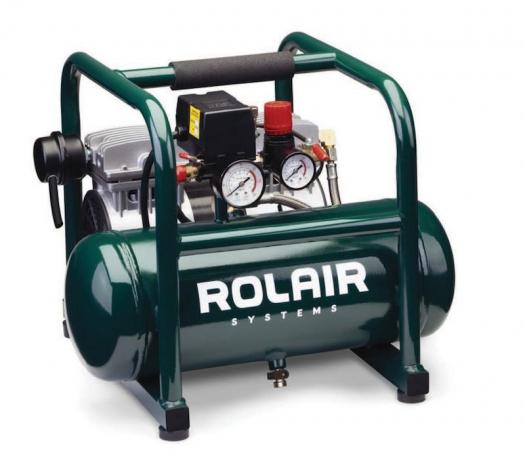 The Campbell Hausfeld compressor was the lightest of all the units I tested, so if weight is a concern, this is the way to go. This unit was also the noisiest of the compressors I tested. While the unit fired an impressive 36 shots with the test nailer before cycling on, the tank pressure dropped to 85 PSI. At 85 PSI, there’s a small chance a nailer it powers may have some trouble counter-sinking nails into very hard woods consistently. Regularly on sale for half the MSRP. 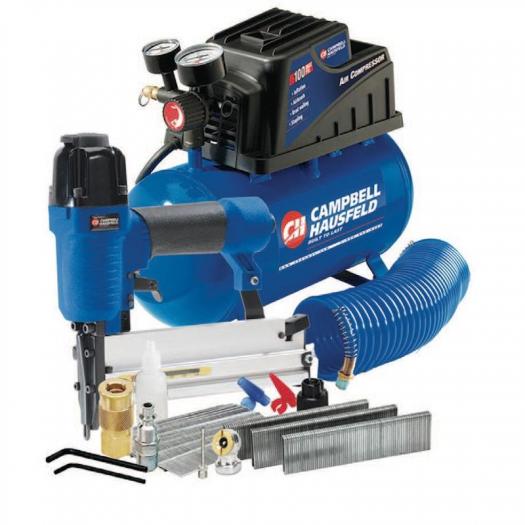 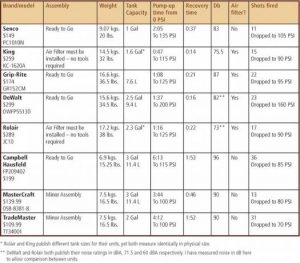 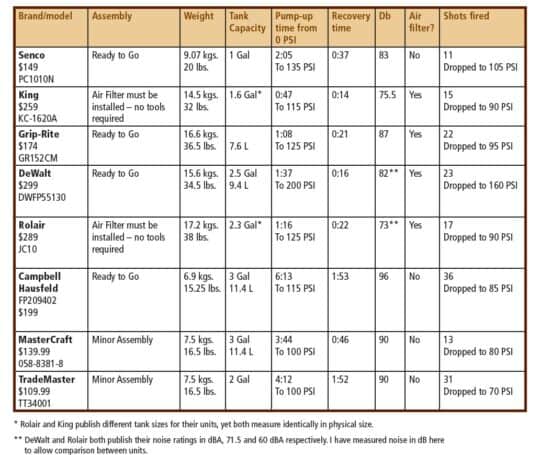