Products from Flexcut, Henry Taylor, Pfeil Swiss Made, Stubai and Two Cherries arrived in various degrees of readiness. In each case, we took time to prepare each gouge for use. This entailed creating a small inside bevel using a fine Arkansas stone, and then grinding and buffing the outer edge to achieve a keen edge. For now, we were mostly interested in the look, feel, utility, and steel used in the tools.

To test the tools, I enlisted the help of a good friend, and professional carver, Doug Bernhardt of Bernhardt Signs of Ottawa. We felt that having two opinions, one from a furniture maker, and another from a professional sign carver, added to the review. 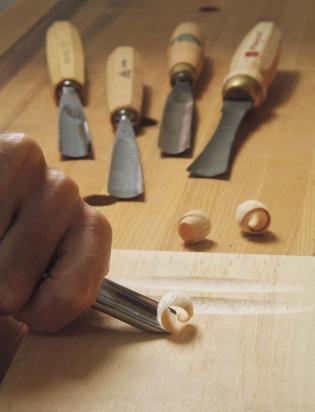 Each manufacturer sent three or four straight gouges. Gouges are typically marked, most often by stamping the blade itself, with one or two numbers. The first number indicates the sweep or curvature, and the second, if there is one, indicates the width of the cutting edge in millimeters. A tool with a minimum curvature starts with a #3 designation. Each gouge in a set gets progressively more curved until the curve is U shaped. The numbering is typically 3-5-7-9-11. Kudos to the Two Cherries Company from Germany for not only stamping the blade, but also the handle of the tool. Swiss Made, Two Cherries, and Stubai tools were all clearly stamped and readable. The Henry Taylor tools were stamped, but due to the black finish, and the small numbers, were somewhat hard to read. The Flexcut tools had labels on the packaging, but unfortunately nothing on the tools. A tip of the hat to Swiss Made; we deemed their tools the closest to being ready for use. 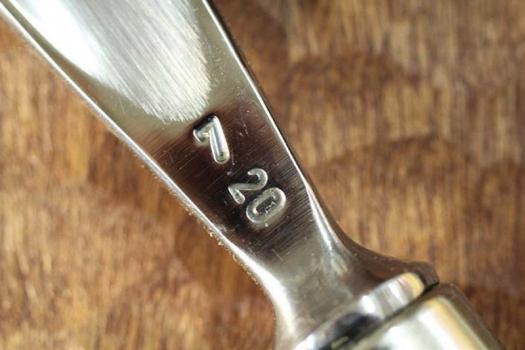 Clearly Marked? Swiss Made, Two Cherries, and Stubai tools have their sizes clearly stamped on them (upper). While Henry Taylor tools were stamped, it was difficult to read the number (lower). Flexcut tools were not numbered.

Get a good grasp

The handle on a gouge is very important, since it is the interface between the craftsman and the tool. All of the tools came with octagonal wooden handles, with the exception of Henry Taylor, that opted for round handles made of beech. Only the hornbeam handles on the Two Cherries tools came with hoops on the rear end, to reduce splitting when the gouge is used with a mallet. The Flexcut tool is fitted with an ash handle, but in each case, the finish of the wood was coarse by comparison with the other tools in the review. In the end, handles are a personal choice. Personally, I prefer the octagonal handles since they tend to prevent the tool from rolling off the bench, and that horrible sound of a freshly honed tool hitting the floor.

Steel is always a big topic of discussion among woodworkers. The key is to create a tool that is tough (meaning that it resists deformation) and hard, but not brittle. Gouges are usually hardened to a Rockwell C hardness of RC59 to RC61. Pfeil Swiss Made tools website confirms that their tools are hardened to this range, hand-forged from a Chrome-vanadium alloy. Two Cherries tools are hand-forged from high-carbon steel hardened to RC61. The Austrian entry, Stubai, features hand-forged high-carbon steel rated at RC59 to RC61. The British Henry Taylor tools are hand-forged, but I was unable to establish the Rockwell rating from available literature. Flexcut does not state their manufacturing method, nor the hardness. Flexcut is different from the other tools, in that the blades are thinner and, therefore, flex slightly during use. We tried these tools with a mallet, and found that the feel was not as satisfying as the other more traditional sets. Flexcut steel did stand up, however, and once we prepared the edge, it cut well.

To test the tools, we devised a basic test of simply carving a straight cut in a piece of pine. Pine is soft, and will crush if the cutting tool is not truly sharp. All of the tools cut well. Doug was pleasantly surprised at the Two Cherries brand, a tool that he had not previously used. He was pleased with the steel, the cut, and the feel of the tool.

What should you buy?

Over the years, I have read many articles that have stayed away from recommending tools during reviews. I found that many times I was interested in what the reviewer would have in his or her own tool kit. To that end, here is what you will find in my kit: Pfiel Swiss Made. In Dougs kit, which is much larger as he is a professional carver, I noted Stubai as his tool of choice. I did also see some Pfeil Swiss Made, and Henry Taylor tools. Doug says they are all fine tools, but when I pressed him for his favourite brand, he said Stubai he just prefers the steel a little more in the Austrian brand.

In the end, buy the tool that feels good in your hand, the one that looks good to your eye, and fits your budget. Any of the tools tested would provide good to excellent results; it is largely a matter of personal preference. All of the tools still require an initial tuning, and then regular tune-ups during use to maintain that all-important keen edge. For the most part, that means a few seconds on the burnishing wheel, followed by a quick couple of strokes with the Arkansas stone on the inner bevel.