Buying a new table saw blade can be a daunting experience. There are dozens of manufacturers offering a wide selection of blades.

On top of this, there are a host of factors that affect the performance of a blade: quality of the steel used in manufacturing the plate, the hardness and flatness of the plate, plate tension and balance, arbour hole concentricity and accuracy, tooth geometry, and carbide quality.

I recently looked at some of the more popular combination and crosscut blades from several of the leading manufacturers. What I found was that competition among manufacturers has generally resulted in overall high standards: all the blades I looked at delivered very good performance and value. The differences were less between “poor” and “high” quality than between varying levels of high quality. 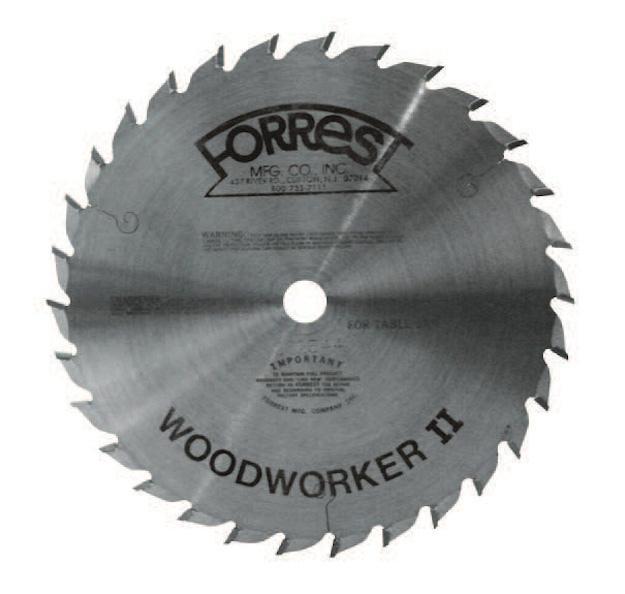 The majority of blades are laser cut rather than hydraulically stamped (or die cut). Laser cutting puts less stress on the plate, particularly at the edge, and allows greater cutting accuracy. All plates are heat treated and tempered to toughen the steel, usually in an oil bath, although SystiMatic uses a saline solution. The plates are also run through a grinder for flattening and then tensioned to prevent them from vibrating at high speeds. Tenryu and SystiMatic tension plates by hand (Exchange-A-Blade hand tensions its re-conditioned blades). Even with flattening and tensioning there will likely be some runout (wobble) in blades; up to .004” is considered acceptable.

Vibration and heat build-up are the bane of saw blade manufacturers. Most cut anti-vibration and expansion slots in their plates; a few fill these slots with a resin. The slots reduce vibration and noise, and help dissipate heat. Forrest recommends the use of blade stiffeners, which help to reduce blade vibration and noise, and contribute to producing a smoother cut. A few companies, notably CMT and SystiMatic, put a non-stick coating (such as Teflon) on the plate to help reduce heat build-up. Fortunately resin build up only occurs on the teeth and is pretty easy to clean with pitch remover or oven cleaner.

You’ll see that most combination blades use an anti-kickback design. Typically a chip limiter precedes each tooth, restricting tooth bite to a pre-determined safe amount.

The business end of a saw blade is its teeth. Tooth geometry, quality of the carbide used, thickness of the carbide and the quality of the brazing that attaches the teeth to the plate are all critical components. Teeth for ripping (also called “raker teeth”) are generally cut “flat top grind” (FTG), and rip through stock like tiny chisels. Crosscutting teeth are cut “alternate top bevel” (ATB), and slice across the grain like knives. Two important tooth angles are the angle at which teeth cut into stock (hook angle), and the angle the top of the tooth makes from side to side (top bevel). Greater hook angles cut faster and more aggressively but can result in splintering the underside of stock, particularly in sheet goods. Raising the blade about 1/4” above the stock helps to reduce splintering.

Increasingly, companies are using “super micrograin” carbide in the manufacture of teeth, which means they use smaller grains of carbide powder with titanium added to the binder. This makes for a tooth that can hold an edge longer between sharpening. The blades that I tested use C4 carbide, which looked well machined, with the honing on the CMT, Forrest and Tenryu blades almost mirror like. Teeth are brazed onto the plate with a low melt alloy, generally silver alloy. Some companies use Tri-Metal Brazing, which sandwiches layers of copper between a layer of silver alloy, reducing stress and giving better impact resistance. The brazing on all the blades in my test looked smooth and even without any pinholes. In general, thicker teeth will allow you to sharpen the blade more often – I expect to get at least 10 sharpenings per blade. A general principle is that the more teeth on a blade the smoother the cut.

Excessive heat build up is one of the leading causes of tooth deterioration. Heat build up can result from cutting abrasive materials such as MDF or melamine, running a dull blade, feeding stock too slow, removing too much material at one time, using the wrong blade for the type of material being cut, saw fence not properly aligned or inadequate horsepower on your table saw. Paying attention to these factors will help you get better performance from your blade.

There are hundreds of different saw blade styles and sizes available.

The SystiMatic catalogue, for instance, lists 147 table saw blades. Blades are advertised in three grades: economy, contractor and industrial (which use the best material milled to the highest tolerances). They come in various styles, the most common being: combination, crosscut, rip and dado. You will find blades in either a standard plate thickness (.080” – .090”) and as thin kerf blades (around .060”). Thinner blades may be desirable if you have a low horsepower table saw (1 1/2 hp or less) or if you are concerned about wasting as little stock as possible. Under sustained use, thin kerf blades may heat more easily than standard blades, which could lead to plate warping.

As well, the carbide teeth are smaller than on a standard blade, and hence they cannot be re-sharpened as often, which, to some extent, offsets their lower cost.

Crosscut blades are designed to produce clean, crisp crosscuts in solid wood and plywood. They come in a variety of configurations, though the norm seems to be 60 to 80 teeth in an ATB tooth grind with a hook angle in the +10 degree range. Combination blades allow you to perform both ripping and crosscut functions with the same blade. They typically have 40 or 50 teeth in an ATB grind plus an FTG (raker) tooth with a 15-degree hook. Usually you’ll see four teeth with small gullets followed by a tooth with a deep gullet, which serves to remove sawdust rapidly. Some combo blades use a triple chip grind (TCG), which is a FTG tooth with the sides of the teeth bevelled at the top. This helps to eliminate chipping in brittle material and sheet stock.

Combination blades are designed to do a good job for general sawing. When ripping with a combo blade it is a good idea to use relatively slow feed rates and limit your cuts to 2” and under. You can use a combo blade for occasional ripping of sheet stock. However, if you will be cutting a lot of melamine you might want to invest in a melamine blade, which uses a high alternate top bevel (H-ATB) grind with a 0-degree hook angle.

I tested 11 blades (6 combo and 5 crosscut) on an Inca saw. Prior to beginning the tests I checked the alignment on my miter gauge, rip fence and arbor shaft. I used a blade stiffener on all blades, making the same number and type of cut with each blade. For the combo blades I made rip and crosscuts in plywood, melamine, fir and ash. For the crosscut blades I restricted my test cuts to fir and ash. For cuts in softwood and sheet stock I raised the blade 1/4” above the stock. For hardwood I raised the blade 1” and fed at a faster rate. I took a fresh cut with each blade, tested them all, and then took a final cut.

The cuts made by the crosscut blades were very impressive. In particular I found that the Tenryu and Forrest blades left virtually no teeth marks. You can see what I mean from the above photo, which shows final samples from the five crosscut blades. The CMT, SystiMatic and Exchange-ABlade finishes were virtually indistinguishable from one another.

For the weekend woodworker or for someone doing rough carpentry, the Exchange-A-Blade makes good sense for a combo blade. They are very competitively priced and you can get them re-sharpened at just about any hardware store. For the serious woodworker or in a professional shop the CMT, Forrest WW2 or Tenryu combo blades are a good bet, and priced within a few dollars of each other.

For finish cross cutting the Forrest Duraline or Tenryu blades are unsurpassed. I like the much larger teeth on the Forrest blade, and the fact that you will get more sharpenings from it helps offset its premium price.