The bevel-up configuration of this plane allows Der-Garabedian to use it comfortably. He found other #1 planes difficult to grasp, but the Veritas fits his hands nicely. 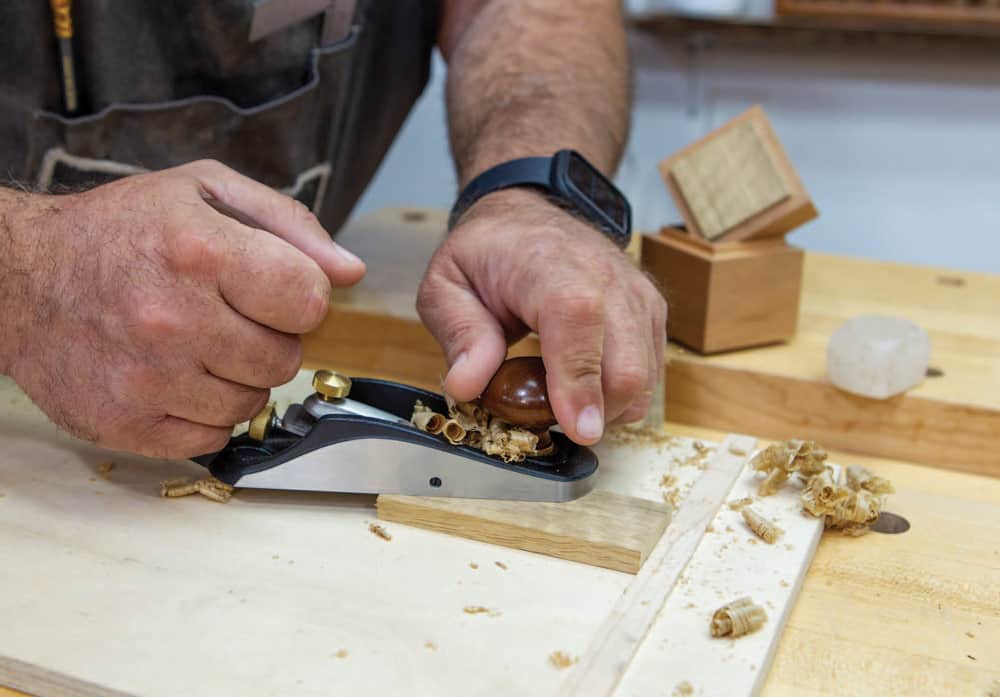 I like working on smaller projects such as boxes or small cabinets because they involve more detail and require more attention. However, smaller work is better achieved with suitably sized tools. I’m not talking about the miniature tool line that Veritas has, but rather their Bevel-Up #1 plane.

I’ve looked at getting a #1 in the past but it would have been more for just “having it” rather than having a work­ing plane. Both Stanley and Lie-Nielsen have had similar products, but they were the more traditional bevel-down configu­ration. While I don’t have large hands, it was hard to hold such a small plane because the blade assembly gets in the way of a decent grip. The Veritas version lowers the blade, allowing either a one- or two-handed grip.

The plane comes with all the features found on other planes in Veritas’s bevel-up line. There is no compromise when it comes to the adjustability of this plane. It has a Norris-type adjuster along with an adjustable mouth complete with the locking knob. It also includes the toe-stop screw that halts the toe piece from crash­ing into a freshly sharpened blade. Since this screw is rather small, accommoda­tion has been made for the use of a small hex wrench for setting it. Like its larger siblings, it comes with a pair of set screws that center the blade at the mouth. The plane’s sole is just under 2″ wide and just shy of 6″ long. The bed angle is 15° and, along with the 25° blade, has a cutting angle of 40°. Speaking of blades, it can be bought with an O1 blade at $249 or for an additional $10 the PM-V11 blade. Both blades are 1-7/32″ wide.

Out-of-the-box fit and finish are what you would expect from Veritas. It took very little effort to have the blade cut whisper-thin shavings with water stones. If you have hands as large as Arnold Schwarzenegger, this is not the plane for you. It may seem obvious, but you don’t want this plane as a substitute for a jack or a 4-1/2 smoother unless you’re looking for a workout.

I’ve found it useful on small boxes or even localized smooth­ing on larger surfaces. It’s easy to hold your work with one hand and use the plane with your other. I’m surprised at how many times I’ve reached for it over my small bevel-up smoother, also from Veritas. I’ve also found it different from the cutting action of a block plane. The vertical handle and front knob give it a (pardon the pun) smoother action. It’s easy to work small parts or solid trim on veneered pieces. Even small end grain work on a shooting board feels good. I haven’t tried it on inlay yet, but it is light enough to have a feather-like touch on delicate work.

The plane is comfortable to use and the words light and nimble come to mind when describing it. The smaller sole allows it to be better balanced on smaller pieces. As the saying goes, good things come in small packages. This plane and I agree. Fully Adjustable – The Veritas #1 is well-equipped. A Norris-type adjuster, along with an adjustable mouth and side set screws to keep the blade centered on the opening, will have this plane working smoothly for a long time. 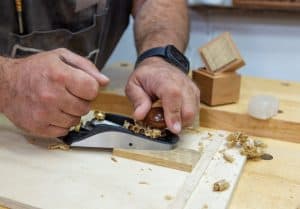 One Hand Only – While the plane is comfortable to grasp with two hands, it can also be used single-handedly. 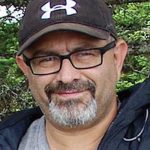