Woodturning Tools for a New Turner 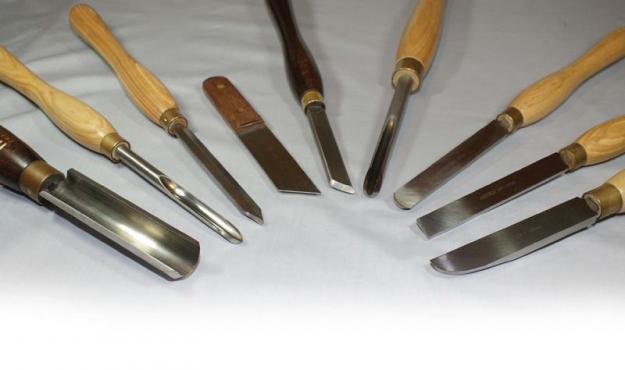 Selecting the tools to buy when you first start woodturning should depend on which of these types of woodturning you want to do. Generally, the pieces turned between the centers on the lathe require different tools than pieces turned on a faceplate. Some, but not all tools can be used for both. That said, I suggest that a new turner start by turning between centers because the techniques for doing that are the foundation for all cuts used in woodturning. Turning between centers can also be slightly less daunting for a beginner. This article suggests tools for starting both of these types of turning, describes the basic features and gives some ideas on how each tool is used.

In my opinion, it is very important to buy the best tools you can afford. I have gone the route of buying cheap tools and most of them are now relegated to a back shelf somewhere. Cheap tools are usually made of lower quality steel that will not hold a sharp edge for very long, which can be discouraging. They’re often not well balanced, which makes clean cuts harder to achieve. As with any other craft, good quality tools are easier to use; they produce good quality cuts and good quality results.

Most tools are not sharp when they come from the store and will require sharpening before use. Also, the cutting edges of some tools will require reshaping to create a more useful tip profile. I will not discuss tool sharpening, bevel angles and tool tip configurations as it is beyond the scope of this article. A lot of published information is available on those subjects.

I also recommend that beginners resist the temptation to buy a beginner’s set of tools. Most of these sets contain tools that will probably never be used. I feel that it’s much better to spend the same amount of money and get fewer, better quality tools. Additional tools can be bought later when skills are developed and the type of pieces to be made is decided.

The first tool that a new turner should buy is a full-face shield. When you start to learn to turn, things can happen very fast; face protection is imperative. I prefer to use a face shield rather than a set of goggles because I want to protect my complete face, not just my eyes. Also, it’s a good idea to get some dust masks or a respirator, which should be worn at the very least when sanding.

There are many other woodturning tools that can be added to the tool kit later. Many tool manufacturers make and sell specialty tools for specific purposes. However, I recommend new turners to concentrate on learning how to use a few tools well, rather than buying a lot of other tools, until a specific need is determined.

A spindle roughing gouge is used for roughing out a blank that is held between a drive center in the headstock and a live center in the tailstock from its original square shape to a rounded cylinder. It can also be used for cutting shallow coves in the spindle’s surface. The side cutting edge of a sharp SRG where those parts of the tool are ground flat can be used almost like a skew to create a smooth surface on the cylinder. 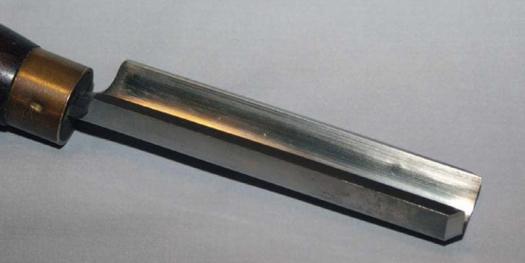 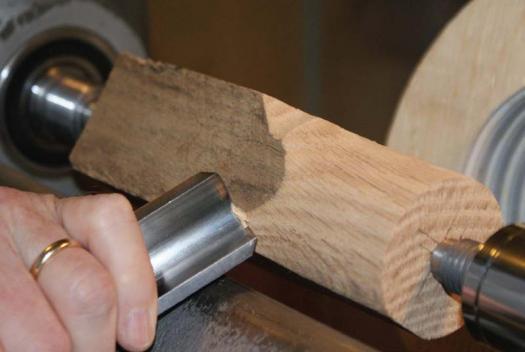 A spindle gouge, sometimes called a shallow fluted gouge, is used to cut the detail features like concave curves or coves, convex curves or beads, and variations of these cuts. A spindle gouge is usually ground into a shape that looks like a “lady’s fingernail”, where the sides of the tip area are ground back. This makes the tool more versatile. Various bevel angles are often ground on them but I suggest using a 35° angle to start.

A detail gouge is a variation of a spindle gouge where the main differences are a shallower flute with longer fingernail grind with a 30° or finer bevel angle to make the tool more versatile for cutting crisp details. The flute has a heavier cross section to allow a longer extension over the tool rest while cutting. Many turners feel that these two gouges are interchangeable. 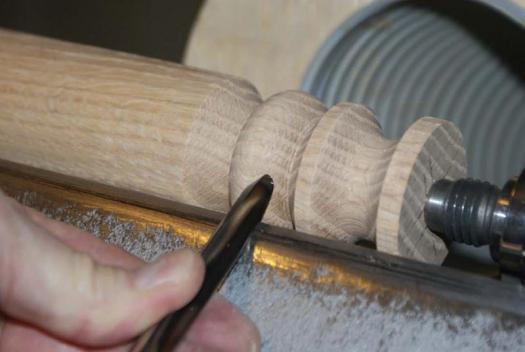 A diamond-shaped parting tool is used to cut off waste wood and separate parts of a turning. It is also used with outside calipers to establish diameter dimensions on a spindle. It can be used to cut small flat areas. The narrow side of the tool is placed on the tool rest and the cutting edge is presented above the centerline of the piece and is levered upward to start the cut. 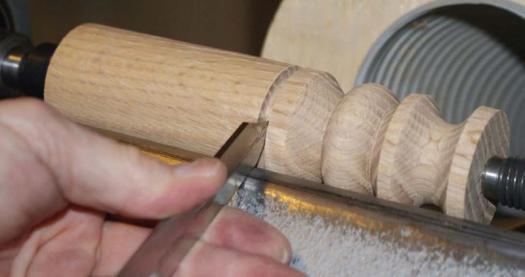 A narrow parting tool is very useful for cutting apart sections of a turned piece box when trying to match grain since the lines will be closer to their original configuration. It is limited to parting off small turnings because of its short blade length. This tool is usually 1/16″ (2 mm) thick and 1 ¼” (32 mm) wide and is shaped with a 45° angle. Care must be taken to prevent binding on the sides as a cut is being made. 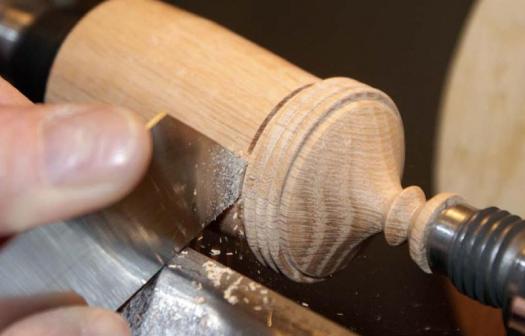 The surface of the cylinder will be smoother when a skew is used to make the cuts rather a spindle gouge. However, there are specific cutting techniques that must be learned in order to use a skew successfully. A skew has two bevels and is available in various configurations. I prefer a ¾” (19 mm) wide by ¼” (6 mm) thick skew with a slightly curved cutting edge. I feel this type of skew is less aggressive and cuts shallow coves on spindles a little easier. Skews are available with a straight cutting edge if preferred. I feel that it is a good idea to either buy a skew with the side edges round or grind the sharp corners off to reduce the tool’s tendency to bind on the surface of the tool rest. Some skews have an oval cross-section that can be useful for cutting curves but can cause difficulty when trying to get an even surface on the cylinder. The cutting edge is usually ground at a 45° angle to the side of the tool. 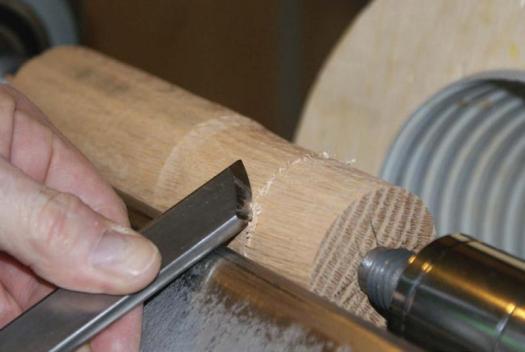 A spindle roughing gouge must never be used for faceplate turning. Using a SRG to rough out a bowl blank may result in a serious catch that could break the handle tang of the tool off when the square corners of the gouges cutting edge catch on the blank. The result could be a serious injury to the turner. It can also break off large splinters of wood that can become dangerous spears as they fly away from the spinning workpiece.

There are basically four tools that can be added to the starter set for a new turner who is planning on doing bowl/faceplate turning as well as spindle turning.

At first it will be difficult for a new turner to prevent leaving tool marks and rings on the bowl surfaces. Scrapers are generally used to remove these tool marks.

I grind the bevel angle on my scrapers to about 60°. Since all scrapers cut with a burr that is created on the cutting edge when they are sharpened, they must be kept sharp. The burr only lasts a very short time. Scrapers are presented to the wood surface at just below the centerline of the blank, with the handle held higher than the tool tip. This creates a “reverse rake,” which produces a scraping action rather than a cutting action. By holding the cutting edge at about a 30° angle from the tool rest surface, slice-like shavings are created rather than dust. This results in a very smooth cut. This technique will take a little practice to perfect, but it is worth the effort.

Scrapers need to be quite sturdy as they will extend farther beyond the tool rest as they are being used. I suggest they be at least ¾” (19 mm) wide by ¼” (6 mm) thick. The tip should have a bevel angle of about 60°.

A bowl gouge is generally used to form both the inside and the outside surfaces of a bowl or platter. It can be used to cut deeper coves when turning spindles. The base side of the bowl blank is fastened to a faceplate with screws and the bowl surfaces are shaped with a bowl gouge. It is important to leave enough thickness at the base to allow the removal of the wood where the screw holes were made. After the inside of the bowl is completed and finished, it is removed from the faceplate and a scrap piece of wood is mounted to make a jam chuck onto which the bowl is reverse-mounted with a tight fit. The bowl gouge is then use to complete the bottom and refine the base.

I suggest a ½” (13 mm) bowl gouge for this work. It has a sufficiently rigid shaft that will reduce vibration as it reaches over the tool rest into the bottom of the bowl. I prefer a “fingernail” grind on my bowl gouge with a bevel angle of about 60°. If the nose of the gouge is ground much shallower than that, it will be hard to shape the bottom of the bowl without having a catch. A lot of turners have a second bowl gouge with the tip ground somewhat straighter across with a steeper grind to allow easier access to turn the bottom of a bowl. The decision to buy a second bowl gouge can be made later.

The bowl gouge is probably the most used tool in a turner’s tool kit. It is also the tool that has the most variations in the shape and grind configuration of all woodturning tools. 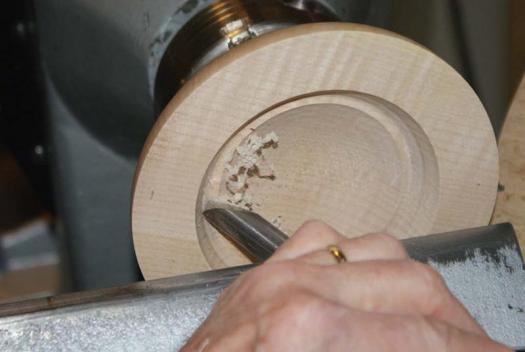 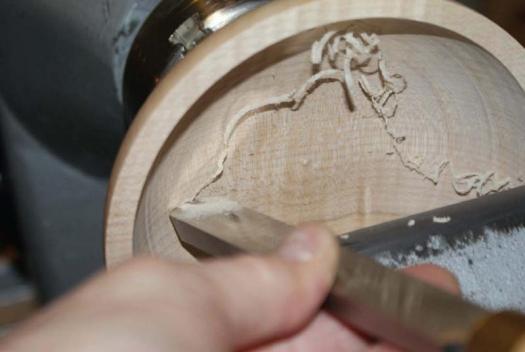 One of the most useful tools in the bowl/faceplate turning tool kit is a side-radius scraper. It can be very helpful for creating a smooth flowing curve on the inside surface of the bowl from the center of the bottom to the inside edge of the rim. This tool has to be very robust; I suggest it be at least 1″ (25 mm) wide by ⅜” (10 mm) thick. This scraper has a rounded tip that extends back along one side to allow a longer cutting surface that yields a more even and continuous scraping cut from the center to the rim on the inside of the bowl. 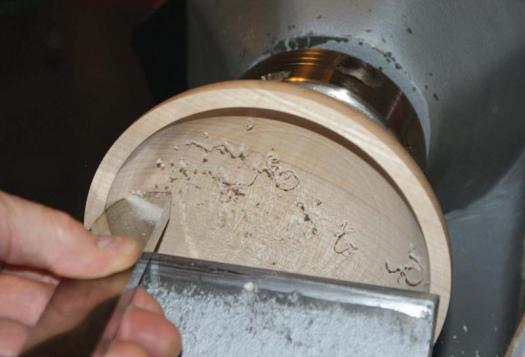 The square-end scraper is used to remove the tool marks from the outside surface of the bowl by using the reverse rake technique and scraping the wood directly at a 90° angle. The handle of the scraper will have to be continuously moved or a flat spot will appear on the surface. 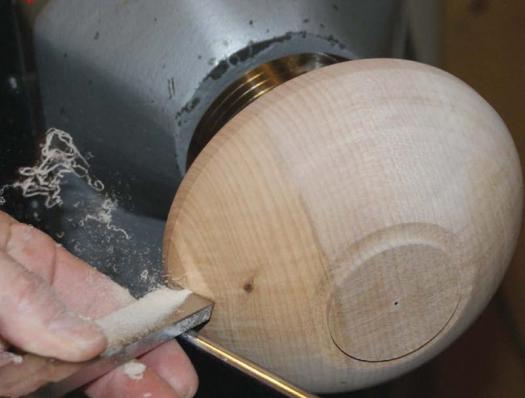 A new turner can find the selection of a starter set of tools very confusing. A new turner who starts with the basic spindle and bowl/faceplate turning tools will be well on their way to having the tools to become a proficient woodturner.

A valuable resource to help a new turner learn correct techniques for using any of the tools I have mentioned is to see someone using it either in person or on a video. There are countless videos on YouTube that will assist a new turner. Also, the American Association of Woodturners has many woodturning guilds all over North America where members are more than willing to explain various woodturning techniques. A quick Internet search will locate a local chapter.

As turning skills increase, the results from using these tools will be more satisfying and the new turner will have a better understanding of what other specialty tools to buy. 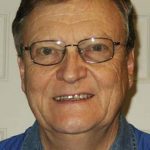