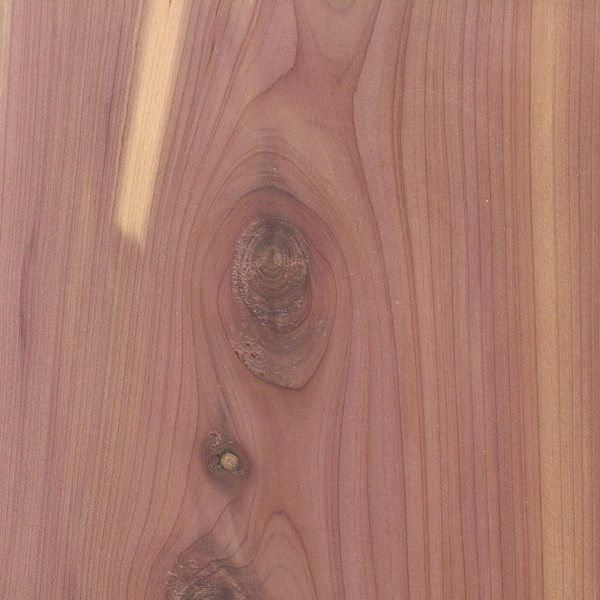 Aromatic Red Cedar is a unique tree in that its reputation derives almost entirely from its distinct aroma. This pleasant and useful odour is produced from oils present in the wood and leaves. The scent can protect natural fibres such as wool and cotton from moths and other insect pests; hence its use in cedar closets and cedar chests. This scent can also absorb unpleasant odours and will dissipate leaving clothing articles smelling fresh. The same effect is possible in luggage, drawers, and sports bags by using aromatic cedar shavings.

It is a prolific species, fast growing and abundant. Aromatic Cedar is found in eastern North America, south of Ontario and Quebec to the Gulf of Mexico, and east of the Great Plains. It can be a long lived tree and historically produced some large specimens. Today, it is a smaller tree, typically growing to 65 feet in height with diameters up to 3 feet. In poor soils it is more of a bush – better soils produce a dense tree with branches reaching down to the ground.

Aromatic Cedar is a pioneer species, being one of the first trees to populate degraded, cleared, and eroded land. Its quick growth rate can crowd out other plants. Consequently, it can be considered an invasive species. It is also very susceptible to fire. Natural populations are kept in check by forest fires which travel up the lower hanging branches.

The wood itself is straight grained, but the lumber is usually knotty, so irregular grain is often present. It has a medium to fine texture depending on the age of the tree and associated growth rates. Some trees have a high silica content which can dull tooling. The sapwood is a pale yellowish-white with the heartwood a pinkish to purplish-brown. The overall colour pattern is distinctive, with swirling colours and the pale heartwood weaving in and out of the heart.

Finding clear knot-free lumber can be a challenge. As a consequence, Aromatic Cedar finds limited use in fine furniture and general millwork. Its rustic appearance has never stopped it from being used in cedar closets and chests. The wood’s durability makes it a desirable wood for fencing and other exterior applications. Until recently, it was the preferred wood for lead pencils. It is also used for long-bows.

Aromatic Cedar both glues and takes all finishes well. Since most woodworkers utilise it for its aromatic properties, it is typically left unfinished. The scent can be renewed by a light sanding to bring fresh oils to the surface. The ability to renew these oils means most cedar chests and closets have a long lifespan.

This species can produce allergenic reactions. The oils can produce a mild skin rash in susceptible individuals. Despite these concerns, Aromatic Cedar can be a useful adjunct to any woodworkers list of desired woods. It can supplement many furniture projects when used as a liner in drawers and boxes. And, who doesn’t desire an authentic cedar chest? Aromatic cedar is also one of the most sustainable trees we have, and all woodworkers should be encouraged to work with it.