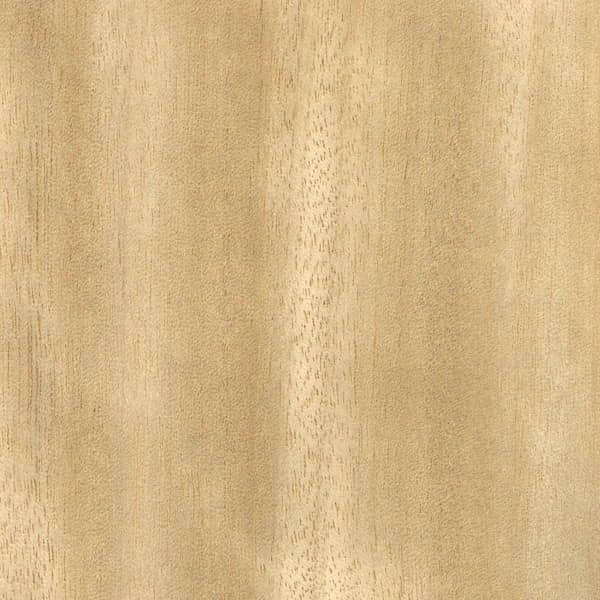 There are few woods that compare to Avodire when it comes to the number of spectacular figures available to the woodworker. Wood and veneer showing bird’s eye, block mottle, crotch, curly, fiddleback and swirl configurations have all been produced by this African tree.

Avodire is native to west central Africa, with countries of the Ivory Coast being the prime producers. Avodire grows to 115 feet high with trunk diameters of 2 to 3 feet. It is known to produce clear boles up to 50 feet in height. It prefers moist environments and is typically found near lakes and rivers.

The wood of Avodire is usually a pale yellow to a light brown. It is light sensitive so it will darken when exposed to light. The heartwood and sapwood usually have the same colour with no sharp demarcation between them. The wood has a high luster and the best Avodire is a metallic almost buttery yellow.

Avodire is a diffuse pored wood with indistinct growth rings. The grain can be straight, wavy or irregular. The different types of grain are one of the reasons Avodire can produce so many figure types. The texture is medium to fine and as mentioned above, Avodire has a natural luster.

The wood is relatively light with a good strength to weight ratio. Avodire dries rapidly and care must be taken to avoid warping and checking during the drying process. Once dry, Avodire is considered a stable wood. The heartwood is not durable, so Avodire is best used for interior applications.

Most woodworkers will come across Avodire as a veneer with lumber more difficult to source. The solid material is easy to work by hand or machine. Figured material is harder to work with as tear out a distinct possibility. Cutting angles of 15 to 20 degrees are recommended for figured pieces. Feed rates should be monitored as well. It glues well and takes all finishes with no problems. Nails and screws should be predrilled to avoid splitting the wood.

Solid Avodire is used for fine cabinetry, architectural millwork and decorative objects like humidors. Avodire excels as a veneer which is where all of the most dynamic figured wood appears. It is particularly known for a broad rope curl with a diagonal barber pole presentation. Avodires luster also accentuates the figure giving the wood an active appearance. Avodire veneer usually shows up in high end wood working such as elevator cabs, yacht and plane interiors and custom architectural millwork.

Avodire is a popular choice for marquetry projects. Marquetry is the art of creating images using cut pieces of veneer. The images can be abstract or representational. Avodires yellow colouring and interesting visual figure can be used to create clouds, sunsets, etc. Avodire can also be used to create inlays and stringing for furniture projects.

Avodire is easy to find as a veneer. Price will depend on the amount of figure present with the most highly figured veneers commanding the highest prices. Solid Avodire is a little harder to find. Expect to pay about the same as you would for other mid-priced exotics such as Paduak. While Avodire is not on the CITES list, it is on the IUCN Red list. I always recommend using a reputable dealer when purchasing imported hardwoods. Their continued business is dependent on following all international protocols for importing exotic woods.

Demand for Avodire appears to be cyclical. Furniture made from Avodire is more common in warmer climates where lighter coloured furniture is popular, and it goes in and out of fashion elsewhere. Nevertheless, if you are looking for a wood that provides a burst of colour or figure for your next project, Avodire is a great choice.