The Banksia pod is probably the most bizarre looking item to land on the bench of any woodworker. Difficult to describe, they bear a faint resemblance to a large pinecone, albeit a psychedelic one. However, the Banksia tree is not a pine or nor is it closely related to them.

The pods are oblong shaped, 4-16” long with a diameter of 2 to 4 inches. The surface has a mottled texture, punctuated by randomly spaced ‘eyes.’ These eyes consist of a pair of lips which open when the pod ripens, spilling seeds onto the ground. The outer husk is usually turned off, revealing an inner core with a reddish-brown colouration.

Banksia pods are endemic to southwestern Australia. A few species ventured to Papua New Guinea and New Zealand. These expat species are either extinct or exist in small populations leaving all the other known species in Australia. The Banksia species range from small shrubs to trees approaching 60 feet in height. Most of the pods sold come from Banksia grandis which is one of the larger species. Banksia pods are a truly renewable resource as no trees are cut down to harvest the pods.

Obviously, at some point, an enterprising Australian wood turner saw a Banksia pod and decided to see what would happen when mounted on a lathe and turned. The results were promising and now all sorts of imaginative objects are being made from the pods. Handles, candle holders, small boxes, mushrooms, and other interesting turned decorative items are some of the objects I have seen. Each of these is unique as no two Banksia pods are the same.

There are a few points to consider if you want to work with Banksia pods. Banksia pods are inexpensive, so buy 2 or 3 to experiment on. Expect to make a few mistakes. The pods have no grain direction, so they will turn differently from wood. Removing the outer husk is messy. Large chunks can come off the pod along with a lot of fine dust which will coat everything in the vicinity of your lathe.

Some of the eyes may fall out while turning. Stabilising the eyes with cyanoacrylate glue before turning will help. Some woodworkers fill the eyes with coloured resins for an interesting visual contrast. Once you are past the outer layer, you will get to the inner core that gets progressively denser as you approach the center, and it is more amenable to turning. This material can be polished to high luster.

Most turners recommend turning at a high speed and the use of very sharp tools. They will dull so be prepared to sharpen them as you progress. With no grain direction, the process of turning will feel different. Turned details such as finials and stems will be weaker than those turned from wood. Banksia pods shrink uniformly as they dry and are stable once dried. They’re usually dry when purchased, so you can start turning once you get them home.

If you don’t turn, you can still work the pods. They can be crosscut into interesting coasters. You can split them in half to make small boxes. I recommend using jigs when cutting them on the bandsaw. This will prevent them from rolling and pulling you into the line of cut. You can also use power carving tools to remove the outer husk, revealing the inner core. You can then work the core with standard woodworking tools.

Importing wood items with attached bark and seeds is difficult. You should buy your Banksia pods from established dealers to ensure the pods have been imported legally and have been properly treated to remove pests, etc. At this moment, supplies are consistent and there are no issues regarding sustainability.

Banksia pods are something I recommend woodworkers to experiment with. The Banksia pod provides a fun escape from working with dimensional lumber, blocks and squares. Thinking outside the box is an important skill as craftsperson; and with Banksia pods, the only limit is your imagination. 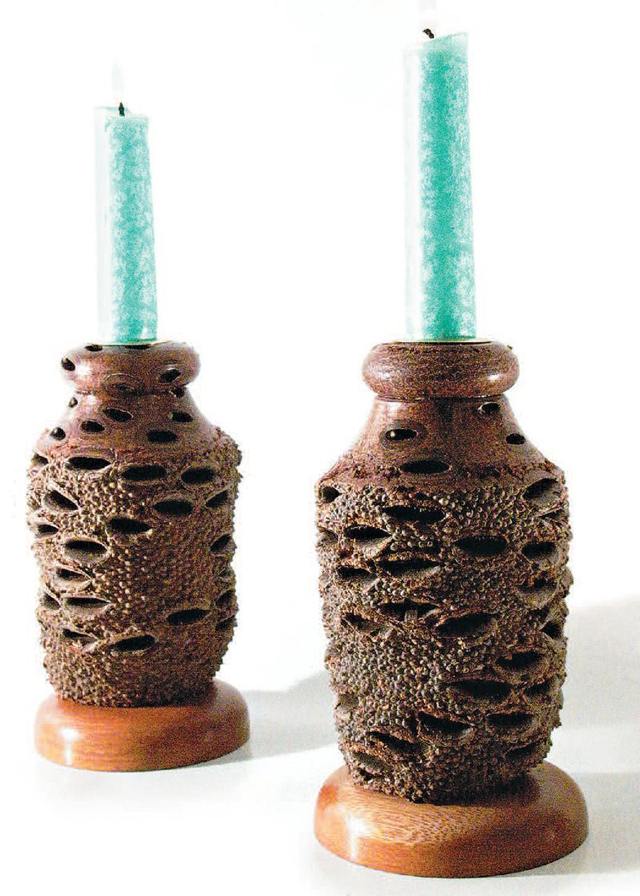