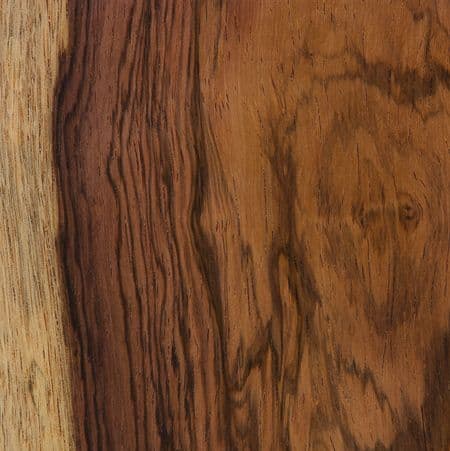 There can be no doubt that the Rosewoods are the most valued, most sought after and the most revered of the woods available to the woodworker. Whether it is their strikingly beautiful appearance, their seductive scent or even the lure of using a rare tropical wood, the Rosewoods found themselves incorporated into all types of woodworking projects from fine furniture to musical instruments. Ultimately, this has led to their downfall. Rosewoods are the most exploited wildlife products in the world, and all 300 species find themselves protected by a CITES level two designation. Hopefully, this will help curtail the illegal exploitation of these woods and help foster a resurgent population.

The story of the Honduran Rosewood is the story of all of the Rosewoods and neatly summarizes the history of this great family of woods. Honduran Rosewood is a medium size tree that grows up to 100 feet in height and up to 3 feet in diameter. It is harvested in Belize, Guatemala and southern Mexico. Like all Rosewoods, it is hard, heavy and dense. It is straight grained with a fine to medium texture. It also possesses the alluring ‘rose-like’ scent common to many Rosewoods and most evident in freshly cut wood.

The heartwood is a brownish-red to a more common brownish-mauve. There can be shades of purple as well as dark brown to black lines superimposed on top of the background colours. The sapwood is sharply demarcated yellowish white. It can contain small stable pin knots that resemble the ‘birds-eyes’ often seen in domestic maple.

Honduran Rosewood is suitable for fine furniture and all turnery projects. It possesses superior acoustic properties and that is its major claim to fame. Its bell-like tone when struck make it the wood of choice for marimba bars and xylophones. It is also popular in the luthier community for instrument finger boards as well as guitar back and sides. Some instrument builders consider it to be the best substitute for Brazilian Rosewood the standard for backs and sides.

It can be difficult to work and machine due to its high density. It will dull cutting edges and will ride on top of your jointer head. Tooling must be sharp and you must take small incremental passes when machining. Nails and screws must obviously be predrilled. The wood is oily making gluing a challenge. Too much clamp pressure will starve joints of glue. Acetone can be used to remove the oils in the wood but this must be done immediately before applying the glue as the oils can migrate back to the surface. Some woodworkers prefer to use epoxies instead, but they are expensive. The wood finishes beautifully, but the colours in the wood can bleed into adjacent surfaces if strong solvents are used.

Honduran Rosewood is rare and harvesting countries have imposed logging restrictions; however, this has failed to slow demand or stop illegal exploitation. This is where Honduran Rosewood exemplifies the story of all the Rosewoods. They are suffering from a seven fold increase in trade since 2005. The trade is driven by the Chinese market where a burgeoning middle class has demanded a distinctive style of furniture made almost exclusively with Rosewoods.

Illegal logging has supplied much of this demand and as stocks declined in Southeast Asia, the illegal traders turned their eyes to Africa, South and Central America. Honduran Rosewood was soon a victim and stocks in Central America began to plummet. This illegal harvesting not only affected Rosewood stocks but other species sharing the same forests. The entire Dalbergia genus was placed under the CITES II designation. Extensive permits are now required for importing and exporting these species.

Hopefully, given time these measures will stabilize the Rosewood populations and a recovery will begin. In the meantime, woodworkers looking for Honduran Rosewood can still find small blocks and squares as well as musical instrument parts. Shop at reputable dealers who can produce the paperwork to ensure your purchase is from legally obtained material. I have several small pieces of various Rosewoods which I will use judiciously, perhaps when making box, door or small tool handles. A little bit of Rosewood goes a long way. Even these small pieces will serve to remind me of this wood’s beauty and to be patient for the return of this historic family of woods.