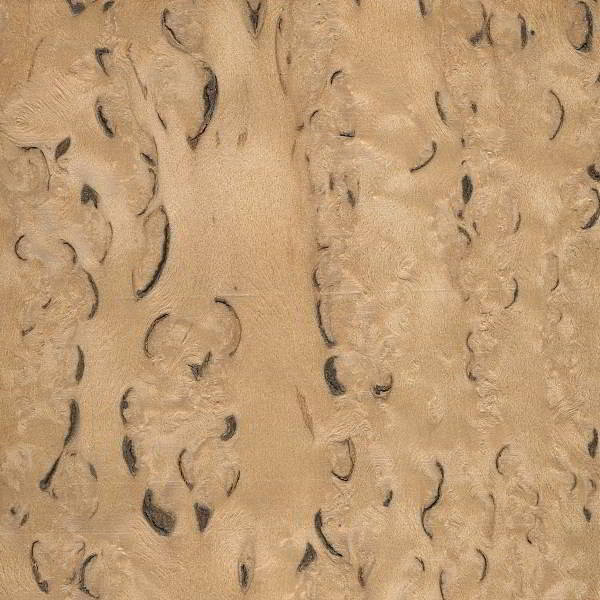 Growing in the forests of the Karelian region of Finland is a variant of the silver birch. It is not an impressive tree, small in stature, often appearing as a bush or large shrub. Some of these unremarkable trees a have areas of thickened bark on their trunks – the only clue that these trees contain wood with the stunning Karelian birch figure.

The Karelian figure (also referred to as Karelian burl and Masur birch), is hard to describe given that it’s unique to this species and its random appearance. Some say it looks like marble, others compare it to birds-eye maple or a dense burl figure. These descriptors don’t quite do it justice. I like to describe it as a sea of dark lined ‘sugar pops’ swimming on a lustrous undulating white background.

The Karelian figure was discovered by woodworkers in the 18th century and soon became popular with royalty and other people of means. It was used in fine furniture, decorative objects and palace interiors. Karelian birch is still popular today. Fine cabinetry, architectural panels, yacht and car interiors are some of its destinations. It is considered an excellent material for wood turning. Knife scales and other small objects benefit from its unique appearance.

Since Karelian birch is a variant of the silver birch, characteristics such density, hardness, and shrinkage rates are comparable. The non-figured material is straight grained with a fine texture. The wood has a large white sapwood with a distinct reddish-brown heart. It has a gentle luster. The trees are always cut in the winter to avoid sap staining the wood. Karelian birch is not considered durable, so it is limited to interior applications.

Recent research theorises that the figure arises from excess sucrose production and how the tree modifies its cellular structure to accommodate the extra sucrose. The figure radiates out from the center of the tree and is highly variable in intensity and even location within the tree. Within a given trunk you can find sections of dense figure separated by sections of little to no figure. It is also not uncommon to find the figure exclusively on one side of the trunk. The figured wood is always covered by thickened bark and this visually guides the harvesting of the trees and how the lumber will be cut.

Karelian birch trees are small in stature and trunk width. Heights are usually less than 50 feet with diameters under 16 inches. Harvested lumber tends to be short and narrow, even more so when the non-figured wood is cut out. Figured wood too small for lumber will be manufactured into turning blanks and squares. When working with solid wood it’s important to remember the figure develops radially. Only opposite faces of a piece of lumber will show the best figure, with edges of the lumber having a different appearance.

Karelian birch turns well with sharp tools and its fine grain holds details well. It will work well by hand or machine. Tooling with low cutting angles will help you deal with squirrely grain. You should predrill for nails and screws. Karelian birch will blotch when stained, so a pre-stain conditioner or the use of a dye would be preferred if you want to add colour to the wood. I believe that clear finishes are best as they won’t obscure the beauty of the Karelian figure.

The figure of this wood is organised radially, so Karelian birch presents best as a rotary sliced veneer. The logs have similar size restrictions on veneer making as they do in sawn lumber. You can expect to see veneer sheets that are very wide compared to their height. There will also be a nice repetitive pattern produce as the log makes one revolution on the slicer similar to unrolling a roll of paper towels. There should lots of smaller sized bundles perfect for small panels and boxes.

I don’t recommend rotary slice veneers like Karelian birch for iron on gluing as they show a lot of movement and can crack and distort when heated. You should use a proper veneer press, either mechanical or vacuum. A good quality glue that develops a strong glue line is best. Book matching veneers is difficult and could cause problems when finishing. Try to use veneers that don’t require any splicing and if you have match veneers use a slip match.

Karelian birch’s popularity meant it was overharvested and populations started to decline; however, the Finnish government responded with a management plan that will allow us to continue to harvest this beautiful wood. Despite all of the interventions, this outstanding wood will continue to be rare and expensive. I recommend that Karelian birch be used in unique and special projects that emphasize its visual allure and the surprising ability of nature to produce a wood that is stunning.