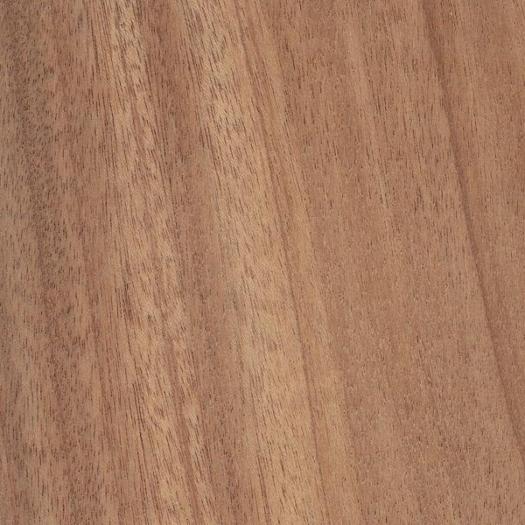 For hundreds of years, American Mahogany was the preferred timber for the world’s woodworkers. American Mahogany consists of two closely related species – Cuban Mahogany and Bigleaf Mahogany – which are revered for their workability, stability, and beauty. Sadly, these same characteristics led to their downfall as demand succeeded supply. Today, both these species are endangered and harvesting is protected by international treaty.

Woodworkers looked far and wide for an acceptable substitute. Many woods are sold and marketed as Mahogany today, including species such as Sapele, Utile, Spanish Cedar, and Luan. African Mahogany is perhaps the most common substitute, and unlike some of the other pretenders, it is in the same botanical family as American Mahogany. But, it is not a matter of simple substitution, as African Mahogany is a group of seven related species. Four of these species are commonly found in the workshops of woodworkers – the species that tends to predominate is ‘Khaya ivorensis’.

All seven of the African Mahoganies are common to West Africa, particularly the Ivory Coast, Ghana, and Nigeria. This is a group that can tolerate a wide range of climactic and soil conditions which produce lumber with a lot of variability. They can be large trees growing up to 150 feet in height with diameters approaching six feet.

The heartwoods vary from a light pink to deep reddish brown. The sapwoods tend to be paler and are usually not distinct from the heart. The grains are usually straight but interlocked. This will produce a nice ribbon stripe especially on quarter cut material. Density and hardness will vary depending on the species, but it is typically harder than the American Mahoganies.

The problem for the woodworker is to distinguish the good from the less desirable material. The best Khaya will have a rich red colour. The ribbon stripes should be made up of material of the same density, which will not tear out when passing it through the planer. Lower grade wood will ‘fuzz’ when planed. I would suggest taking some quick passes with a hand plane on rough material before buying. This will reveal the colour and working characteristics. The lesser grade wood also tends to be higher in silica, which will dull tools, and it is often very brittle. Material from plantations can produce wood with a lot of tension. In general, avoid wood with wide growth rings, larger pores, and lots of pin knots. Working with reputable suppliers can increase your chances of finding the best material.

Once the appropriate material has been selected (similar colouring and density), African Mahogany can be a real joy to work with. However, it may need further seasoning, as it is usually dried to European standards of 12 to 15% moisture content.

After all that work you should be rewarded with a wood that is stable, glues well, and finishes beautifully. Like American Mahogany, it produces many interesting figure types from curly to some spectacular crotches. It also slices and peels well making it a popular choice for veneering. It carves beautifully and will hold intricate detail when machined.

Khaya is used in fine furniture, casework, architectural mouldings, and millwork. Luthiers now use it as a substitute for American Mahogany in musical instruments. Since it is a durable wood, it can be used in doors, windows, and other exterior applications.

Good quality Khaya can be the woodworker’s best friend. With beautiful figuring and lustrous colouring, it is a fine substitute for American Mahogany. Working with an honest importer and careful selection of material is the beginning of a fine woodworking