Bocote, like its close relative Ziricote, is a very beautiful wood with a unique appearance. The heartwood is an attractive yellowish-brown overlain with distinctive black lines giving the wood an active and striking figure. Subtle birdseye figures can appear and when quarter cut, bright ray flakes shimmer on the surface. Up to six species are harvested and sold as Bocote, with Cordia elaeagnoides the most commonly seen by woodworkers.  Botanical considerations aside, appearance and workability are the properties desired by craftspeople. Harvesting occurs mostly in Mexico and other countries of Central America. Some of the logging is done selectively with mules, which helps maintain a sustainable resource by avoiding clear cutting. 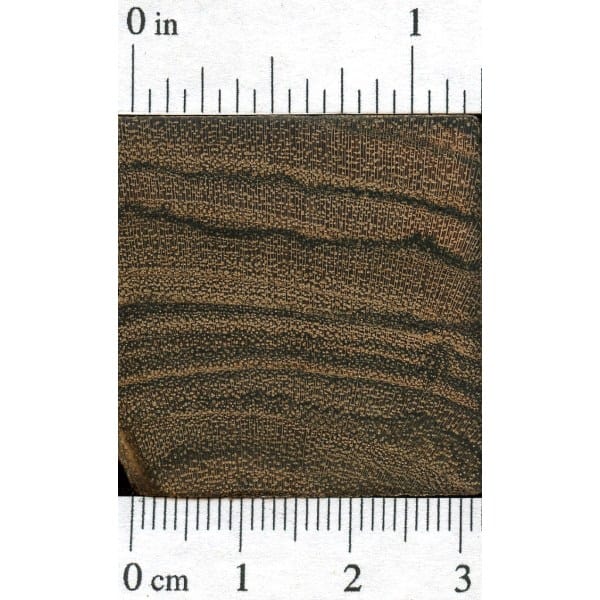 Bocote tends to be a modest tree, 65 – 100 feet in height with 3 – 5 foot diameters. The wood is waxy with a distinct dill pickle odour when cut. It is difficult to dry, probably due to the oils which inhibit the regular movement of water out of the wood during the drying process. Large, thick pieces are especially prone to degrade, showing surface and end checks during drying.  Slow, patient air drying is the preferred method of seasoning and once dry, Bocote is dimensionally stable.

Bocote is easy to work both by hand and machine. Silica deposits are occasionally present which will dull tooling. The grain is mostly straight, sometimes interlocked. The wood’s texture is considered medium and uniform. It has a natural luster which adds to its visual appeal. Despite its waxy nature, it is easy to glue without any problems; however, this property will cause sandpaper to clog so surface preparation will take time and patience. It turns and finishes with little difficulty. Unlike maple, Bocote’s birdseye figure will machine without tearout.

In Central America, Bocote is used for house construction, trim, flooring and cabinetry. Wood for export from Central America tends to be smaller pieces and turning blanks. In North America, it is used for decorative objects, small turnings, boxes, panels, gun stocks and musical instruments. Bocote’s attractive grain makes it an excellent choice for book matched panels. If this is your preferred use, thin kerf blades should be used for ripping the consecutive pieces required for book-matching. You need a small kerf to minimize pattern shifting.

Some woodworkers have shown allergic reactions to Bocote. This usually occurs after they have been sensitized to known allergenic woods such as Pau Ferro and Cocobolo.  I would recommend always using dust masks and good shop hygiene to avoid such problems.

Bocote can be expensive; but given its visual appeal, it is cheaper than comparable rosewoods. Unlike species of rosewood family, Bocote is not considered endangered and is not protected. This could change as woodworkers look for rosewood substitutes. Bocote is a species that gives woodworkers the ability to create striking pieces. A little goes along way and Bocote is an excellent choice for that special project.