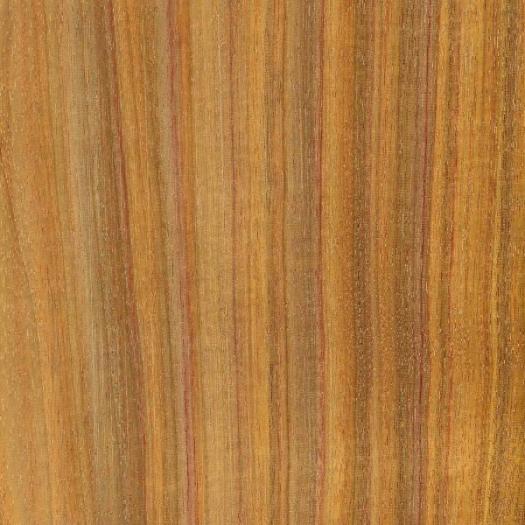 Eye-catching is the best description for Canarywood. The heartwood colouration may vary, but it is always dramatic. It starts with a base colouring of yellowish orange, sometimes shading to a reddish brown. Overlaid on top are contrasting streaks of black and dark brown. The sapwood is a pale yellow that is sharply demarcated from the heart. Canarywood grows from Panama in central America south to Brazil. They typically grow to heights of 60 to 100 feet with diameters of 2- 3 feet. Exceptional specimens may be 4 feet in diameter. It is a member of the legume family, so the seeds are contained in pods that can resemble maple keys. The name Centrolobium refers to the leaves which are many lobed.

In addition to its striking colour, Canarywood is usually straight grained occasionally irregular with a fine to medium texture. It also has a nice natural luster. Given its equatorial home, the wood is diffuse pored with indistinct growth rings. Unlike temperate trees which exhibit seasonal growth, the cells of the tree that grow vertically (also called pores) are not organised into areas of early and late growth. This makes the growth rings hard to discern.

The wood is highly resistant to fungal attack. Canarywood is also resistant to insects and marine borers. It has been used in the making of boats, utilized as wood for keels and planking. Given its dramatic appearance and stability, Canarywood is also used for flooring, cabinetry and furniture. With its fine grain it turns well and is used for items such as pen blanks and decorative turned objects. Canarywood is also purported to have superior acoustic qualities so it is used in high end speaker cabinets. Luthiers are also beginning to incorporate it into stringed instruments such as guitars.

Canarywood works well by hand and machine. Irregular grain may tear or chip. Tools and cutters should be sharp with feed rates closely monitored. There should be no problems with gluing as Canarywood is not oily like teak or the rosewoods. Nails and screws should be predrilled to prevent splitting. Overall, working with Canarywood should present few problems.

Since most woodworkers will purchase Canarywood for its appearance, finishing should be approached methodically. All woods will colour fade with time as exposure to light and oxygen will take their toll and Canarywood is no exception. Film finishes especially those that inhibit UV light will help preserve and delay colour changes. Oil based finishes will not offer the same degree of protection. Lacquers and marine spar varnishes are your best bet for a successful finish.

The only other hurdle is with nomenclature. There are over 40 species within the Centrolobium genus that can be grouped together and called Canarywood. While this group is fairly uniform in appearance there are a fair number of unrelated species that are also called Canarywood. I recommend using a reputable specialty wood dealer to help guide you in making the correct purchase.

Canarywood is not considered an endangered species. It is not on the CITES list or the IUCN red list. Pricing is moderate for an imported species. Plus, it is usually available in a variety of lumber sizes as well as turning blanks and assorted squares. If you want a little visual ‘pop’ in your next project consider Canarywood.